Was Great Grandfather Gabriel Loyal to the United States 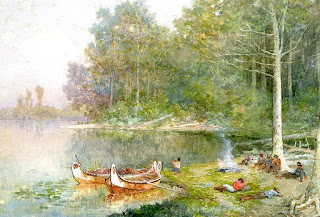 He is said to have died young (age of 37) on 19 AUG 1807 at LaPrairie-de-la-Madeleine (Notre-Dame), Québec.  It is unclear if he was actually buried in LaPrairie.

On 11 Aug 1797, Gabriel signed a voyageur contract to go to Michigan for a trading company owned by brothers Jacques and Francois Laselle:

Brother of Colonel Francis and Antoine Lasselle, Jacques was the most enterprising and shrewdest Indian trader of the three brothers, and became by far the wealthiest man in the Territory outside of Detroit. He always had in his employ a large number of Indians, half-breeds and Canadian Frenchmen. Some forty log houses were built by him on the north side of the River Raisin, about five miles above the then town of Frenchtown, now city of Monroe, on the land known as the Caldwell tract.

As late as the year 1836 forty-five farms, mostly on the north and south banks of the River Raisin, were owned by Mrs. Major Caldwell, inherited from her father, Jacques Lasselle. At an early day quite a controversy arose between the settlers located on the Caldwell tract (it being quite a village) and those on the banks of the River Raisin (constituting now the city of Monroe) as to where the first Catholic church should be placed. A compromise was effected by locating it midway between the two on the Momonie and Hivon farm, two and a half miles above the city,

The Lasselles were natives of Montreal, allied and related to the celebrated explorer and adventurer, Robert De La Salle, prominent in all histories and sketches of the early explorers and adventurers in the northwest territory. The Lasselles made all their purchases at Montreal for stocking their trading-posts and stores with goods and merchandise for traffic with the Indians, and transported them by large pirogues and canoes, or small boats manned by four or six half-breeds and Frenchmen.

On one of the return trips Mr. Jacques Lasselle accompanied his two daughters, Marie Antoinette and Julia, to Montreal, and placed them in the convent, where they remained a number of years and returned very attractive and accomplished young ladies. Julia married a Mr. Percy, died young and without issue. Marie Antoinette inherited the large fortune of her father, and married Major Caldwell, an officer of the British army. 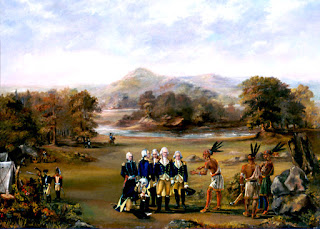 During the signing of the Treaty of Greenville (Northwest of the Ohio River) August 3, 1795 A treaty of peace between the United States of America, and the tribes of Indians called the Wyandots, Delawares, Shawanees, Ottawas, Chippewas, Pattawatimas, Miamis, Eel Rivers, Weas, Kickapoos, Piankeshaws, and Kaskaskias.  Jacques Lasselle was a sworn interpreter.

From the time I have had the happiness of breathing the pure air of American liberty I have ardently wished to be useful to the government of a country which has become mine. I have employed every means in my power to be serviceable to it. General Wayne might have given a faithful testimony of it, had the fates allowed him to return into the bosom of his country, there to be crowned with the laurels his valor had merited. What brought me to the acquaintance of General Wayne was the capture of one of my uncles in an engagement, near a place called le pied des ravines on the Miami river. the army having returned to Fort Wayne, the General wrote me two letters to beg me to use my influence over the Indians to dispose them to make peace. I then abandoned my own interests to serve the U.S. and my trade with the different Indian nations being very extensive, I immediately directed my agents to act accordingly, and on my part I distributed a quantity of glass beads to invite them to make peace. I prevailed on a great number of them to go with me to Greenville. during the summer I was obliged to go twice from Greenville to Fort Defiance to dispose the rest of the Chawoinons in favor of the Americans, for without this nation the others could do nothing. Some Royalists and especially a party of Indians called thefive nations opposed themselves powerfully to our pacific propositions; but notwithstanding their efforts I prevailed, and the Chawoinons were soon followed by the others; they consented to return to Greenville to negociate with General Wayne. There I took care to maintain the Indians in their good dispositions, and I even served as Interpreter for the U.S. as you may have seen in the treaty. Peace being concluded, General Wayne proposed to me to accept the pay of the U.S. as Intendant pro tempore of the Indian Department, and offered me five dollars and five rations a day. My answer was that, if he could secure me that station for several years, I would abandon my trade to devote myself entirely to the service of the United States, but that I could not do it for a short time only. he then told me that, as he was going to the seat of Government, he would represent to the President the important services I had rendered the U.S. and that as he thought me, in every respect, qualified for the employment he had proposed, he would do all that lay in his power to procure it for me. But unfortunately death, by cutting short his days, at a place called la Presqu’ile on lake Erie, deprived him of the satisfaction of being useful to those who had been serviceable to him. After the death of General Wayne, which I bitterly lamented, seeing that the peace which he had concluded with the Indians appeared lasting, I again gave all my attention and cares to my trade which I have continued to this day. But at this moment the murmurs and discontentment of the Indians, awaken my attention, and it is on this account that I take the liberty of writing to you. Since the treaty of Greenville, the Government has purchased large tracts of Indian land about the Illinois at post St. Vincent, and even last year, at the rapids on the Miami a treaty was made with the Indians for a certain portion of their territory. Now the Indians complain that the purchase of these lands was not according to the treaty of Greenville, that those who sold them had no right to do it, and that even a great portion had been sold without the consent of their principal chiefs. this is the principal cause of their dissatisfaction, which has alarmed a great part of our citizens and, I might say, the whole country in general. I know, for having seen it myself, that thirteen nations from the upper Mississippi and that neighbourhood, have sent to the nations near Detroit, the Delawares, Chawoinons, and Hurons or Windots, a present of beads to invite them to join them, in order to unbury the tomahawk and strike upon the Americans. I saw these beads and gave notice of it to the Secretary of the Governor, he being then at the Federal City. These three nations answered the envoys of the thirteen nations, that they were sorry they could not accede to their proposition, that they prefered to live in peace, that the circumstances in which they were, did not permit them to make war, and that besides having entered into a treaty with the Americans, they would endeavor to maintain peace and harmony with them, and that in consequence of this they entreated them to bury again their tomahawk and not to speak of war, unless they proposed it themselves. since that, and particularly this spring, a great many rumors have been spread among the whites, which have alarmed many of the American posts, which have prepared themselves for a vigorous resistance in case of an attack from the Indians.

In the present State of things, I offer my services to the U.S. to be employed in the capacity of subintendant of the Indian Department for the territory of Michigan. Being perfectly acquainted with the Indians, with their customs and manners of proceeding, having it in my power to know, by several Chiefs who look upon me as their great friend, every thing that is going on among them, even in their most privy councils, having a perfect knowledge of their languages, which I speak with facility, and moreover having (during one and twenty years that I have traded with them), gained their esteem and confidence, I flatter myself that I could be of great service to the U.S. in this employment, and this is the only reason for which I venture to make the demand of it. In this I am not actuated by any sordid views of interest, for it is well known, that in the situation in which I find myself, I have no occasion for a public employment, but the ardent wish of serving my country, and the great satisfaction which a good citizen must find in becoming useful in the charge that is entrusted to him, are the motives which direct my steps. I did not wish to employ any of my friends to solicit your Excellency in my favor, as this employment can only be given to a man of capacity and of a good character. I can procure all the recommendations your Excellency may require.

If you condescend to honor me with an answer, I will consider it as a great favor, and you will confer on me an infinite obligation.
Sir, &c &c
(signed) Jacques Lasselle

Homage to the United States signed by Francois Laselle 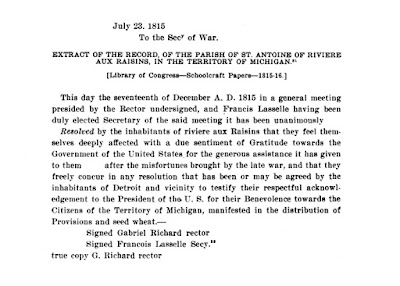 In 1815, following the end of the War of 1812, the brothers Jacques and Francois Lasselle paid homage to the United States when the Parish of St. Antoine of the Riviere Aux Raisins, in the Territory of Michigan sent its statement of Gratitude (above) toward the Government of the United States. 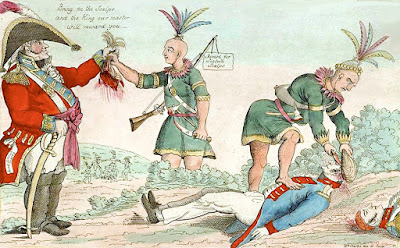 Where was Gabriel Pinsonneau in 1806

After the American Revolution everyone -- French, British, Americans and numerous Indian tribes -- were trying to control the fur trade in the Great Lakes region.

During the years leading up to the War of 1812 and during the conflict itself the Lasselle brothers had acted to support both sides -- British and American -- at one time or another.  In the end the Lasselles and their French and Indian alliances helped the United States win the war.

Was Gabriel, the voyageur, still in the Lasselle brothers' employee during Michigan Territorial Indian hostilities leading up to the war and did he fight in any of those conflicts?

I will probably never know the answer to this question, but his son, and namesake, Gabriel (1803-1877) my 3rd great grandfather, was the first Pinsonneau ancestor to emigrate from Canada to the United States just a few years later - about 1828.

The full crew of voyageurs engaged by Jacques and Francois Lasselle for the 1797 trip to Detroit included:

It is very likely that several of these men were related. The surnames GAGNIER, LEBER, SENECALE, DUPUIS and PINSONEAU can all be found in our ancestral tree.

Posted by Drifting Cowboy at 10:29 AM