ARE WE RELATED TO RENÉ-ROBERT CAVELIER, SIEUR DE LA SALLE

René-Robert Cavelier, Sieur de La Salle was a French explorer best known for leading an expedition down the Mississippi River, claiming the region for France.

Born in Rouen, France, on November 22, 1643, René-Robert Cavelier, Sieur de La Salle was an explorer best known for leading an expedition down the Illinois and Mississippi rivers. He claimed the region watered by the Mississippi and its tributaries for France and named it Louisiana after King Louis XIV. His last expedition to establish fur trading posts failed and cost La Salle his life in 1687.

EARLY LIFE
René-Robert Cavelier, Sieur de La Salle was born into a wealthy merchant family in Rouen, France, on November 22, 1643. When La Salle was 15, he gave up his inheritance to become a Jesuit priest. However, by age 22, La Salle found himself attracted to adventure and asked to be sent abroad as a missionary to join his brother, Jean, who had been in New France (Canada) for a year and was a priest of the Seminary of St. Sulpice.

LIFE IN NEW FRANCE
With no craft and no funds, La Salle was nearly destitute when he landed on the island of Montreal in 1667. He asked to be released from the Jesuit Society citing “moral weaknesses.” The Seminary of St. Sulpice had laid claim to areas on the island of Montreal and was granting land to settlers for protection against the Iroquois. Soon after his arrival, La Salle received a land grant. He quickly built a settlement, granted land to other settlers and initiated relations with the local natives. The Mohawks told him of a great river named the Ohio that flowed to the Mississippi and out to the sea. La Salle thus became obsessed with the idea of finding a river in North America that flowed to China.

EXPLORING THE GREAT LAKES REGION
About this time, La Salle befriended New France Governor Daniel Courcelle, the Count of Frontenac. Courcelle shared La Salle’s obsession with exploration, and together they pursued a policy of extending French military power across the Great Lakes. La Salle sold his settlement and in 1673 traveled to France to obtain permission from French King Louis XIV to explore the region between Florida, Mexico and New France.

By 1677, La Salle had prospered, controlling a large share of the fur trade, but relentless ambition drove him to seek more. He once again sailed to France to obtain permission to explore the western part of New France and the Mississippi in hopes of finding a water route to China. La Salle returned to Montreal with dozens of men and Italian soldier of fortune Henri de Tonti, who became his devoted disciple. By August 1679, La Salle’s men had constructed a fort on the Niagara River and built the ship Le Griffon for the journey down the Mississippi. The mission had to be suspended due to the loss of Le Griffon, most likely in a storm, and a mutiny by the sailors. (La Salle was reputedly callous in his treatment of those he deemed subordinate.) 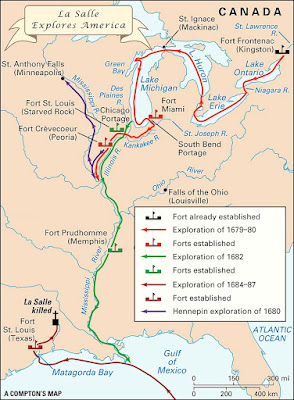 In February of 1682, La Salle led a new expedition down the Mississippi River. Along the way they built Fort Prod’homme at present-day Memphis, Tennessee. In April, they reached the Gulf of Mexico. La Salle named the region "La Louisiane," in honor of King Louis XIV, and cultivated important military, social and political alliances with Native American tribes in the upper Mississippi River area. On his return trip, La Salle established Fort St. Louis in Illinois.

LAST MISSION
On July 24, 1684, La Salle set out for North America with a large contingent of four ships and 300 sailors to establish a French colony on the Gulf of Mexico at the mouth of the Mississippi River and challenge Spanish rule in Mexico. The expedition encountered problems nearly from the start. La Salle and the marine commander argued over navigation. One ship was lost to pirates in the West Indies. When the fleet finally landed at Matagorda Bay (near present-day Houston, Texas), they were 500 miles west of their intended destination. There, a second ship sunk and a third headed back to France. The last ship was wrecked by a drunken pilot, stranding the remaining crew on land. In October 1686, La Salle took a small team of men and traveled up the Lavaca River trying to locate the Mississippi. Most of the men died. A second team set out but a few months later, a mutiny erupted and five men attacked and killed La Salle on March 19, 1687.

HIS LEGACY
Though René-Robert La Salle failed in his last mission, his expeditions built a network of forts from Canada, across the Great Lakes and along the Ohio, Illinois and Mississippi rivers. This defensive front line established the French territory in North America and defined its commercial and diplomatic policy for almost a century. His friendships with numerous Native American tribes assisted and supported French colonial settlers and the military up to the Seven Years’ War.

ARE WE RELATED TO HIM?

The Cavelier name appears twice in our family tree as the surname for both Perette, wife of Pierre Godefroy and Collette, wife of Robert LeBer. Their estimated birth dates are far enough apart that it is probable they have different parents.

Interestingly various sources link both women to the explorer Robert Cavelier de La Salle, though no direct evidence is yet available of a kinship between the three. The name "cavalier" is of French origin and means "knight, or horseman".

Given the facts that Perrette's two sons traveled with Champlain, and the Leber family were some of the earliest fur traders, it seems likely that both families were not only well connected in France, but had a family tie to La Salle.