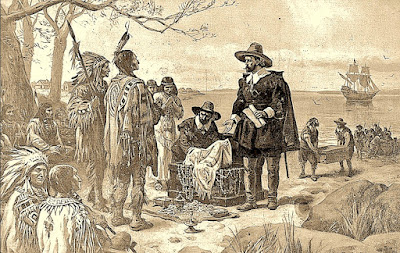 I have been researching our French-Canadian fur trade ancestors for nearly a decade, so last week I decided to see if I could find any fur traders in our Dutch ancestors from Albany New York.

As you know I found Jan Fransse Van Hoesen (1608-1665) our 9th great-grandfather who dabbled in the fur trade. SEE: http://a-drifting-cowboy.blogspot.com/2019/03/an-interesting-new-netherland-land.html

So, being an obsessive-compulsive genealogist I decided to see if I could find any fur traders in our New England ancestry.

I spent an entire day studying the fur trade in early Connecticut and Massachusetts.

Armed with the names of some early New England fur traders I started comparing their surnames with ancestors in our family tree, and lo and behold I found in an online document titled, “John Pynchon, New England Fur Trade 1652-76,” a Joseph Parsons, fur trader and merchant from Massachusetts, and in our family tree I found an Elizabeth Parsons (1716-1800) who was the wife of Joseph Allen our 2nd cousin 9x removed. 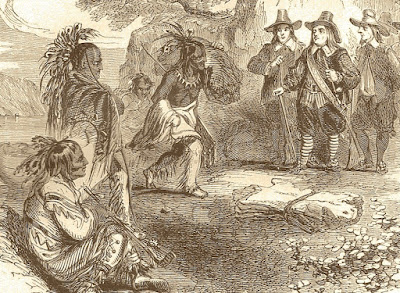 He is the paternal grandfather of wife of 2nd cousin 9x removed — I know it’s a reach, but he is a relative.

1642: In 1642 he was one of the founders of the colony at Northampton, and one of the first purchasers of Indian lands there in 1645.[9] He was a fur trader[9] and bought the sole right to barter and traffic in furs in the Connecticut Valley for an annual fee of £12. He accumulated a large estate. [10]

1655: About 1655, he purchased of William Pynchon, for the sum of twelve pounds per year a monopoly of the Connecticut River beaver or fur trade, in which he was successfully engaged.

MORE: From: Cornet Joseph Parsons One of the Founders of Springfield and Northampton, Pages 93 and 94.
SEE: https://archive.org/details/cornetjosephpar00parsgoog

Posted by Drifting Cowboy at 10:17 AM