A Cowboy's Answer To The Eternal Question 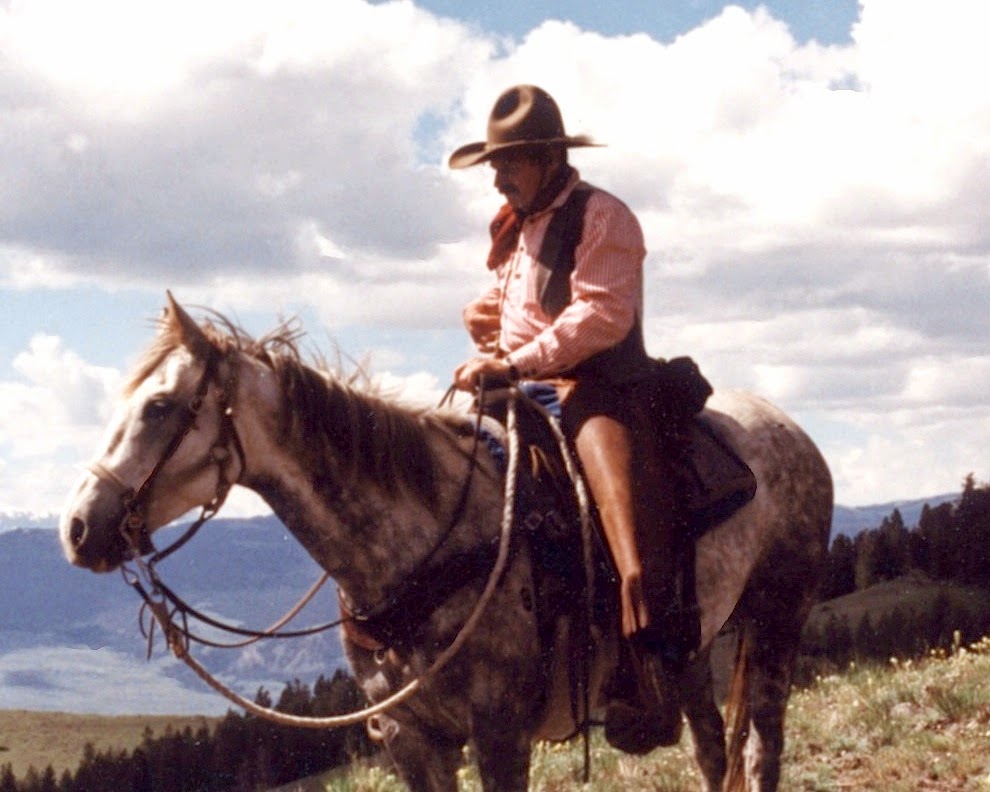 When I was a kid we didn't go to church like most other folks.

Dad had been raised by a Christian Science family who according to him -- did too much reading' when they should've called a doctor.  Consequently, his dad died from a heart attack during one of those readings, and Dad gave up on God.  From that time forward Dad claimed he was an atheist, and didn't weaken even when he was dying.

Mom, on the other hand was raised by a Seventh Day Adventist family, but had to keep her thoughts about religion to herself when Dad was around.  When Dad wasn't around I got a pretty strong dose of God'll punish you if you are bad.

Later, cause Mom was from Montana, I took an interest in the great Western artist and cowboy philosopher Charles Marion Russell.  From an early age I read everything I could written by or about ol' Charlie.  In time my ideas about religion pretty much aligned with the way Charlie saw things.

From the titles of some of his art (like the painting above) and a few of his quotes in books I know Charlie did believe in God.  I know he felt most preachers were trying to do good, and he even jested by referring' to 'em as Sky Pilots.  Still, he didn't see the need to attend church and avoided sky pilots whenever possible.

I also know he greatly admired Montana's plains Indians about whom he wrote, "their God was the sun, their church all out doors, their only book was nature and they knew all its pages."

I don't know if Charlie ever became acquainted with the cowboy poet Badger Clark who penned "A Cowboy's Prayer," but I think they both shared the same idea about God who Charlie referred to as "the Old Man upstairs."


Oh, Lord, I've never lived where churches grow.
I love creation better as it stood
That day you finished it so long ago.
And looked upon your work and called it good.
I know that others might find You in the light
That's sifted down through tinted window panes,
And yet I seem to feel You near tonight.

Let me be easy on the man that's down;
Let me be square and generous with all.
I'm careless sometimes, Lord, when I'm in town,
But never let them say I'm mean or small!
Make me as big and open as the plains,
As honest as the hoss between my knees,
Clean as the wind that blows behind the rains,
Free as the hawk that circles down the breeze!

I thank you, Lord, that I am placed so well,
That you made my freedom so complete;
That I'm no slave to whistle, clock, or bell,
Nor weak-eyed prisoner of wall and street.
Just let me live my life as I've begun
And give me work that is open to the sky;
Make me a pardner of the wind and sun,
And I won't ask a life that's soft or high.

Forgive me, Lord, if sometimes I forget.
You know about the reasons that are hid.
You understand the things that gall and fret;
You know me better than my mother did.
Just keep an eye on all that's done and said
And right me, sometimes, when I turn aside,
And guide me on the long, dim trail ahead
That stretches upward toward the Great Divide.

One of my favorite Russell quotes gives more insight to his views on religion is, “You can see what man made from the seat of an automobile, but the best way to see what God made is from the back of a horse.”

I agree, and I've found the answer to the Eternal Question while sittin' a horse on top of a mountain -- thanks to Charlie Russell and Badger Clark.

Posted by Drifting Cowboy at 4:18 PM