Jean Mignault dit Chatillon (my 9th great-grandfather) was a pioneer of New France. Jean Mignault was a native of Chatillon, near Paris, France.

At Larochelle, France on 1 Apr 1643, Jean Mignault enlisted as a soldier for the nobleman, Antoine Cheffault, sieur de Reygnardière, one of the directors of the Campagnie General de la Nouvelle France (Company of One Hundred Associates of New France). Jean received 33 livres and five sous as an advance on his wages which was to be 60 livres per year for the three year contract.

The ships La Madeleine d’Olonne and La Marie de Dieppe departed Larochelle on 27 Apr 1644, Jean was aboard one of them.

Nothing is recorded about him following the first 3 years after his arrival in Québec.

On May 4th 1647, he is mentioned in the "Journal des Jésuites" (Journal of the Jesuits). Here he left Sillery, as the leader of some French men and a group of Hurons, to fight the Iroquois near Ville Marie (Montreal).

On 11 Jan 1648, Governor Montmagny sent Jean Mignault to the "Huron's Country" (in french, le pays des Hurons) to invite them to the fur trade.

He was headed for Trois-Rivières, with 7 Hurons, preparing for his departure to the Huron Indians country. Before departing he left a chest with its key in trust with the Jesuits. He also transported another box to Denis Duquet (my 8th great-grandfather), husband of Catherine Gauthier, residents of Quebec since 1637.

Also, prior to leaving, Jean had his arquebus (gun) repaired at a cost of seven livres and ten sols by the blacksmith Jean Bonnart dit Lafortune. 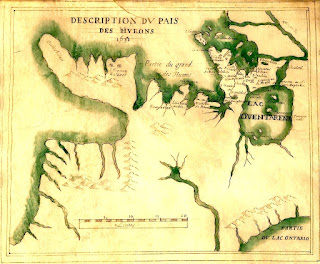 Jean along with two Christian Indians began a journey to the land of the Hurons.

Another passage in the "Journal des Jésuites" adds, "Jean Mignault went on ahead to bring the words of the Governor to the Hurons, in order to let them know the state of affairs down here, with the order to do and say only what the Father Superior of the Hurons ordered him."

In order to reach the mission of Sainte Marie among the Hurons, the paddlers had to cross more than 300 leagues, passing up the Outaouais River, across many portages, down the French River to Georgian Bay to present day Midland, Ontario. The trek would take about a month.


Late in the year 1648, Jean commanded a group of six Frenchmen along with Algonquins and Hurons to hunt down the Iroquois.

In 1657, Jean his wife lived at Beauport and admitted to owing 82 livres to Michel Moreau for merchandise received (was the money used to purchase trade goods for a fur trade adventure?).

Through the Journal of the Jesuits, we learn that on 27 Oct 1661, the Mignault house burned down.

The 1666 census shows Jean listed as a habitant and tailor living at Beauport with his wife, their six children and a domestic servant and weaver, Paul Foucault.

The 1667 census adds that Jean worked 35 arpents of land in the fief of Zacharie Cloutier, his father-in-law, and that he owned a homestead where there were 16 arpents of cleared land but no one residing there.

Jean Mignault next obtained a concession of four arpents at the Grand Anse, in the seigneurie of La Pocatiere. After a short stay, Jean relinquished this land and settled again at Riviere Ouelle where he died and where in 1681, Louise Cloutier was mentioned with three of her children as owner of three head of cattle and two arpents of cultivated land.