Was granddad descended from William the Conqueror? 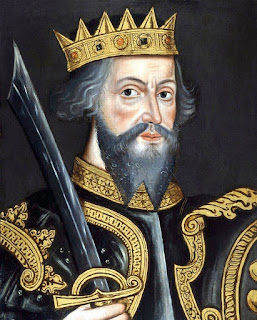 The answer is a resounding maybe!

In my opinion all family history gets a bit murky once you are beyond the earliest census records (United States 1790 and England 1841) and parish church records (about 1538 in England, and as far back as 1303 in France).

At some point you have to accept accounts in "history books" written by someone who may have had a bias slant on the stories outcome.

It has been claimed every English monarch who followed William, including Queen Elizabeth II, is considered a descendant of the Norman-born king.

More importantly, many genealogists believe that approximately 25 percent of England's population today is also distantly related to him, as are countless Americans with British ancestry.

All that said, it's fun to consider we might actually be a distant relative of William the Conqueror.

One of the more interesting facts about William the Conqueror is that he spoke no English when he ascended the throne.  Like most nobles of his time, he was illiterate.

Thanks to the Norman invasion, French was spoken in England’s courts for centuries and completely transformed the English language, infusing it with new words.

1066 The Battle of Hastings
(excerpts from Wikipedia)

In 1066, England’s childless king, Edward the Confessor, died leaving multiple claimants from across Europe vying to succeed him on the throne.

It was thought that Edward, whose mother was from Normandy, had years earlier promised the throne to his first cousin once removed, William, the Duke of Normandy.

However before he drew his final breath on January 5, 1066, it was claimed that Edward made a deathbed conversion and specified his brother-in-law Harold Godwinson, the Earl of Wessex, was to be his successor.

Harold was crowned king shortly after Edward's death, but faced invasions by William of Normandie, his own brother Tostig and the Norwegian King Harald Hardrada (Harold III of Norway).

The deaths of Tostig and Hardrada at Stamford Bridge left William as Harold's only serious opponent. While Harold and his forces were recovering, William landed his invasion forces in the south of England at Pevensey on 28 September 1066 and established a beachhead for his conquest of the kingdom. Harold was forced to march south swiftly, gathering forces as he went.

The English army (7,000 strong) was composed almost entirely of infantry and had few archers, whereas only about half of William's invading force (10,000 strong) was infantry, the rest split equally between cavalry and archers.

Harold appears to have tried to surprise William, but scouts found his army and reported its arrival to William, who marched from Hastings to the battlefield to confront Harold.

The battle lasted from about 9 am to dusk. Early efforts of the invaders to break the English battle lines had little effect; therefore, the Normans adopted the tactic of pretending to flee in panic and then turning on their pursuers. ,

Harold's death, probably near the end of the battle, led to the retreat and defeat of most of his army.

William was crowned as king on Christmas Day 1066.

Our Lineage from William the Conqueror

The following lineage was pieced together with the help of ancestry (dot) com records supplied by many hundreds of researchers:

The Battle of 1066 as seen in "The Animated Bayeux Tapestry."

The Bayeux Tapestry is an embroidered cloth nearly 230 feet long and 20 inches tall, which depicts the events leading up to the Norman conquest of England concerning William, Duke of Normandy, and Harold, Earl of Wessex, later King of England, and culminating in the Battle of Hastings.

A well done animated account of the Bayeux Tapestry and the history of the Battle of Hastings can be seen here:

The Animated Bayeux Tapestry was created as a student project while at Goldsmiths College. Just as the historic original embroidery does, the animation depicts the lead up to to the Norman Invasion of Britain in 1066. Starts about halfway through the original work at the appearance of Halley's Comet and concludes at the Battle of Hastings. Marc Sylvan redid the soundtrack to include original music and sound effects.