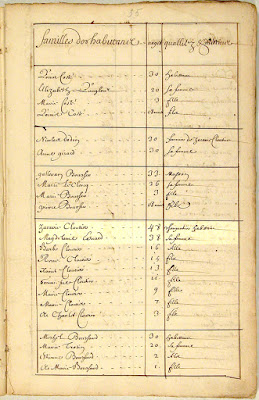 Zacharie II was baptisted on August 16, 1617 at L'Eglis de Saint-Jean in Mortagne. He learned the carpenter trade of his father and signed a contract with Robert Giffard at the same time as his father did when he was not quite 17 years old. He arrived 1634 in Quebec, Canada.

Zacharie II traveled back and forth [from Quebec to France] a few times working as a clerk for the "Company of the Hundred Associates" to engage new colonists and for the Sieur de Beaupre. He is considered the traveller of the family.

He signed a marriage contract before Notary Teuleron in La Rochelle on March 29, 1648 during a stay in France. He married Madeleine Emard at Saint-Barthelemi Church in LaRochelle on April 4, 1648.

The 1666 census of New France was the first census conducted in Canada (and indeed in North America). It was organized by Jean Talon, the first Intendant of New France, between 1665 and 1666.

Talon and the French Minister of the Marine Jean-Baptiste Colbert had brought the colony of New France under direct royal control in 1663, and Colbert wished to make it the centre of the French colonial empire. To do this he needed to know the state of the population, so that the economic and industrial basis of the colony could be expanded.

Jean Talon conducted the census largely by himself, traveling door-to-door among the settlements of New France. He did not include Native American inhabitants of the colony, or the religious orders such as the Jesuits or Recollets.

According to Talon's census there were 3,215 people in New France, and 538 separate families.  The census showed a difference in the number of men at 2,034 versus 1,181 women.  Children and those who were unmarried were grouped together; there were 2,154 of these, while only 1,019 people were married (42 were widowed).  A total of 625 people lived in Montreal, the largest settlement; 547 people lived in Quebec; and 455 lived in Trois-Rivières.  The largest single age group, 21- to 30-year-olds, numbered 842.  763 people were professionals of some kind, and 401 of these were servants, while 16 were listed as "gentlemen of means".

Posted by Drifting Cowboy at 2:06 PM