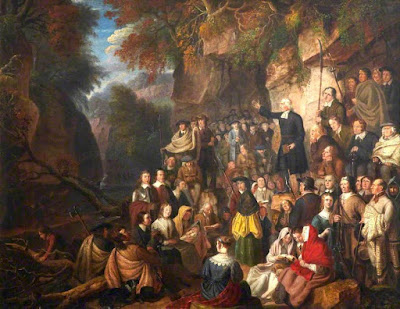 SCOTTISH COVENANTERS WERE MEMBERS OF A 17TH-CENTURY SCOTTISH RELIGIOUS AND POLITICAL MOVEMENT, who supported a Presbyterian Church of Scotland, and the primacy of its leaders in religious affairs. The name derived from Covenant, a biblical term for a bond or agreement with God.

The origins of the movement lay in disputes with King James VI & I, and his son Charles I of England over church structure and doctrine. In 1638, thousands of Scots signed the National Covenant, pledging to resist changes imposed by Charles on the kirk (church); following victory in the 1639 and 1640 Bishops' Wars, the Covenanters took control of Scotland.

The 1643 Solemn League and Covenant brought them into the First English Civil War on the side of Parliament, but they supported Charles in the 1648 Second English Civil War. After his execution in 1649, the Covenanter government agreed to restore his son Charles II to the English throne; defeat in the 1651 Third English Civil War led to Scotland's incorporation into the Commonwealth of England.

AFTER THE 1660 RESTORATION, THE COVENANTERS LOST CONTROL OF THE KIRK AND BECAME A PERSECUTED MINORITY, LEADING TO SEVERAL ARMED REBELLIONS AND A PERIOD FROM 1679 TO 1688 KNOWN AS "THE KILLING TIME".

Following the 1688 Glorious Revolution in Scotland, the Church of Scotland was re-established as a wholly Presbyterian structure and most Covenanters readmitted. This marked the end of their existence as a significant movement, although dissident minorities persisted in Scotland, Ireland, and North America.

JAMES URQUHART -- OUR 9TH GREAT-GRANDFATHER -- WAS A WELL KNOWN COVENANTER

The first minister of the new parish of Kinloss was called in 1657, but (in these unsettled times) was not ordained until 1659.

His name was James Urquhart and his stipend was fixed at £20 a year and “4 chalders of beer”. James Urquhart was a well known Covenanter, who stoutly resisted the reintroduction of Episcopacy, and in 1663 he was deposed for “refusing to submit to the new Government in Church and State.”

Undaunted, James Urquhart continued his ministry, holding conventicles in the fields, and for some years courageously defied attempts on the part of the Earl of Moray to silence him. 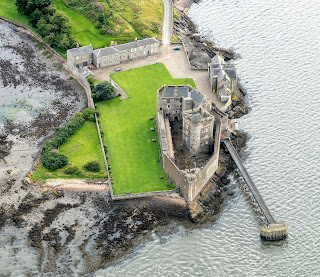 Eventually, however, he was seized, condemned by the Privy Council to be banished, and was CONFINED IN 1685 IN BLACKNESS CASTLE where so many noted Covenanters were imprisoned for their faith.

In 1690, on the restoration of Presbyterianism, he was restored to his charge.

RELIGIOUS FREEDOM IN THE AMERICAN COLONIES

John Urquhart of Newhall (1658-1731), our 8th great-grandfather, and a Scottish immigrant to the Colonies, was the son of James Urquhart Minister, Covenanter in Moray and Ross.

ON THE OTHER SIDE OF THE COIN...

Boyd was the parson of Eaglesham, and was preferred to the see (diocese) of Argyll, as their Bishop, in the year 1613. He was recorded as "a good man, and did much good in his diocese, where he always resided.

He married Elizabeth Conyngham, daughter of Adam, of Auchenharvie [Fasti vol VIII, p. 332]. They had six sons and one daughter.

Boyd died on 22 December 1636. He is interred in the graveyard of the High Kirk, Dunoon, Scotland.

John Guthrie (died 28 August 1649) was a Scottish prelate active in the first half of the 17th century. The son of the goldsmith Patrick Guthrie and Margaret née Rait, in 1597 he completed an MA at the University of St Andrews, becoming a Reader at the church of Arbroath in the same year. Two years later, on 27 August 1599, he became minister of Kinnell parish church in Angus (Presbytery of Arbroath). In the following years he was translated to various churches. In 1603, he became minister of Arbirlot parish, Angus. In 1617, he became minister in the city of Perth, before, on 15 June 1621, becoming minister of the parish of St Giles in Edinburgh.

Guthrie used his appointments as a platform for involvement in the national church. As minister of Arbirlot, he was one of the commissioners of the Presbytery of Arbroath at the Glasgow assembly of 1610. Later in that year, he got elected as clerk of the synod of St Andrews. He was a member and commissioner of the Perth assembly in 1618. In this period he established himself as an ardent supporter of the crown and its episcopalian policies. It was this that brought him the prestigious and important charge of St Giles in 1621. It was no surprise that, only two years later, he rose to episcopal rank, obtaining crown nomination to the vacant diocese of Moray on 21 July 1623. He was provided to the see on 16 August of the same year, and received consecration in October.

As Bishop of Moray, Guthrie remained a staunch royalist, an active anti-Catholic and keen promoter of ecclesiastical discipline. He took a large role in the Scottish coronation of King Charles I in 1633. Bishop Guthrie supported the King's plans to bring the Scottish church in line with the Church of England, authorising all ministers in Moray to obtain and use the new Scottish Book of Common Prayer. Bishop Guthrie was, however, out of touch with general religious sentiment in Scotland, and the Glasgow assembly of Scottish churchmen deposed him from his bishopric on 11 December 1638. Guthrie refused to accept this deposition and refused to recognise the legality of the National Covenant. He preached against it into the Spring of 1639 and on 11 July 1639 he was excommunicated by the Scottish church. He attempted to hold out in Spynie Palace. On 16 July 1640, Major-General Robert Monro of Foulis captured the palace. Guthrie was sent to Edinburgh and imprisoned in the city's Tolbooth.

He was later released, and retired to his estate, purchased in 1636, at Guthrie, Angus. John died at Guthrie on 28 August 1649 and was buried at the Guthrie Collegiate Aisle, the local parish church. He had married one Nichola Wood, by whom he had three sons (John, Patrick, and Andrew) and three daughters (Bethia, Nicolas, and Lucretia). His oldest son John (d. 1643) followed his father into the ministry, while his youngest son Andrew fought as a royalist during the English Civil War, being captured at the Battle of Philiphaugh (1645) and executed soon after.

Posted by Drifting Cowboy at 9:25 AM