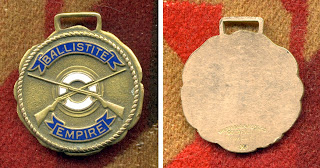 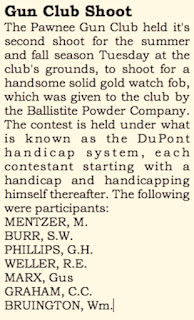 Around 1907 - 1910 -- many gun clubs offered 'solid gold' watch fobs as a trophy for their trap and skeet shooting events.  The article above was published August 18, 1910, in a Pawnee, Oklahoma Newspaper.

One new smokeless powder -- known as Ballistite -- was a propellant made from two high explosives, nitrocellulose and nitroglycerine, and was developed and patented by Alfred Nobel in 1887.  The Du Pont Company did extensive research of smokeless powders for many years before selling it to the public because nitroglycerine was so unstable.

As early as the Napoleonic Wars (1803-1815) military leaders had complained that unless there was a strong wind, after a few shots, soldiers using black powder ammunition would have their field of vision obscured by clouds of thick gray smoke, so smokeless gunpowder was a huge asset to both the military and sportsman alike.

I can also tell you -- from personal experience -- black-powder will foul revolvers after as few as a dozen shots, so new cleaner burning smokeless gunpowder was a major improvement. 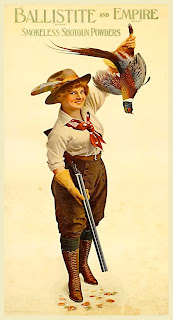 During the early 1900s, Du Pont promoted two new smokeless gunpowders used for shotguns:  Ballistite which was a dense, hard grain, progressive burning powder, stated to be reliable under all conditions -- and -- Empire which was a bulk, soft grain powder, and a favorite with trapshooters. 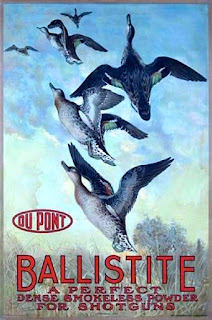 Posted by Drifting Cowboy at 10:39 AM