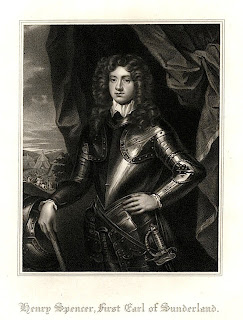 Did you happen to watch the genealogy TV series "Who Do you Think You Are?" on August 27, 2013?  I was amazed to learn supermodel Cindy Crawford is descended from Charlemagne King of France (742 AD - 814 AD)

I have been studying my family history for over forty years and I know that everyone has two parents, four grandparents, eight great-grandparents, sixteen great-great-grandparents and so on. I've learned that as you move backwards, each generation doubles the number of ancestors from the previous generation.  So, when you go back twenty or thirty generations the numbers are incredible:

This morning I decided to research one of my earliest ancestors on ancestry.com.  I was amazed to see what has turned up since the last time I looked him up a few years back.

He is Henry Spencer, born about 1392 in Badby, Northamptonshire, England, son of Thomas Spencer and Joan, daughter of Richard Pollock, of Kent, lived here.  Henry Spencer of Badby, Esquire, held certain lands and was lessee of the demesne and tithes of Badby under the Abbey of Evesham in the reign of Henry VI., and also in the reign of Edward IV, from 1451 to 1477.  The Spencer Family removed to Everdon.  The death of William Spencer of Badby and Everdon on August 17, 1576, is noted in Baker's History.  Henry died in 1476

My lineage back to Henry is as follows:

When you get back 20 generations -- as I have with Henry Spencer (1392 - 1477) -- you are likely to find many famous people who are also direct descendants of that ancestor.

Studying family history can be an amazing trip, and is a great way to renew your knowledge of world history.

Happy hunting.
Posted by Drifting Cowboy at 11:09 AM