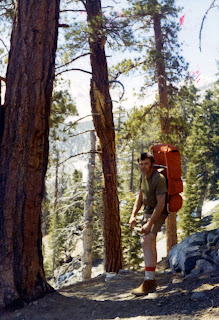 Will Rogers once said, "Good judgment comes from experience, and a lotta that comes from bad judgment."  That quote sure reminds me of my earliest attempts at backpacking.

My first hike-in pack trip was with my folks about 1956.  Dad drove to the end of a really rough dirt road, parked the car, and unloaded our gear.  We were at the Mineral King ranger station, and were headed for a place called Eagle Lake.  I don't remember much about our gear.  I think we had some WWII wood and canvas pack frames, heavy kapok filled sleeping bags, a couple of Boy Scout canteens, and lots of velveeta cheese and hot dogs.

We weren't very savvy hikers to say the least.  Mom wore the only boots she owned -- a pair of cowboy boots.  Before that trip was over she had some awful blisters.  In fact, the only thing I recall about the trip was worrying about mom.

A couple of years later dad decided we ought to try packin' in again.  This time he picked early June when it wouldn't be too hot, and we headed to a trailhead at Convict Lake.  He had a forest service map that showed Lake Genevieve a short ten miles away.  We had the same gear we had used at Mineral King.  This time mom wisely opted out, and stayed home.

Our hike started out pretty easy while we hiked the level trail around the perimeter of Convict Lake, but as soon as we started gaining elevation we encountered a lot of deep snow.  Dad was concerned about snow bridges over a creek we had been following, so he suggested we tie a length of rope to our belts.

It was a real struggle making the climb to the lake because we lost all sign of a trail in the snow, and we ended up crawling the last couple of steep slopes on our hands and knees.  When we finally arrived at the lake we discovered it was completely covered with ice except for a small area at the inlet and outlet.  We couldn't find any dry firewood, and ended up hacking a few splinters off a dead cedar stump.  That was the longest, coldest night I ever spent outdoors.

The next morning I fished what little open water there was, but didn't have any luck.  We pulled out around noon, and dad literally raced down the mountain.  He even discarded his pack and kapok bag, so he could walk a little faster.  That was his last wilderness journey on foot.

Between 1962 and 1965, I served as an airborne special forces soldier where I gained a multitude of outdoor skills.  By the late 1960s I was thrilled to discover that backpacking was gaining popularity and plenty of manufactures were offering new and innovative gear for hiking enthusiasts. 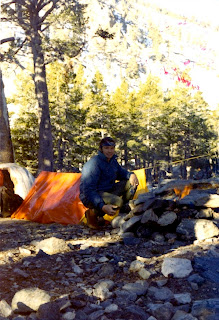 I didn't have much money those days, but I could always scratch up a little cash for gasoline, and make weekends drives to different High Sierra destinations to try a little hiking and fishing.  Little by little I gathered some decent backpacking gear.  We had a couple of Kelty backpacks, some nice lightweight down sleeping bags, an Optimus backpacking stove, and a set of Sigg nesting pots. 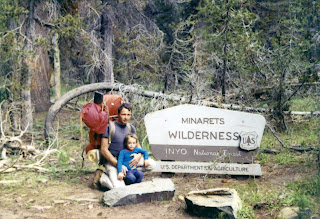 I introduced each of my children to backpacking.  When they were little they each had their own little pack -- it only contained their down jacket -- but it made them feel like they were a big part of the adventure. 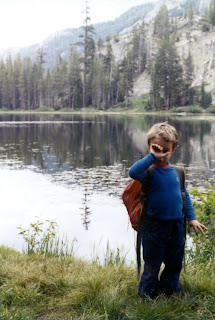 In time my quests for adventure changed from backpacking to canoeing and horseback trips, but I will always cherish those early youthful hiking adventures. 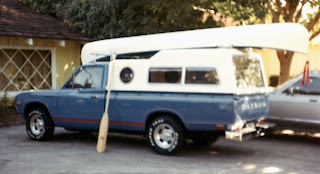 My eldest grandson -- age 19 -- just advised me that he wants to start backpacking.  I will encourage him as much as possible.  I will even offer a little advice that might save him some money.

Specialty adventure stores are a dangerous place, and they can separate you from your money in a heartbeat.  Over a bunch of years I've acquired dozens of packs, sleeping bags, camp stoves, and a plethora of miscellaneous gear only to replace it a short time later with something better.

So, here's my advice to my grandson.  Go visit REI, Sports Chalet and Adventure 16.  Ask all the questions you can, but keep your money in your pocket. 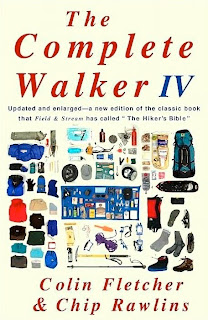 Study the online ads for Campmor, LL Bean, Cabelas and Sportsmans Guide.  Make a list of the minimum things you need.  Read the latest edition of Colin Fletcher's "The Complete Walker IV" (my 1968 edition served me well).

Then go shopping on craigslist

People -- like me -- buy good gear only to decide they need something better.  If you are patient you can get everything you want for a fraction of what it costs new in a retail store. 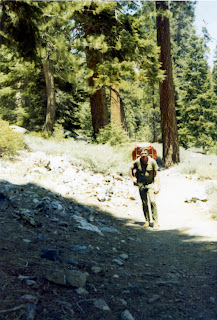 As a young camper I started out happy to have a $5 plastic tube tent to keep me warm and dry.  Have you looked at today's prices for an ultralight backpacker's tent?  If you're young and inspired you can surely deal with a few bugs if it'll save you a couple hundred dollars.

Posted by Drifting Cowboy at 10:37 PM