The colorful beads and silver pendants (above) are representative of the trade goods bartered between French fur traders and Native Americans throughout New France (Canada) in the 17th and 18th centuries.

In an effort to control the fur trade the governors of New France only licensed a few French traders, and expected the Indians to bring their furs to Montreal where the government could keep an eye on them. 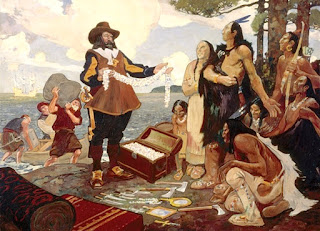 But, in short order hundreds of young, enterprising Frenchmen known as voyageurs ("travelers" in French) paddled canoes up the St. Lawrence and Ottawa rivers to rendezvous with Indian trappers to obtain their furs.

They pushed into the remote wilds of Canada, where they paddled their canoes as many as 16 hours a day while carrying two packs weighing 90 pounds (40 kilograms) each across portages. They learned the Indians' language and customs and gained their friendship with gifts like the colorful beads and trade silver pendants above.

The couriers de bois would often spend a year or two living and trapping with the Indians.

They learned to live, hunt, and dress like the Indians. Sometimes they married Indian women and settled down with their tribes. They learned to survive the freezing winters. Many they did not see another European for several years.

A major source of european glass beads used in the fur trade was Venice, Italy. A guild of Venetian glass makers existed in 1224 A. D..

The word “bead” is derived from the old English word “bedu” meaning prayer. The aristocrats of the glass beads were the Chevron or Rosetta beads. 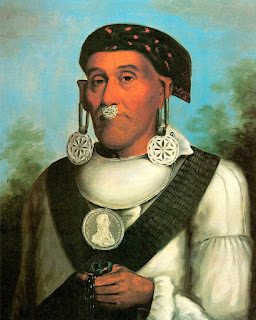 Silver made to trade with the Indians was an essential part of every well-dressed warrior’s outfit. During the 18th century most prominent Indians owned a small fortune in wearable art, including: pendants, armbands, bracelets, earrings, nose decorations, circular “moon” gorgets, and rows of pierced brooches sewn onto their clothing.

For more about my fur trade heritage see:

Posted by Drifting Cowboy at 4:45 PM