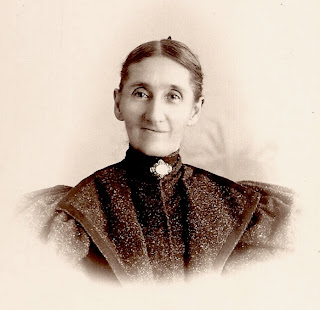 For more than 15 years I have been researching the French Canadian ancestry of Lucy Pinsonneault.  The difficultly of learning about her family began with the fact that her father and mother, both born in Canada, were illiterate and probably spoke little or no English when they first emigrated to the United States about 1830.

We know Gabriel and Maria were still in Canada in 1827 when a son Francis was born there, but they had emigrated to the United States and were living in Vermont by 1832 when their daughter Justine was born. 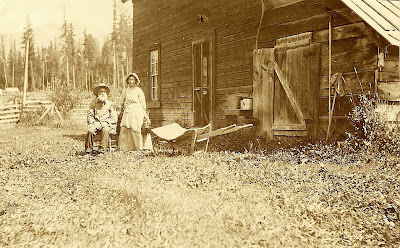 The photo above was taken about 1910 at the Creston, Montana homestead of John and Lucy Brown.

Here's good place to comment on evidence given for a death certificate.  The person the information pertains to is dead, so the supplied data comes from the often dim memory of a child or spouse.  Worse yet, someone else is writing what they think they are hearing, and of course nobody is checking the spelling at the time of writing.

In her family history notes, Lydia (Brown) Bailey, Lucy's grand daughter, listed Lucy Passino Brown as the daughter of  Gilbert Passino, born in France about 1815, and Mary Armstrong, born about 1817 in Canada.

Pinsonneau became Passino -- Getting on the right track

Published in the Press Republican (Plattsburgh, New York) November 24, 2002,  a newspaper article written by Robin Caudell titled "French connection--From street signs to surnames: French-Canadian influence manifests itself in many distinct ways."   He describes:  "Remnants of a vibrant French Canadian past permeate the North Country.  Franco culture echoes in family surnames, names of geographical places and streets.  It is preserved in the architectural detail of private residences, commercial buildings and churches, and it’s savored in traditional recipes such as tourtiere and sliders.  'You have a sense that the culture as been fully assimilated, and there are relatively little current indications French Canadian culture existed here,' said Dr. Sylvie Beaudreau, a professor of history at Plattsburgh State."

Breakthrough -- The death of ‘Mary’ Émélie Meunier dite Lagacé
Melanie Pierce, a distant cousin, wrote to me that she learned Mary Passino was, in fact, Marie Laggesie, and she sent me a copy of Marie's death certificate, which had been hand-written in French.  To be honest I was doubtful, but I sent a copy of the certificate to a genealogist and Lagacé family researcher in Canada.  The genealogist interpreted the document and advised me the certificate clearly states that Marie Émélie Meunier dite Lagacé was the wife of Gilbert Pinsonnault, of ( États-Unis) United States.  She also confirmed that Pinsonneau was very likely changed to Passino.

Armed with that information I quickly found birth and marriage records for Gabriel and Marie Pinsonneau online at ancestry.com.

During the past two years I have traced the Pinsonneau and Lagacé families to the very beginning of Canada's history.  I found over 200 French-Canadian relatives.  Some of them were farmers and tradesmen; more than a dozen had been involved in the fur trade as either couriers de bois or voyageurs. 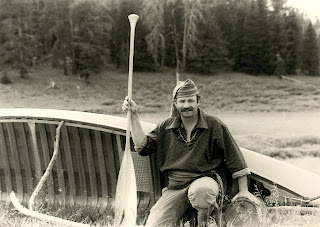 Maybe that explains my love of canoeing, and the silent places that can only be reached by paddle and portage.  Photo from a 1987 rendezvous reenactment.

If there was ever a doubt about my Pinsonneau/Pinsonneault family heritage it has been dispelled by my ancestry.com DNA tests which have yielded dozens of links to early French-Canadian ancestors including shared ancestors.

Because I've discovered several new cousins in the past few years I think it would be a good idea to establish my Pinsonneau ancestry and identify relationships found for the past 10 generations:

Pinsonneau Family Relationship to me

GENERATION 8
Lydia Corinna Brown 1891-1971 grandmother - Daughter of Abraham Lincoln Brown [Lydia was born in Iowa removed to Montana where she married Frank Bailey. They removed to Idaho, and eventually settled in California during the depression]

[Spouse Frank Jackson Bailey 1886–1968 grandfather][Frank Jackson Bailey’s ancestry can be traced back though the American Civil War, Revolutionary War and French Indian Wars to the Puritans who settled in Connecticut in the 1630s]

GENERATION 9
My mother 1914-2004 [Born in Montana, removed to Idaho and eventually settled in California during the depression] She lived to be 90 years-old.

I hope you find something useful in my blog.

Be sure to visit La Prairie Voyageurs Facebook page...
https://www.facebook.com/pg/ENGLAND1942/posts/?ref=page_internal

Posted by Drifting Cowboy at 1:28 PM