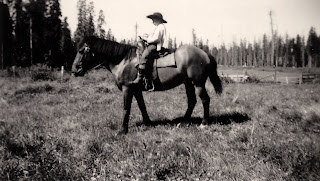 Funny how a 7-year-old can retain a great memory that lasts for a lifetime.  We were visiting my mother's aunt and uncle on their ranch near Kalispell, Montana, when I went on my first real fishing trip.
Uncle Lon said he knew of a lake that was just plumb full of trout, and not many folks went there because it would take a little work to get to it.  A few hours later we found ourselves on the edge of a mountain.  The trail was so narrow and steep, uncle Lon had to show us how to wind our horse's tails around our hands so they could pull us up the trail and keep us from falling.  In all we had five saddle horses and a pack horse.
When we finally arrived at this beautiful high altitude mountain lake, uncle Lon had a wonderful surprise.  He brought along a war surplus four-man raft.  In short order we were bobbing along on the surface of the lake, pulling in trout left and right.  And, as luck would have it the kid on his first fishing trip caught the biggest fish of the day. 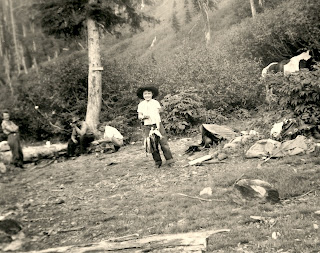 During our two-week stay with Lon and Olive, besides catching the biggest fish during an extraordinary day trip,  I learned to ride a horse and visited Glacier National Park  The memory was so strong I penned this short poem fifty years later.
Memories of Ol' Montana
I went for a visit to the family homestead about 1950.
Mom introduced me to ol’ Montana, it sure was nifty.
They had horses and cows and I met Uncle Lon there.
it's my memories of that trip that I’d like to share.
You see my Mom came from from a hearty family branch,
That made their living on a sure enough stump ranch.
They hunted elk, logged timber, an’ raised a few cows,
Had a garden too, whatever put food in their mouths.
Lon had nearly a section of land covered with Lodgepole pine,
17 acres was pasture created by removing a stump at a time.
An’ living 30 miles from Kalispell gave them room to roam.
To this very day I think of that ol’ ranch as my second home.
Uncle Lon put me on a horse when I was just seven years old
Said he was mine an’ he’d do what he was told.
The truth is he belonged to my aunt, Brownie was his name,
But he was my first horse to ride, and I loved him all the same.
I was from the city, but with me Aunt Olive knew what to do,
She gave me her wide-brimmed hat and cowboy boots too.
For the next several days ol’ Brownie an’ me grew to be pals,
We explored every inch of that pasture an’ herded some cows
I vowed I’d be a cowboy an’ move to Montana when all grown,
Now a lot years have passed but someday to Montana I’m goin’.
An’ thanks to Uncle Lon I’ve still got a little horse for a best friend.
Her name is Kasidy an’ we’re gonna ride in Montana before our end.
Posted by Drifting Cowboy at 8:23 AM