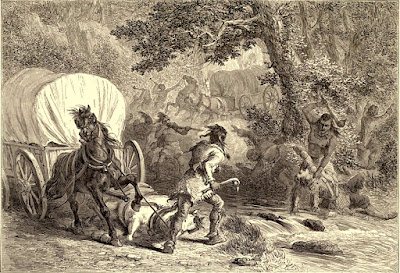 The Battle of Bloody Brook was fought on September 18, 1675 between English colonial militia from the Massachusetts Bay Colony and a band of Indians led by the Nipmuc sachem Muttawmp, during King Philip's War.

The Indians ambushed colonists escorting a train of wagons carrying the harvest from Deerfield to Hadley, and killed at least 40 militia men and 17 teamsters out of a company that included 79 militia.

The Pocumtuc tribe, allied with the Nipmuc, were aggrieved by the Deerfield colonists encroaching on their settlements.

To me it is amazing that we are alive, so many of our ancestors died in a similar tragic manner during the early years of the United States experiment.

Our 8th great-grandfather John Allen (1670–1739) was just five years old when his father was killed at Bloody Brook.