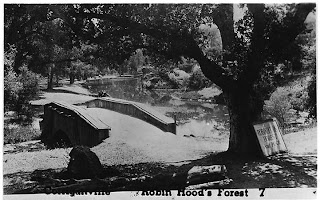 One of the neat features Corriganville had -- that most location ranches didn't -- was a lake.  Supposedly Ray Corrigan claimed it was a mile east of Silvertown, but I'd judge is was a good deal less.  Have a look at the aerial photo on my Corriganville overview page http://a-drifting-cowboy.blogspot.com/2012/07/corriganville-movie-ranch-overview.html and decide for yourself.

The man-made, concrete lined Robin Hood Lake snaked through an oak woodland, and looked more like a lazy river than a lake, never-the-less is was a popular filming feature that showed up in many dozen movies. 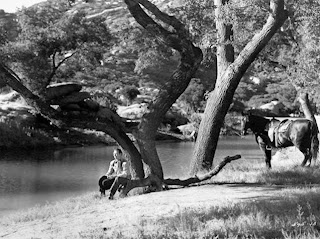 It was the perfect spot for a crooner like Eddie Dean to sing love song as he does here in Stars Over Texas (1943). 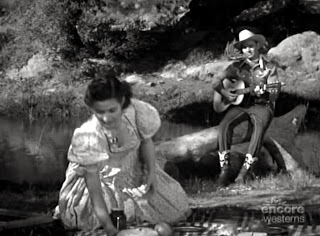 In the screenshot above from Beyond the Purple Hills (1950) Gene Autry woos a pretty gal. 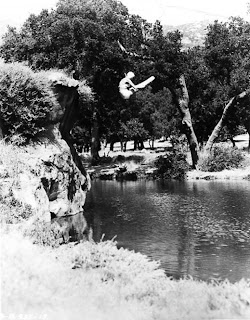 One of the most used sites at Robin Hood Lake was a 'Stunt Rock.'  It saw lots of action in movies like Jungle Jim (1948).

In the lobby card photo above Gene Autry and a bad guy take a plunge off Stunt Rock in Hills of Utah (1951). 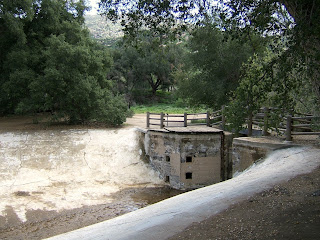 In some of the Jungle Jim films underwater scenes were filmed through observation windows in concrete bunker located at the west end of the lake -- just beyond Stunt Rock. 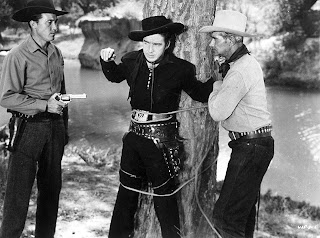 In the movie still above from Frontier Revenge (1948) Lash LaRue has been captured by bad guys.  Stunt Rock is on the far side of the lake behind Lash. 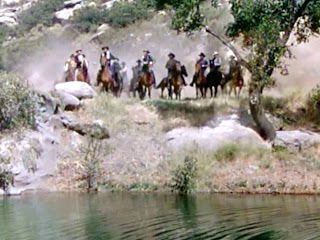 Above is a screenshot showing the north side of Robin Hood Lake in a scene from Renegades (1946).

The far east end of the lake had a chase road that crossed stone bridge that offered endless filming opportunities such as the scene above from The Robe (1953). 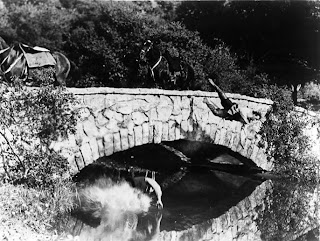 Above is a still from Lorna Doone (1951) that gives us a close up look of the bridge which came to be known as 'Susanna Pass Bridge' after a Roy Rogers film with that title. 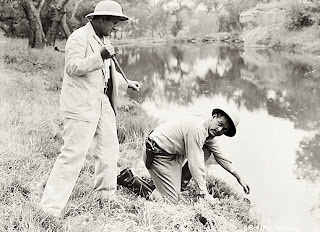 A movie still from a scene in Congo Bill (1948) with Stunt Rock in the distance (far right). 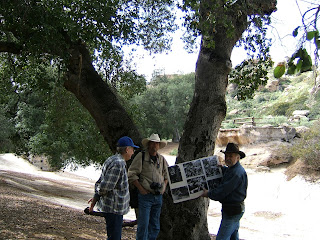 If you would like tour of Corriganville Park to learn about filming history -- contact Gregg Anderson (far right) through the Rancho Simi Recreation and Park District at (805) 584-4453.

Posted by Drifting Cowboy at 9:38 PM