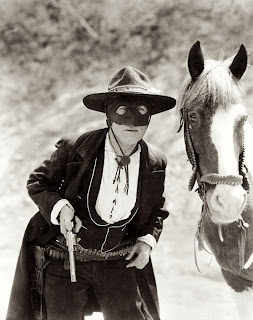 Fritz -- Bill Hart's Pinto Pony -- was acquired by William S Hart from film producer Thomas Ince.  Fritz was the first horse in the movies to be listed as a co-star with his rider.  The photo above is from a scene in The Narrow Trail (1917). 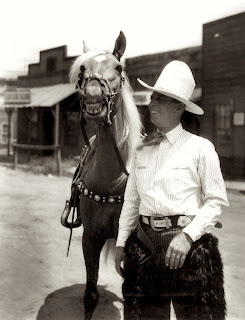 Goldie -- a palomino horse -- owned by Hoot Gibson was rumored to have died as a result of injuries sustained while making a movie.  Hoot actually rode many horses in his starring roles.  Among them were Jack Perrin's Starlight, Tom Keene's Rusty, and others identified as Midnight, Mutt and Pal. 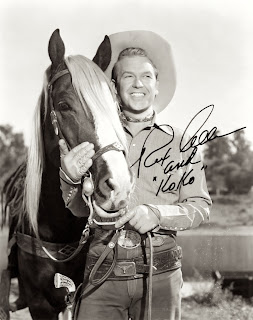 KoKo -- The Miracle Horse of the Movies -- owned by Rex Allen was a liver chestnut (or dark sorrel) color with a flaxen mane and tail.  According to my research KoKo had some Morgan heritage. 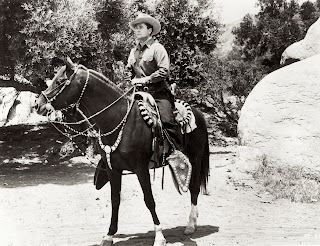 Sun Dance was one of the last horses used by Tim Holt in the movies.  Earlier horses included a palomino named Lightning, and Duke with a large star on his forehead.  In the photo above Tim is using a California style double rein outfit with a hackmore, humane bit, and mecate (horsehair) reins.  Flashy! 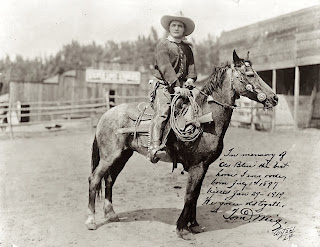 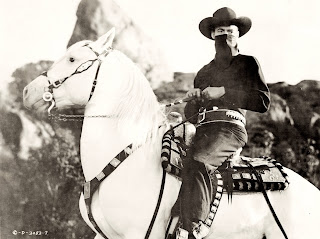 Raider -- a white Morgan gelding -- was Charles Starrett's horse when he played the part of the Durango Kid. 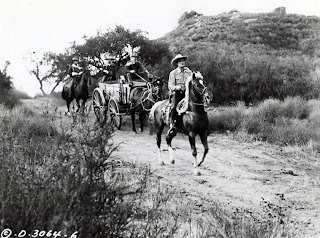 If you recall Starrett usually played a duel role, so when he wasn't the masked rider he rode a handsome chestnut named Bullet (above). 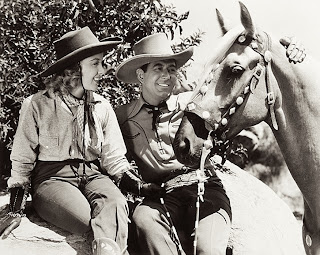 Rebel -- was a golden palomino -- owned and ridden by Johnny Mack Brown in his later films.  Another researcher offers an interesting tale that says the horse was originally named Reno, but his name was changed when Johnny played opposite a female co-star named Reno Blair at Monogram.  The gal in the photo above is Nell O'Day. 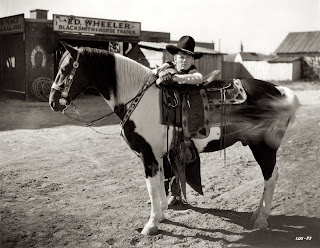 Rusty -- may have been a paint horse -- owned by Tom Keene, but truthfully I'm on shaky ground.  I couldn't find any information about the horse in the still above.  I did find two researchers using one of those old low resolution arcade cards of Keene on a rearing paint.  Both researchers claimed the horse was Rusty… maybe so.  If you know for sure let me know. 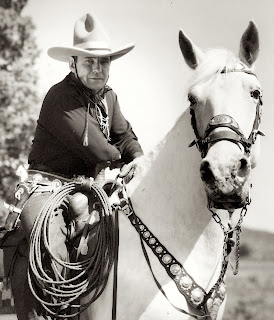 Silver -- a beautiful white horse -- occasionally got star billing as "Buck Jones' horse" in movies like The Roaring West (1935), but I was surprised to learn that was fairly rare.  Silver -- the horse -- actually made 73 films between 1922 and 1942. 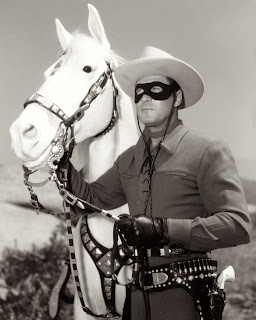 Silver -- the beautiful white horse -- ridden by Clayton Moore, as the Lone Ranger.  Well, again it seems like there are at least two Silvers.  Apparently one was actually named "White Cloud" and the other was named "Tarzen's White Banner."  It appears the horse that rears in the opening scene of the TV series was "White Cloud."

As a youngster -- for me there was only one Silver -- and I personally will ever forget those spine-tingling words, "A fiery horse with a speed of light, a cloud of dust, and a hearty ‘Hi-Yo, Silver!’. . . The Lone Ranger!"

Hold your horses… before you write to tell me I missed your favorite six-gun hero and his steed -- there'll be more coming soon.

Posted by Drifting Cowboy at 3:45 PM