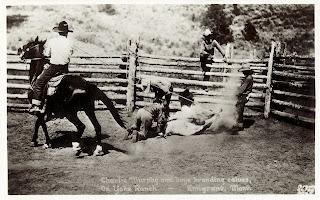 About 17 years ago -- when I was still building 'Cowboy Chic' furniture -- I briefly considered writing a book about the history of cowboy furniture.  There was plenty of source material for adirondack furniture, fantasy furniture, and even some information about more recent (1950s) designs like Wagon Wheel and Monterey furniture. 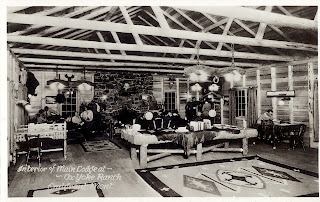 I figured there must be a few small furniture builders -- other than Thomas Molesworth -- in dude ranch country, so I started collecting dude ranch ephemera. 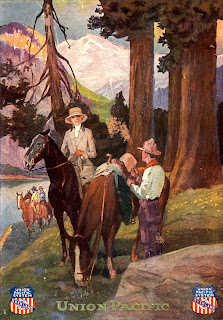 I found several old dude ranch brochures and I acquired a swell set of postcards and personal photographs from a young woman's 1941 visit to the Ox Yoke Ranch in Emigrant, Montana. 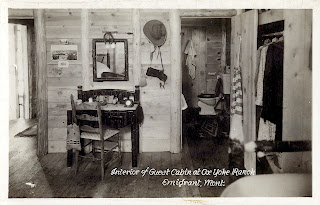 After a couple months I abandoned the book project because I was just too busy building my Lure of the Dim Trails furniture, and  -- in time -- I forgot all about the Ox Yoke photos.  To make a long story short I recently came across those old photos, so I googled 'Ox Yoke Ranch' and discovered the ranch still exists.  I contacted the owner and got permission to share some of its history... 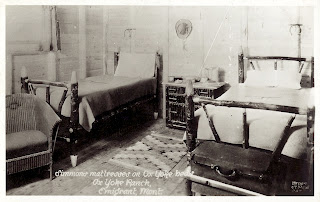 In 1863, Ohio native Nelson Story settled with his wife, Ellen, in Montana in a log house at Alder Gulch. Three years later, in 1866, he drove 1,000 head of cattle up from Ft. Worth, Texas, on the Lonesome Dove Trail to help feed starving Montana mining town residents isolated by harsh weather. He came through Paradise Valley and, beset by an early winter, he camped in a "pretty little canyon" offering protection from the elements – the site later became the Ox Yoke Ranch.

Through the early 1900s, the site served as a base camp for sheepherders and cowboys. In the late 1920s, Charles Murphy purchased the Paradise Valley site and founded Ox Yoke Ranch, a 50,000-acre working cattle ranch.

A depressed livestock market forced Murphy to consider ways to diversify the ranch and generate income. While cattle ranching was not always a lucrative profession, dude ranches were growing in popularity in the 1920s and 1930s. When the Northern Pacific Railroad came to Paradise Valley, establishing a train station in Emigrant, Murphy seized the opportunity to be among the first Western ranchers to open the wonders of the West to pleasure travelers from the East. 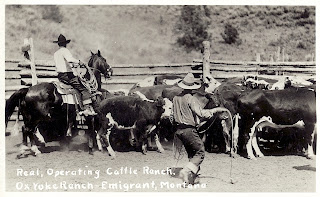 Working with Northern Pacific Railroad officials in Chicago, Murphy began construction on the Ox Yoke's main lodge. While the dining room and sitting rooms have since been renovated, and amenities have been added, much of today's historic Mountain Sky main lodge remains structurally unchanged since the 1920s. 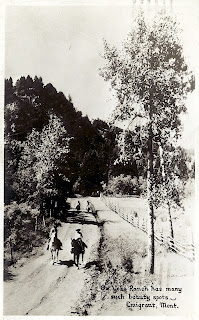 Murphy also relocated a rustic house on the property, inhabited by earlier homesteaders, the Lewis family, from the upper pasture to a new location closer to the main lodge. Murphy used the log home as his year-round residence and office for the ranch. 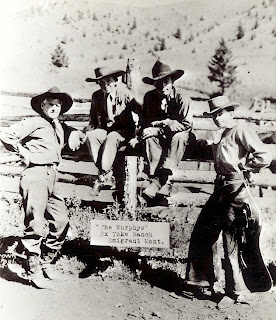 In 1929, Murphy welcomed his first guests at the railhead in Emigrant for their stay at Ox Yoke Ranch. It was not unusual to see private rail cars parked for two and three months in Emigrant throughout the summer. Guests came from Chicago, Minnesota, New York and Florida to enjoy the same spectacular riding, hiking, fishing and warm Western hospitality enjoyed by today's Mountain Sky guests. 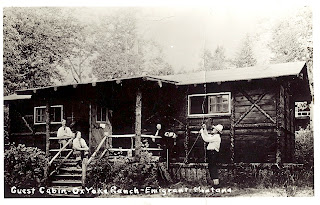 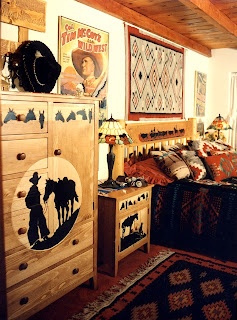 To learn more about my 'Cowboy Chic' furniture and 'Lure of the Dim Trails' use the search box at the top left of the page to search those terms.

Posted by Drifting Cowboy at 8:15 AM