Carrying a gun in backcountry is a personal choice.  I choose to carry a gun for three reasons… 1) as a means to signal searchers in the event I'm in trouble; 2) as a means for self defense; and 3) as a means for survival.  Truthfully it's unlikely that I'd ever need a gun on a horseback ride or a canoe trip, but having one within reach gives me a good deal of personal comfort.

Traditionally three gun shots indicates a need for help and lets searchers know which direction to travel.  I don't suggest wasting a lot of ammo if you aren't sure you can be heard, but if you have an idea someone is looking for you or is within earshot it's worth a try.  Just don't shoot in the air -- shooting at a tree or dirt hillside is the best choice.

People -- Defending myself has taken on more significance as I've aged.  At 70 years old I'm not equipped to fight bad guys, but I can still fire a gun if my life is in danger.

There was a time when I felt pretty safe in the backcountry, then a couple of events made me realize even bad folks populate the backcountry.  A few years back I was at a fur trade rendezvous reenactment when a group of teenagers wandered into our camp late at night.  The next day we found our cars -- parked a half mile way -- had been broken into.  Quite a few guns -- including my 357 magnum -- had been stolen along with wallets, tools and other personal items.

In 1995, when I made a solo run down the Missouri River in Montana, I carried a 12 gauge shotgun for signaling, self-defense, and survival.  about midway down the river -- miles from any inhabited location -- I heard the crack of a high powered rifle a couple hundred yards above the north shore.  A split second later I heard a bullet smash into some rocks on the south shore.  In total the shooter(s) fired a half dozen shots over my head.  I can't begin to tell you how inadequate my 12 gauge made me feel.  I reported the incident to the local sheriff in Lewiston when I got to the take-out two days later.  It seems a couple of teenagers were just having a little fun -- according to the sheriff -- who did nothing about it. 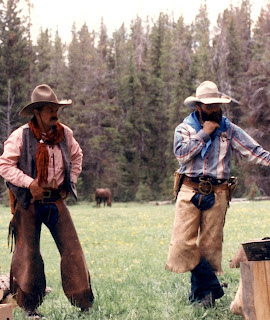 Animals -- I know plenty of outfitters that wouldn't consider entering bear country without a gun, so I've adopted my own policy of carrying bear spray backed up with a good firearm.

I've seen some ruined campsites in Minnesota's boundary waters, and I've heard enough bear stories from Wyoming outfitter friends to know bear spray isn't always the best solution for a problem bear.  Grizzly bears and wolves are on the increase in many areas of the Pacific Northwest, and recent legislation allowing guns (for self defense) in National Parks ought to be a hint of increased danger from wildlife.  Before you carry a firearm -- learn the laws governing guns in the area you plan to travel in -- and obey them.

Lots of things can happen to cause an unexpected survival situation -- injuries, earthquakes, floods, wildfires, are just a few.  Common sense and laws in many states allow the taking of game for survival.  There are no shortage of internet discussions as to which firearms are best for survival, so I'll let you find your own solution. 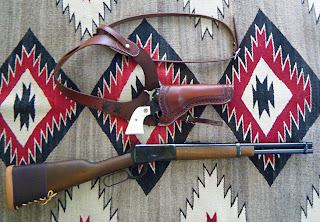 For me -- I want something that is light and easy to carry on horseback or in a canoe.  My personal choice is a two gun combination using the same ammo.  Where the law allows (not Canada for example) -- I carry a Ruger Vaquero .45 colt in a shoulder holster, and its companion Legacy Puma M-92 lever action .45 colt in a scabbard on horseback or a floating case in my canoe.  The combination gives me 15 rounds of fire power before I need to reload.

The .45 colt in 250 grain is a legitimate answer for bear problems, and the Puma will take down big game up to 100 yards away. 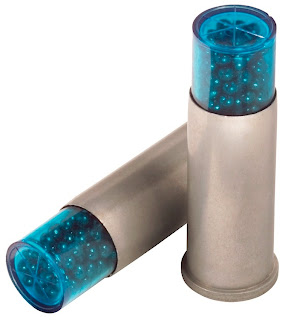 While I've never actually used them in .45 colt -- I also carry a box of #9 shot CCI Blazer Shotshells for small game and birds.  .22 shotshells were a great solution for snakes when I was growing up, so I figure the .45 colt will work just as well.

I hope I never have to use either of my guns for signaling, self-defense, or survival, and I go to the local firing range often enough to keep my eyes sharp and my guns tuned.  They are also close at hand at home :)

Posted by Drifting Cowboy at 4:38 PM