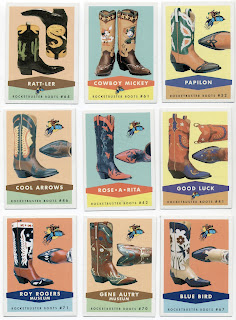 Yesterday I came across two decks of cowboy boot trading cards I've had for about 20 years.  They were used as a catalog by the Rocketbuster Boot company in the pre-internet days. 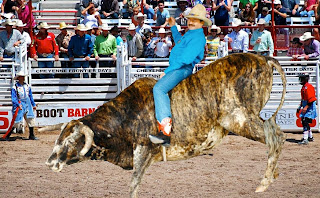 Back about 1991, I purchased a pair of flashy Rocketbuster "Ride 'em Cowboy" boots to wear to a cowboy design show.  Truthfully, I've only worn them a few times because they are just to gaudy for me, and I prefer more traditional cowboy gear.  However, finding those old cards got me to thinkin' about cowboy boots and how they came to be.  I've been trying to get my grandsons interested in horseback riding, and if they get serious I'll need to buy them some good boots before I take them out on any serious trail rides. 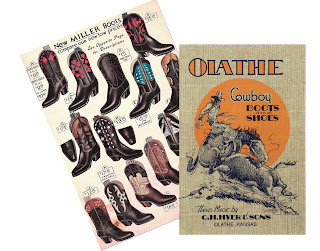 Some years back a fellow found a way to recycle old plastic chewing tobacco cans by filling them with steer manure, and neatly labeling them "cowboy boot polish."

Maybe it was the same fellow -- who after discovering his brand new -- freshly polished -- cowboy boots were dusty and dirty after a short walk across a corral -- said, "real cowboys don't polish their boots 'cause it's a waste of time."

Actually, nothing could be further from the truth.  Cowboy boots are an expensive and necessary part of everyday life, and real cowboys take good care of all leather goods including saddles, bridles, and cowboy boots which need regular cleaning and conditioning to protect them and make last.

• high 2" heels (to minimize the risk of your foot sliding forward through the stirrup.  A boot caught in the stirrup could be life threatening if you became unseated and fall, but are hung-up in the stirrup.  Your horse could panic and run causing you to be dragged to death).

• rounded or pointed toe (a bit narrowed at the toe to make it easier to insert into the stirrup).

• slick soles (allow easy insertion and removal of the foot from the stirrup when mounting and dismounting).

• high shafts (help hold the boot in place and also protect the lower leg from rubbing on the stirrup leathers, as well as fending off brush and thorns.  When dismounted, they help protect your leg and foot from rocks, brush, thorns, and rattlesnakes.  In rainy weather or at creek crossings, high tops help prevent your boot from filling with mud and water).

• traditionally no lacing (which could also can hang-up, however packer boots -- worn when you're likely to be walking a great deal -- are an exception).

Cowboys are unlikely to ruin a good pair of dress boots while working, so most own a couple of pair of everyday work boots as well as some more decorative boots to wear in town.  Early boots were cowhide leather pieced together with single rows of top stitching, but as custom boots became more available, cowboys started asking for decorative stitching, cutouts in the high tops (such as Texas stars and steer heads), and different materials such as exotic skins like alligator, snake, ostrich, lizard, eel, elk and buffalo. 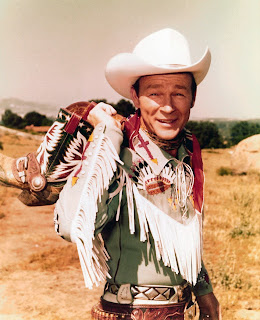 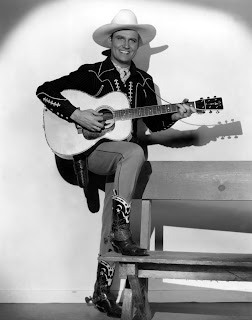 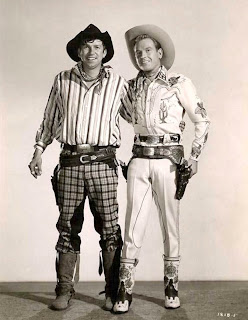 And, late comer Rex Allen with a colorful floral pattern while sidekick Slim Pickens has a more traditional pair of boots pulled on with long mule-ear straps (photo courtesy of Bruce Hickey).

Posted by Drifting Cowboy at 11:22 AM