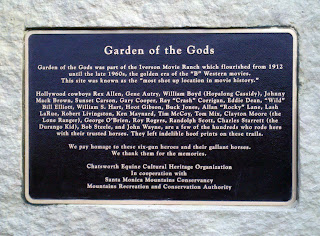 This plaque is the Chatsworth Equine Cultural Heritage Organization's way to pay homage to those six-gun heroes and their gallant horses that performed on Chatsworth's Iverson Movie Location Ranch.

Thank you for the memories. 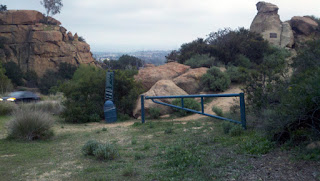 The Santa Monica Mountains Conservancy installed the plaque March 5, 2013.  The funds came from the Chatsworth Equine Cultural Heritage Organization when they dissolved December 2009. 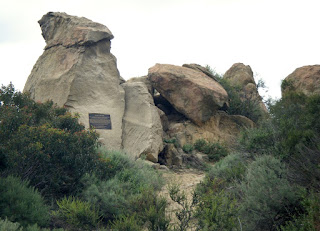 The plaque is mounted on a sandstone outcropping -- known as Hawk Rock --  just off the trail that leads to the Garden of the Gods formation. 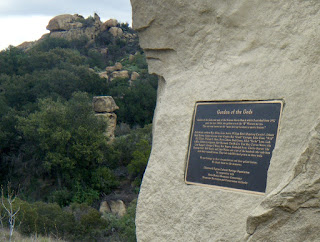 It's also located directly opposite Lone Ranger Rock which is on the east side of Redmesa Road -- about a quarter mile north of Santa Susana Pass Road -- in Chatsworth.

Homage to six-gun heroes and their gallant horses
http://a-drifting-cowboy.blogspot.com/2012/02/homage-to-six-gun-heroes-and-their.html

So what's the big deal you ask?

Just a select few better known movies lensed in the Garden of the Gods Park include:

Link to a map of the 'Rock Stars' in and around the Garden of the Gods Park:
http://a-drifting-cowboy.blogspot.com/2012/01/meanwhile-back-at-ranch-map-to-rock.html

Links to stories about the 'Rock Stars' in and around the Garden of the Gods Park:
http://a-drifting-cowboy.blogspot.com/2012/05/chatsworths-rock-stars.html

Posted by Drifting Cowboy at 12:34 PM