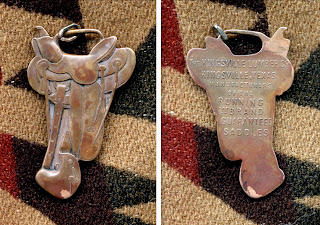 My 'Running W' Saddle pocket watch fob has a great patina, and shows little sign wear.  As you can see it has the "Running W" brand on the saddle fender.   And the reverse reads, "THE KINGSVILLE LUMBER CO. KINGSVILLE, TEXAS MANUFACTURERS OF THE RUNNING W BRAND GUARANTEED SADDLES.  My fob measures approximately 1 3/4" high by 1 1/8" wide.  Two of these rare fobs recently turned up at the same time of ebay and sold for $162.00 and $199.00 respectively.

The Kingsville 'Running W' is well known in Texas history

The Running W Saddle Shop began in 1867, when ranch owner Captain King established a small tack shop to make saddles and other equipment to be used on his already impressive King Ranch in Texas.

Captain King's assembled group of first-rate craftsmen made saddles of such exceptional quality that news of their superiority quickly spread. 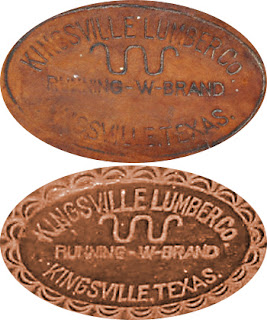 Within a few years -- following the end of the Civil War -- the King Ranch Saddle Shop was providing saddles and tack not only for the vaqueros who tended the rapidly growing herds of the Running W brand, but also for ranchers and cowboys on neighboring and distant ranches. 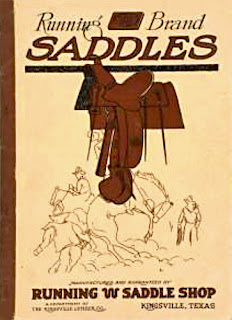 Around 1910, the Kingsville Lumber Company took over the saddle shop, and retained the 'Running W' brand.  They are still in business today, and are known as the King Ranch Saddle Shop in Kingsville, Texas.


Posted by Drifting Cowboy at 4:41 PM