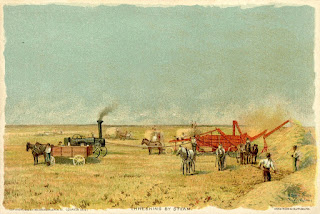 Calvin Plimpton, my 3rd great grandfather, was born 15 Feb 1815 in Geneva, New York.  His grandfather, Elijah Townsend was a blacksmith that crafted cow-bells for the early settlers. Perhaps that's where young Calvin built a knowledge base that would eventually lead him to be become and mechanist and finally a threshing machine builder. 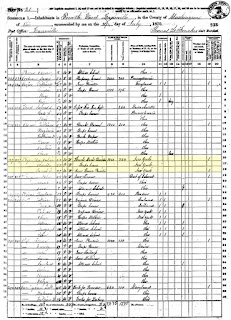 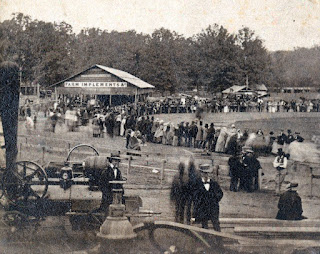 Perhaps Calvin was in the crowd at the farm implements barn (in this JQA Tresize photo) during Ohio State Fair in Zanesville, Ohio on September 21, 1859.  Calvin passed away 26 May 1874, at age 60.

Thrashing machines (early spelling), were created to mechanically separate grain -- such as wheat -- from stalks and husks.  For thousands of years before the machine was invented grain was separated by hand with flails, which required extensive back-breaking, hand labor.

Posted by Drifting Cowboy at 3:44 PM No comments:

Great Granddad Was The Village Blacksmith 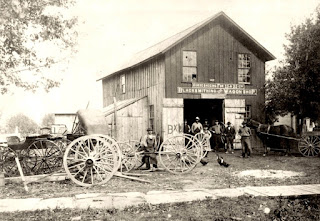 Valentine Boyd, my 2nd great grandfather,  was born in 1811 in Tennessee.  I know from census records he was a blacksmith in Union, Appanoose, Iowa by 1850, so I imagine Valentine Boyd had been given an opportunity to apprentice for a blacksmith sometime in the late 1820s after his father relocated to the farming community of Clinton, Franklin County, Ohio.

I can picture young Valentine fueling the forge fire as the work day begins, then pumping a huge bellows that fanned the forge fire, all the while watching the smithy perform his artful tasks. 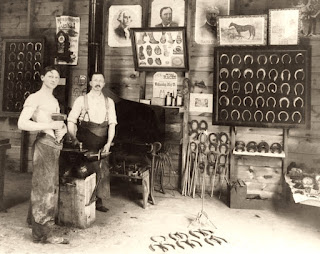 After becoming a journeyman it would be fitting for him to marry, and move on to find a place to open his own shop.  Valentine Boyd married Sarah Grooms on May 6, 1835, in Clinton, Ohio, when he was 24 years old.  Then he moved on looking for a new home.  He was in Warren, Indiana, in 1840, and finally came to Union, Iowa, in 1850. 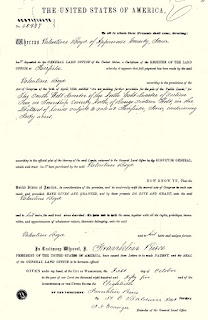 There is no record for Valentine or Elisabeth after 1870. 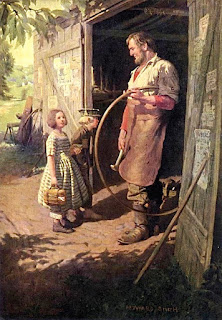 Under a spreading chestnut-tree
The village smithy stands;
The smith, a mighty man is he,
With large and sinewy hands;
And the muscles of his brawny arms
Are strong as iron bands.

His hair is crisp, and black, and long,
His face is like the tan;
His brow is wet with honest sweat,
He earns whate'er he can,
And looks the whole world in the face,
For he owes not any man.

Week in, week out, from morn till night,
You can hear his bellows blow;
You can hear him swing his heavy sledge,
With measured beat and slow,
Like a sexton ringing the village bell,
When the evening sun is low.

And children coming home from school
Look in at the open door;
They love to see the flaming forge,
And hear the bellows roar,
And catch the burning sparks that fly
Like chaff from a threshing-floor.

He goes on Sunday to the church,
And sits among his boys;
He hears the parson pray and preach,
He hears his daughter's voice,
Singing in the village choir,
And it makes his heart rejoice.

It sounds to him like her mother's voice,
Singing in Paradise!
He needs must think of her once more,
How in the grave she lies;
And with his hard, rough hand he wipes
A tear out of his eyes.

Toiling,--rejoicing,--sorrowing,
Onward through life he goes;
Each morning sees some task begin,
Each evening sees it close
Something attempted, something done,
Has earned a night's repose.

Thanks, thanks to thee, my worthy friend,
For the lesson thou hast taught!
Thus at the flaming forge of life
Our fortunes must be wrought;
Thus on its sounding anvil shaped
Each burning deed and thought.

Posted by Drifting Cowboy at 2:47 PM No comments: