Great-Grandfather, was a soldier in the Régiment de la Reine 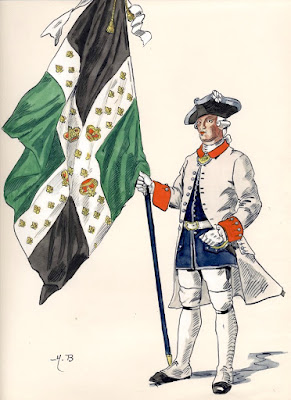 Michel Vielle, our 5th great-grandfather, was a soldier in the Régiment de la Reine, in the Compagnie Captain Guillaume de Montbrais.

His two sons Joseph and Michel became voyageurs for the North West Company in the 1790s.

The two battalions of this regiment operated on different theaters of operation for most of the Seven Years' War. The 1st Battalion remained in Europe while the 2nd was sent to Canada.

On May 3 1755, the 2nd Battalion (12 companies: Assezat, Bayard, Delmas, Desnoës, Faudoas, Hébécourt, Hébécourt, Lass, Montbrais, (Captain Guillaume de Montbrais), Montreuil, Pascalis, Peres) embarked at Rochefort for Canada under the command of Lieutenant-Colonel Jean-Georges Dejean de Roquemaure. The ship of the line Lys, transporting 4 of these companies was captured on June 8 by the Royal Navy off the coasts of Newfoundland before reaching Québec.

The 8 remaining companies of the 2nd Battalion disembarked at Québec on June 23. Soon after, they were sent to relieve Fort Saint-Frédéric (present-day Crown Point) and to put a stop to the British advance on Lake Champlain. On September 8, 2 companies of the 2nd Battalion, under Dieskau, took part in the Combat of Lake George. Along with 2 companies of Languedoc Infanterie, these 2 companies of La Reine Infanterie were the first French regulars to take part in a battle in North America during the Seven Years' War. After this battle, British provincial troops maintained their position but stopped their progression on Fort Saint-Frédéric. The regiment took its winter-quarters in Montréal.

In May 1756, the 2nd Battalion was posted at Carillon (present-day Ticonderoga) where it took part in the construction of Fort Carillon. The Marquis de Montcalm arrived at Carillon during the Summer and considered the place secure. When Montcalm left for Lake Ontario, the battalion remained at Carillon with the small force placed under the command of the Chevalier de Lévis to defend the place. On November 2, the battalion left Carillon to reach its winters-quarters upstream from Québec on the left bank of the Saint-Laurent River at Sainte-Anne-de-Beaupré and Beauport.

By July 20 1757, a French force totaling 8,000 men (including the 2nd Battalion) was gathered at Carillon. On August 1, this force left Carillon with Montcalm and advanced upon Fort William Henry. The battalion then took part in the siege of Fort William Henry which lasted from August 5 to 9. On August 16, after the capture and destruction of the fort, the French force reembarked and returned to Carillon. On September 4, the battalion left Carillon and arrived at Saint-Jean on September 7. It then worked at the fortification of the place. On October 12, a piquet of the battalion was sent to Carillon to garrison the place during winter. On October 27, Lévis sent the battalion to Québec to garrison the town during winter.

On March 13 1758, Indian scouts located a party of Rogers' Rangers near Fort Carillon. A small detachment of the battalion was among the party sent against them. They engaged them during the so called skirmish of Snow Shoes. The rangers lost 125 men in this engagement.

On May 15, the shortage of supplies was such in Québec that the battalion, who had wintered there, left the town for Carillon where ampler supplies were available. On June 3, it arrived at Carillon where all other regular battalions were assembling to stop the British offensive on Lake Champlain.

On June 30, the battalion was part of Bourlamaque's detachment who took position at the head of the portage at the outlet of Lake Saint-Sacrement (present-day Lake George).

On July 6, it followed the main French force to the left bank of the fall before retreating to Carillon. On July 7, it worked at the entrenchment in front of the fort. On July 8, the battalion took part in the victorious Battle of Carillon where it was deployed at the extremity of the right wing under Lévis. In this battle, the battalion lost Lieutenant Daudin and 7 soldiers killed; and Captain d'Hébécourt, Captain Le Comte, 2 lieutenants and 45 soldiers wounded. Between November 1 and 5, the entire French army left Carillon to move to its winter-quarters, leaving detachments from various battalions to guard the fort. The battalion took up its winter-quarters between Saint-Augustin and Grondines.

In 1759, the 2nd Battalion formed part of Bourlamaque's force assigned to stop the British advance from Lake Champlain. In September, after the capitulation of Québec, the 2nd Battalion withdrew towards Montréal where the remnants of the French army were concentrating. In November, the regiment took up its winter-quarters along the Chambly River.

By March 1760, 51 men of the battalion had been detached to Saint-Jean while 36 were unfit for duties. This left 358 men available for the planned expedition against Québec. The latter were supplemented by 237 men from the militias of Chambly, Saint-Charles, Saint-Denis, Saint-Antoine and Saint-Ours who were integrated into the battalion.

From April 21 to 25, transport vessels gradually sailed from Montréal for Québec. Overall the battalion then counted 27 officers, 370 regulars, 223 militia and 38 non-combatants for a total of 658 men.

On April 28, it took part in the Battle of Sainte-Foy where it was deployed in the second line. On May 24, after the arrival of British reinforcements at Québec, the battalion left Jacques-Cartier. In mid August, La Reine Infanterie and Royal Roussillon Infanterie were sent to Saint-Jean under the command of M. de Roquemaure who was later reinforced with all the Milice du district de Montréal. On September 9, after the capitulation of Montréal, the battalion still counted 346 men and 21 officers.

On September 16, as per the terms of the capitulation, the battalion was embarked aboard British transports who reached Québec on October 10 and 11 and then sailed for France where they arrived in December. 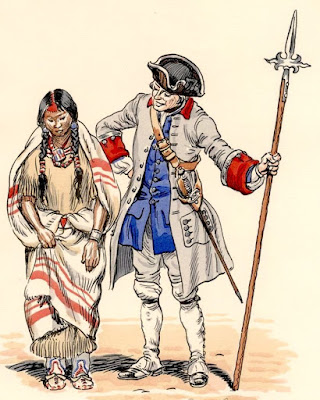 It is unknown if Michel Vielle dit Cossé was left behind in October of 1760, because he was wounded or a prisoner of war, or perhaps he went to France with the regiment, and returned before he married Marie Elisabeth Marier (1740–1785) on 3 Aug 1761 in St-Charles-sur-Richelieu, Quebec

During much of the war Montcalm placed Canadian regular officers and some French officers, those “most agreeable to the different nations”, with Indian scouting and raiding parties, and under their leadership and guidance--the Frenchmen were not authorized to give orders to Indian warriors—the natives perform ed valuable service for his army.  Numerous officers from Montcalm ’s line regiments served with Indians because there were not enough Canadian regular officers to lead the militia and act as military attaches with the Indians; after all, they had their own French colonial regulars to command.

Captain Guillaum e de Montbrais of the Regiment de La Reine reported that during his five years in Canada he spent a total of only eighteen months recuperating in quarters because during the campaigning season and the winter he was on detached service with the Indians at the advanced posts.  Swiss line officers with the Regiment Suisse de Karrer in Louisiana also spent a considerable amount of time fighting against Indians and in company with them.