Characterized by the bold use of color and motifs that emphasize birds, flowers, and elaborate decoration, Pennsylvania Dutch art was nurtured on the isolated farms where those settlers made their homes.

Beginning in the late seventeenth century, immigrants from Switzerland, the Palatinate, and the Upper Rhine regions of Germany arrived in Pennsylvania.

For the most part, they were peasants, small farmers, and artisans. The Pennsylvania Germans were industrious people; they cleared the heavily wooded lands and tilled the soil to establish a new life in America.

Agriculture was the major industry, but as society became more firmly rooted, farmer-craftsmen turned some of their energies to producing and decorating the many articles of daily life.

By isolating themselves from outside influences, the Pennsylvania Germans were not assimilated into the mainstream of American culture until this century. Thus, for over two hundred years, Pennsylvania German (Dutch) art flourished to become an important element of the American folk art tradition.

When I carved the frame for Joyce's mirror (above) I had no idea that I would ultimately discover my Pennsylvania Dutch roots over two decades later.

Do you think DNA has anything to do for my interest in Pennsylvania Dutch art in the 1970s?

Who are the Pennsylvania Dutch?

The Pennsylvania Dutch are a cultural group formed by early German-speaking immigrants to Pennsylvania. 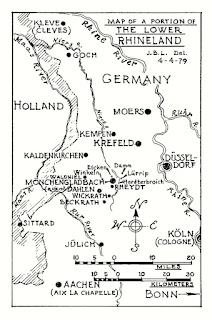 Many of these immigrants originated in what is today southwestern Germany (Rhineland-Palatinate and Baden-Württemberg).

Historically they have spoken the dialect of German known as Pennsylvania German or Pennsylvania Dutch. In this context, the word "Dutch" does not refer to the Dutch people (Nederlanders) or their descendants, but to Deitsch or Deutsch (German).

We are descended from one of thirteen Mennonite families from Krefeld, Germany who settled in Germantown, Pennsylvania in 1683. 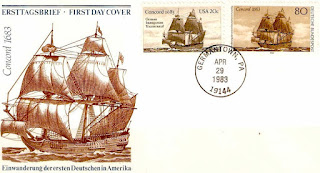 The Krefeld, Germans arrived on board the galleon Concord. The ship is also known as the "German Mayflower". The Concord took sail on July 6, 1683, in Rotterdam under Captain William Jeffries with 57 passengers. The journey took 74 days to reach Philadelphia (Germantown) on October 6, 1683 (which was declared German-American Day in 1983). 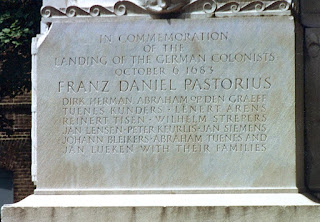 Reinert Tisen also known as Reynier Theissen or Tyson, our 8th great-grandfather, was one of the The Krefeld, Germans who arrived on the Concord.

He was the 4th great grandfather to President Theodore Roosevelt.  See: http://a-drifting-cowboy.blogspot.com/2012/02/cowboy-legacy-peaceable-folks-and-rough.html

Posted by Drifting Cowboy at 11:25 AM No comments: