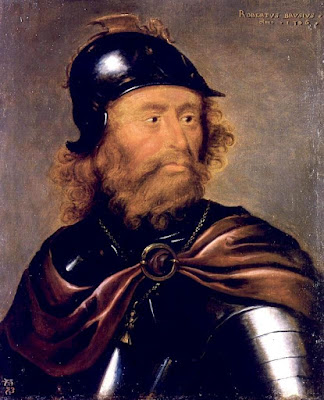 I’m well into my 3rd decade of studying my family history (genealogy).

Like everything else in 2020 my genealogy gave me a huge surprise. This one came when ancestry (dot) com revised my ethnicity status to nearly 50% Scottish.

Just a dozen years ago I discovered a couple hundred French-Canadian ancestors that came to New France between 1635 and 1755, and were involved in the “Fur Trade.”

Back to the subject at hand… MY SCOTTISH HERITAGE

This week I made the most exciting discovery yet… ROBERT "THE BRUCE,” KING OF SCOTLAND, is my 20th great-grandfather.

Robert I (11 July 1274 – 7 June 1329), popularly known as Robert the Bruce (Medieval Gaelic: Roibert a Briuis; Modern Scottish Gaelic: Raibeart Brus; Norman French: Robert de Brus or Robert de Bruys; Early Scots: Robert Brus; Latin: Robertus Brussius), was King of Scots from 1306 to his death in 1329. Robert was one of the most famous warriors of his generation and eventually led Scotland during the First War of Scottish Independence against England. He fought successfully during his reign to regain Scotland's place as an independent country and is now revered in Scotland as a national hero.

In February 1306, Bruce, having wounded Comyn, rushed from the church where they had met and encountered his attendants outside. He told them what had happened and said, "I must be off, for I doubt I have slain the Red Comyn." "Doubt?" Roger de Kirkpatrick of Closeburn answered. "I mak sikker" ("I'll make sure," or "I make sure"). Kirkpatrick then rushed into the church and killed Comyn. For this, Bruce was then excommunicated by Pope Clement V (although he received absolution from Robert Wishart, Bishop of Glasgow). Bruce moved quickly to seize the throne, and was crowned king of Scots on 25 March 1306. Edward I's forces defeated Robert in the battle of Methven, forcing him to flee into hiding before re-emerging in 1307 to defeat an English army at Loudoun Hill and wage a highly successful guerrilla war against the English.

Bruce defeated his other Scots enemies, destroying their strongholds and devastating their lands, and in 1309 held his first parliament. A series of military victories between 1310 and 1314 won him control of much of Scotland, and at the Battle of Bannockburn in 1314, Robert defeated a much larger English army under Edward II of England, confirming the re-establishment of an independent Scottish kingdom. The battle marked a significant turning point, with Robert's armies now free to launch devastating raids throughout northern England, while also extending his war against the English to Ireland by sending an army to invade there and by appealing to the Irish to rise against Edward II's rule.

Despite Bannockburn and the capture of the final English stronghold at Berwick in 1318, Edward II refused to renounce his claim to the overlordship of Scotland. In 1320, the Scottish nobility submitted the Declaration of Arbroath to Pope John XXII, declaring Robert as their rightful monarch and asserting Scotland's status as an independent kingdom.

In 1324, the Pope recognised Robert I as king of an independent Scotland, and in 1326, the Franco-Scottish alliance was renewed in the Treaty of Corbeil. In 1327, the English deposed Edward II in favour of his son, Edward III, and peace was concluded between Scotland and England with the Treaty of Edinburgh–Northampton in 1328, by which Edward III renounced all claims to sovereignty over Scotland.

Robert died in June 1329. His body is buried in Dunfermline Abbey, while his heart was interred in Melrose Abbey and his internal organs embalmed and placed in St Serf's Chapel, Dumbarton, site of the medieval Cardross Parish church.

Lord Donald MacDonald Of Islay, of the Isles & Harlaw 1359-1423 — Son of Margaret Stewart Princess of Scots

Robert's ancestors came to Great Britain from Normandy, France with William the Conqueror in 1066

Posted by Drifting Cowboy at 8:37 AM No comments: