The Life and Times of Cowboy Granddad


For the past 22 years I have been known, to a few, as Cowboy Granddad.  It's a handle my daughter-in-law bestowed on me when my grandsons were growing up.

Four years back I crossed over my allotted "three score and ten" threshold, and next year I'll hit the "3/4 Century" mark.

I guess now is a good time to reflect on a my live.  It's been good one filled with lots of wonderful small adventures, so any time the 'Old Man' calls me to cash in -- I'm ready.

I feel very fortunate to have gotten the answers to that question many people have yet to know...


Who Do You Think You Are?

I've studied my family history for 40+ years and have had a modicum of success.

I am proud to claim a "cowboy legacy."   My family roots have, for the most part, been tied to the land.

My recent ancestors, the past twelve generations, came to America (and Canada) from England, Scotland, Ireland, Wales, France, Germany, Netherlands, Switzerland and Belgium.

Among them there were Puritans, Quakers, Anglicans, Catholics, Huguenots, Baptists, Presbyterians, and a plethora of other Protestant sects.

Over the years I personally tried my hand at home building, cowboy folk art, book writing, and even took a shot at politics.

A couple of years back my eldest grandson had a college class project that required him to interview his granddad to ask about the changes seen in a lifetime.

I responded, in part, by taking all of my favorite photos, and putting them in a slideshow that reflects the past "three score and ten."

Posted by Drifting Cowboy at 8:09 AM No comments: 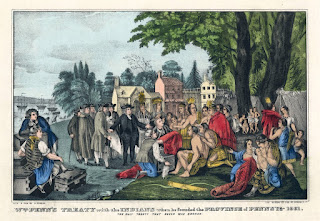 In 1706 John Hallowell, my 8th great grandfather, was part of the Quaker community in Abington, Pennsylvania that helped form the American identity in the 1700s.

Dubbed the “Quakers” because they “trembled at the Word of the Lord,” the Religious Society of Friends fled persecution in England, Germany, Ireland, and Wales for the shores of the North American colonies in the 1600s. Though the Quaker beliefs of gender equality, universal education, and positive relations with Native Americans were rejected by most colonists, by 1700 more than 11,000 Quakers had made America their home and come to dominate politics and daily life in Pennsylvania and parts of New Jersey. Other colonies were not as tolerant. Quakers stood out from other settlers because of their egalitarianism, rejecting the bow as a greeting and popularizing the handshake. They typically lived plain, disciplined lives as farmers, shopkeepers, and artisans, but in Massachusetts, some faced the gallows for their religion, while others were banished. Many other Christians believed that the Quaker practice of silent worship undermined the Bible. Even so, Quakers remained loyal to their convictions, and over time inspired progress including the abolitionist movement to end slavery by the 1800s.

He is the first immigrant founder of all of the Hallowells in America.

"John Hallowell of Hucknall, Nottinghamshire, and Mary Holland of Millnepney, in Derbyshire, declared their intention of marriage" with this record appeared the certificates:
"I do give my free consent that my soone should take Mary Holland to wife, and that she should take him to husband"

and: "We do give our free consent that John Hallowell shall have our daughter to wife. Knowing nothing but that he is cleare from all other women.

John came to America with a Quaker certificate dated 19 Dec 1682 from the Derby Monthly Meeting in England as follows:

"Deare Friends:
These are to signifie unto you of John Hallowell of Huchnal in ye parish of Sutton, County of Nottinghamshire, having in his mind to remove beyond the sea and he being within ye compas of this our mo. Meetinge, we are willing to signifie to Friends that we know concerning him, of his behaviour, & manner of Life in the time yt he has Lived amongst us, whcih has been so we know soberly, and honestly, in his callings & dealings which has been a savor amongst ye people of ye world, and we know nothing but that he goes cleare as to any outward Engagement to any heare, and to ye truth he has lived answerably to ye measure which he has received; and hath no ways caused it to suffer, and our desires are yt he may keepe close to ye measure of God, which hee hath received, that he may be a good savor to ye truth in these remote places.

So having not much more but our dear son in ye truth, to all faithful Friends we rest & remain in ye service of ye blessed truth with you all, in ye measure.
//signed// Samuel Barke & others"

In 1696 he moved his family to a 630 acre tract of land near Abington in Philadelphia Co. This land was part of 2500 acres which Thomas Holme first had under warrent from William Penn in 1684 by patent dated 29 Jan 1688. Silas Crispin, the executor of Thomas Holme's estate, sold 630 acres of this land in "Hill Town" (as Abington was then called) to John Hallowell by deed dated 15 Jun 1696 for Ð58 16 shillings.


Every now and again I happen onto a forum website where somebody explains they have an opportunity to buy a used Old Town canoe, so they're seeking the opinion of people who have owned and used them.  This post is for those folks who want to know about two great Old Town canoes no longer being manufactured.

I wouldn't part either for any reason because -- for me -- they are two of the best -- solo -- fishing canoes ever made.  There are slightly better tracking and faster canoes, and I wouldn't take them on a river with anything greater than class 1 water, but for flat-water fishing they are as good as anything ever built.

I'm now 73 years old and these two canoes are just the ticket for an old man.  They are both light weight and easy to paddle solo with a traditional paddle or a double bladed kayak paddle.  They are also both capable of carrying all the gear I need for a two or three day flat-water canoe adventure.

Finally, they are both low maintenance -- especially if you keep them under a roof.

Old Town finally discontinued the Pack canoe a few years ago.  I suspect the main reason it was discontinued is that shipping companies tended to beat the hell out of them, and nobody wants to pay a thousand dollars for a brand new damaged canoe.  When I bought mine from LL Bean, the shipper severely damaged two of them so much that I rejected them.  Finally, a third one arrived with just minor damage I could live with.


Don't get the wrong idea, these royalex canoes are plenty tough if you treat them right.  I've car-topped royalex canoes all over the Western United States and Canada without any damage.  But, I also don't drag them on sand bars or gravel beds. 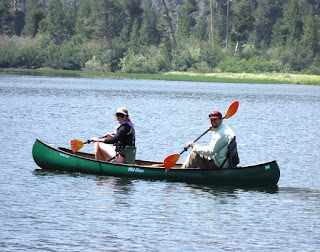 I think a 14' canoe, that weighs just 52 pounds, is just about the best all around canoe ever made.  It's just fine to solo, but is also comfortable with two paddlers. 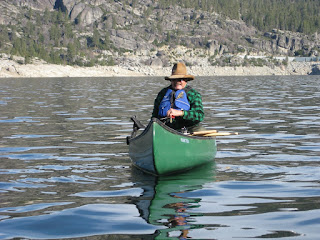 The only reason I use my Pack canoe instead of the Hunter canoe is wind.  The extra two feet of length makes paddling, in seriously windy conditions, just that much harder.

I've also added outriggers and have rowed both of these canoes. 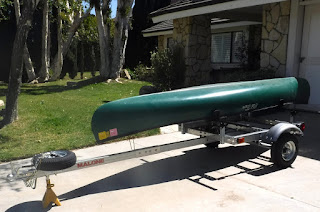 My Pack canoe on its brand new Malone Xtralight trailer.  This will save a lot of stress on my old back.  See you on the water.