Meanwhile back at the ranch -- Adobe Villages 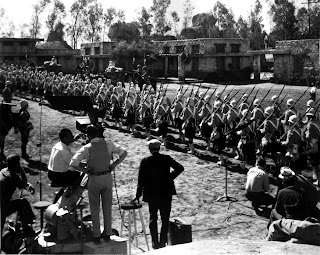 There were at least two adobe villages on the Iverson Ranch, and there may have been some single adobes that were not part of a larger village.  The set for the soldier barracks (photo above) in Wee Willie Winkie (1937) was located in Indian Hills north of the grove and west of cave rocks.

The comparison photo above shows the west side of cave rocks as they appeared in Wee Willie Winkie (1937)--on the left--and Wild Stallion (1952)--on the right.  The comparison helps pin point the location of the adobe village used in Winkie, and also shows us they were long gone by 1952. 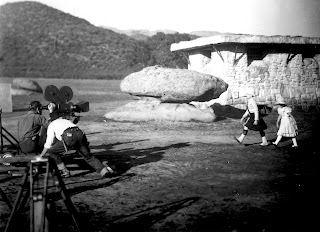 In another still (above) from Wee Willie Winkie (1937) we see a lone adobe next to Stacked Rocks on Sheep Flats.  By 1945 the Iversons had a Western Street in this location.  One can't help but think perhaps some of the original Winkie set was converted and used when Gary Cooper had the Western Street constructed for Along Came Jones (1945). 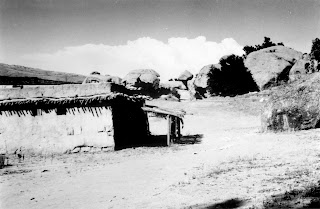 Above is a photo of another lone adobe from an unknown film--maybe it's the same adobe as in the Winkie photo above.  In this still you can clearly make out Hook Rock set off by the skyline (left center).

In my research the first use of adobe type structures was in The Lives of a Bengal Lancer (1935).  In the publicity still above you can see two adobe buildings on the far left.  What's interesting is that we know an adobe village was located in this area as late as the late 1950s.  In this still you can see Potato Rock on the right and you can just make out Three Ages Rock to the left of Potato Rock. 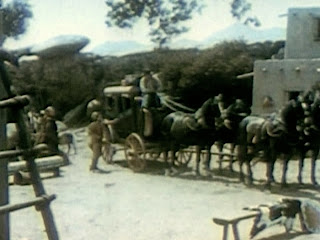 The screen capture above from a scene in Romance of the West (1946) shows us Potato Rock with an adobe just north of it. 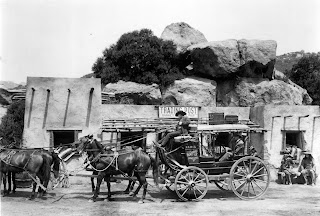 In the still above (from an unidentified Western) we find an adobe located near Devil's Doorway.  Perhaps this is part of the adobe village located against 'The Wall' not far away. 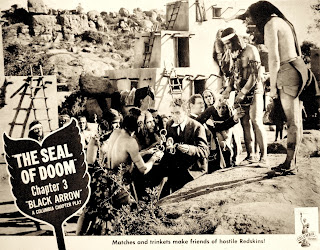 In the lobby card photo above from the serial Black Arrow (1944) we see 'Hole in the Wall' to the north.  This is consistent with an adobe at 'The Wall' location. 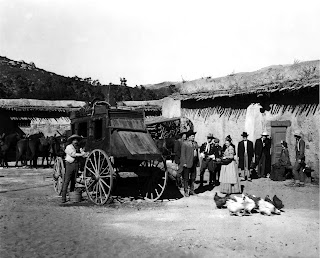 Above is a publicity still from John Ford's Stagecoach (1939).  If you remember--Ford used part of two adobes as stagecoach relay stations.  The first station was Dry Fork (above) which offered a wonderful view of Hook Rock as the stagecoach arrived.  The second adobe must have been the other village located near 'The Wall' that gave us the dramatic view of Garden of the Gods as it arrived. 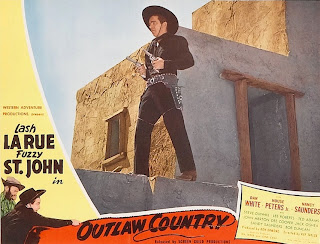