Meanwhile back at the ranch -- Insert Road 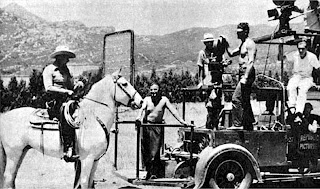 B-Western chase scenes could be lensed almost anywhere on the Iverson Ranch, but filming close-ups (also called insert shots) of our six-gun heroes--on their galloping horses--required a road wide enough for a camera truck as well as the actors and their horses. 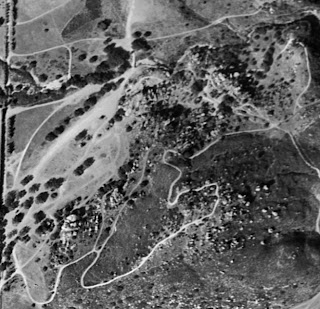 Running through the heart of an oak tree studded valley on the west side of the upper Iverson Ranch there was a perfect insert road, but it was only about a quarter mile long.  Looking at the photo above it's pretty easy to locate the insert road on the left half of the photo.  Just look for the longest, widest and straightest dirt patch between oak trees.

The fact that the Iverson insert road was so short puts me in mind of a tale once told by actor Charles Starrett.  He was describing low budget Westerns when he wrote, "In the cheaper pictures there's only one group of horses. The "outlaws" are photographed riding away on these, then the camera tops grinding, the horses are led back, the "posse" mounts them and, with the camera grinding again, they give chase to the bandits."

The video clip (above) shows you what the filming action looked like while they were lensing insert shots for a scene in Bells of Rosarita (1945). 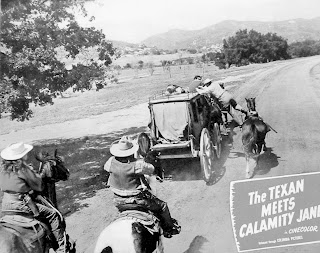 The lobby card photo above from a scene in The Texan Meets Calamity Jane (1950)  gives you a good look at a photo filmed from a trailing camera truck. 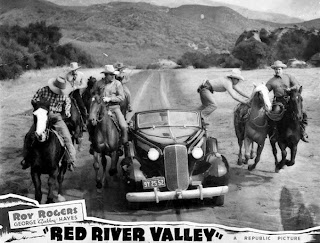 Above is a lobby card photo above from a scene in Red River Valley (1941) that was filmed from a leading camera truck.  That's Lookout Point and the turkey track at the top right corner. 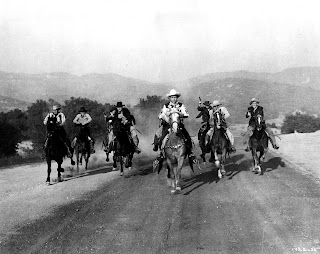 The still above from Song of Arizona (1946) is pretty typical of the photos taken on the Iverson Ranch insert road looking north. 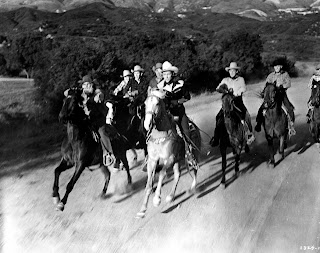 Here's another Roy Rogers still (above).  This one is from a scene in Utah (1945) and was also taken on the Iverson Ranch insert road looking north. 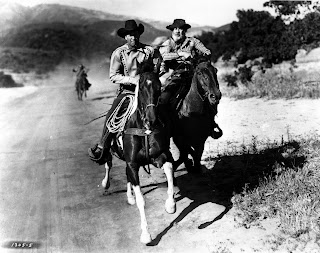 The photo above shows Wild Bill Elliott and Gabby Hayes on the insert road in a publicity still for Wagon Tracks West (1943). 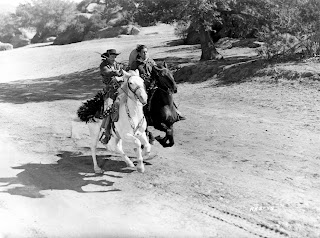 In this still from Roll, Thunder, Roll! (1949) you can see the tire tracks from the camera truck ahead of the riders being photographed. 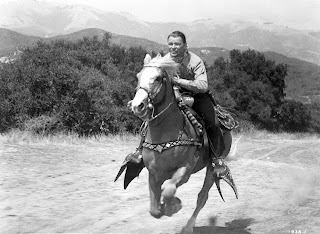 This Spoilers of the Plains (1951) still with Roy Rogers and Trigger picks up Oat Mountain in the background. 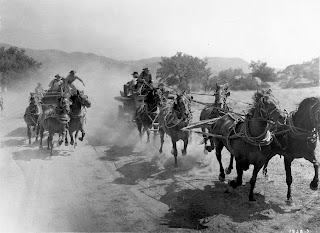 Here's another movie still (above) from Spoilers of the Plains (1951).  This one picks up the molars (rock formation) in the background. 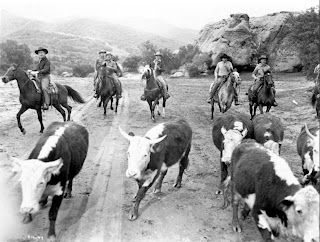 Here's another view of Lookout Point and the turkey track (top right corner) in a publicity still for Old Oklahoma Plains (1952).

The still above from a scene in Rex Allen's The Last Musketeer (1952) actually captures part of the camera truck in the photo. 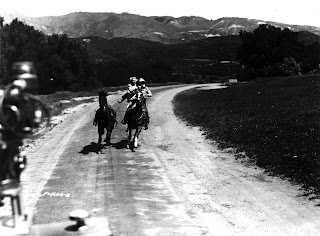 Here's another still that catches a piece of the camera truck while photographing a stunt scene in Gene Autry's Robin Hood of Texas (1947). 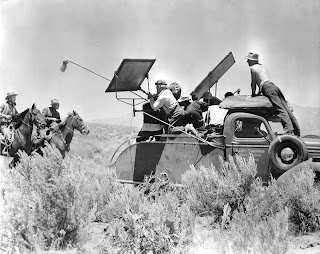 The close-up photo of a 1940s camera truck--not taken on the Iverson Ranch--shows you what an insert shot in progress might have looked like.

Posted by Drifting Cowboy at 1:35 PM