There was no shortage of cowgirls packin' iron in vintage advertising from the first half of the 20th century.  Smart ad folks knew pretty gals attracted the fellows, and the image of a 'Little Miss Sure Shot' was attractive to both men and women. 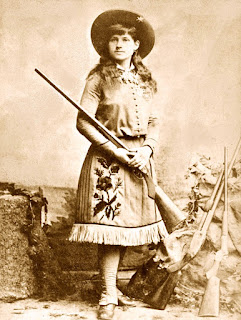 Maybe that's why so many young women from that era took to outdoor sports like hunting and fishing.  Plenty of country girls like mom -- who was born in Montana and grew up in Idaho -- had a first hand knowledge of firearms and how to use them.

Somewhere along the line dad had acquired a well broke-in Iver Johnson revolver known as a 'target-eight.'  The darn thing was more or less a relic, but was still safe to shoot as long as you didn't mind the little burnt powder it spit out. 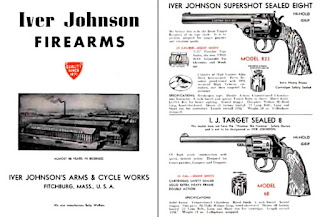 Dad's Iver Johnson was an eight-shot .22 rim fire revolver that was actually pretty accurate up to 50 feet or so. 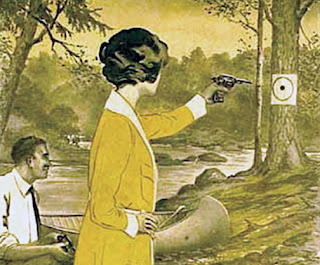 When we lived in Oakhurst, California during the late 1950s we spent plenty of summer evenings plinking at targets on a cut bank next to our pump house.

There was never a question in anybody's mind -- mom was always the undisputed champion marksman of every family shooting match.

Posted by Drifting Cowboy at 10:30 AM