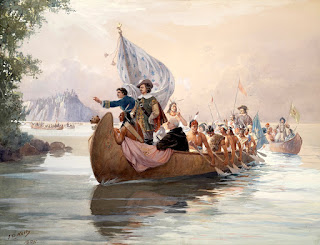 They both served under Champlain in the capacity of interpreters.

After the capture of Quebec by the Kirkes (England) in 1629, both brothers stayed on in the colony, living in the woods with the Indians.

When the French returned, about 1632, Jean Godefroy settled at Trois-Rivères, where he was to spend the rest of his life, but Thomas continued to act as an interpreter until he was killed by Indians in 1652.

Jean was born about 1607 in Lintot, pays de Caux, en Normandie, France; and died 1681 in Trois-Rivières, Canada.  He was the eldest son of Pierre Godefroy de Linctot and Perrette Cavalier.

In 1636, Jean married Marie Le Neuf  in Trois-Rivières, Canada.  Marie Leneuf was the daughter of Mathieu Leneuf, Sieur du Hérisson, and of Jeanne Le Marchant of Caen.  Marie Le Neuf was born about 1612 in Caen, Normandie, France, and died 27 Oct 1688 in Trois Rivières.

Between 1637 and 1658 Jean and Marie had 11 children, of whom 8 were sons who almost all distinguished themselves in the service of New France. 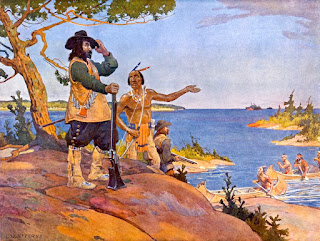 Thomas was born about 1610 in Lintot, pays de Caux, en Normandie, France; and died 1652 in (Huronia) Canada.  He was the younger son of Pierre Godefroy de Linctot and Perrette Cavalier and the brother of Jean Baptiste Godefroy de Linctot, Sieur and Anne Godfroy.

In 1641, a Trois Rivières land grant to him by governor M. de Montmagny.

"Both Jean and his brother Thomas, Sieur de Normanville, were accustomed to life among the Indians, both Iroquois and Algonkins. Thomas Godefroy was captured by the Iroquois and tortured to death by them." 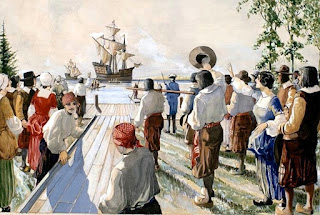 +iv. Jeanne Testard, born about 1642 in Normandie, France; and died 18 Jan 1723 • Laprairie, Quebec, Canada.  She married Francois Leber (Lebert) who became known as "The Father of the Fur Trade."

Our Lineage from Anne Godefroy:

Posted by Drifting Cowboy at 9:56 AM