Two Carignan-Salières Soldiers and a Pair of Filles Du Roi 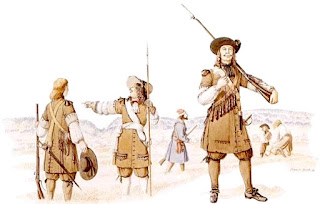 Lucy Passino (Pinsonneau), my second great-grandmother, can trace her French-Canadian ancestry back to two Carignan-Salières soldiers and a pair of filles du roi (daughter's of the king).

We are descended from two French soldiers who arrived in New France (Canada) in 1665. They were part of the Carignan-Salières Regiment sent by King Louis XIV to protect early settlers from the Iroquois. 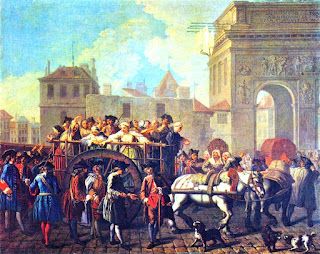 Both of these soldiers married "King's Daughters" (French: filles du roi), which refers to the approximately 800 young French women who immigrated to New France  between 1663 and 1673 as part of a program sponsored by Louis XIV of France.

By the mid 1600's the French in New France had developed very strong commercial ties with the Algonquin and Huron Indians in the fur trade. So when the Iroquois waged war on the Algonquins and Hurons, as they had for many years, even before the Europeans arrived in North America, the French went to the aid of their commercial partners.

By doing so, the French earned the hatred of the Iroquois. Prodded on by the English, who also wanted the French out of North America, the Iroquois began raiding French villages and slaughtering the people.

When the Iroquois began raiding French villages and slaughtering the people, the French began to form military units under militia Captain Pierre Boucher. However, this wasn't enough so Governor Davaugour dispatched Pierre Boucher to France to seek help from King Louis XIV.

In 1664, following the request of the Sovereign Council, the French finance minister Jean-Baptiste Colbert ordered the Carignan-Salières to reinforce the existing 100 man force in New France.

This reinforcement was as much, if not more, motivated by mercantile ambitions [fur trade] than actual cries for help from New France.

By now the regiment had been reduced to eight companies of about 400 troops; this was insufficient to meet King Louis XIV's demand for a large military force. The regiment's strength was increased to 20 companies and 1000 troops by absorbing 12 other French companies, including those from the Lallier, Chambellé, Poitou, and Broglio regiments.

A popular erroneous story in New France was that the regiment had fought in the Austro-Turkish War of 1663-64; the story may have arisen from troops of the 12 new companies, many of whom may have fought in that war. 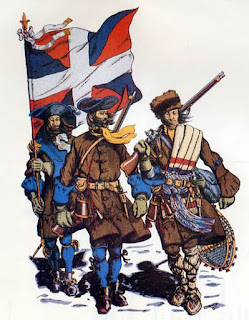 Seven ships were required to transport the c to New France. The first, Le Vieux Siméon, departed La Rochelle 19 April 1665, arriving at Quebec 1 July 1665.  On board were the companies of La Fouille, Froment, Chambly and Rougment. The Le Vieux Siméon was a Dutch ship chartered by a La Rochelle merchant, Pierre Gaigneur, who was well-experienced sailing between France and its colonies.

The next two ships to depart from France were La Paix and L’Aigle d’Or. The former carried the companies of La Colonelle, celles de Contrecoeur, Maximy, and Sorel, and on board the latter were de Salières, La Fredière, Grandfontaine and La Motte.

These both were royal ships of the king’s navy that departed from La Rochelle 13 May 1665, arriving at Quebec 18 August 1665.

Four companies arrived with Alexandre de Prouville de Tracy on Le Brézé from the Antilles, arriving in New France 30 June 1665. The captains of these companies were La Durantaye (Chambellé), Berthier (L'Allier), La Brisardière (Orléans), Monteil (Poitou). Tracy had been in the West Indies as part of his royal commission to officially establish Louis XIV's rule of the French colonies, following the King's takeover of the French territories after the bankruptcy of the Company of 100 Associates.

The last ship to sail from France associated with the regiment was the Jardin de Hollande which carried the provisions and equipment for the troops.

Depending on sources, there are some contradictions as to when ships arrived in New France and what companies were on board said ships. 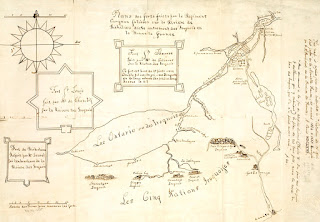 Over the next two years, the Regiment established a series of forts along the Richelieu River and launched attacks on the Iroquois. By the end of this period, their task was accomplished. The countryside became peaceful for a time.

About 800 of these soldiers went back to France. The remaining 400 stayed. The officers were encouraged to stay with promises of fiefs (land containing many square miles). Their troops were promised concessions of large tracts of land in these same fiefs. Many of whom married the newly arrived filles du roi. They could farm and start a new life in the New World... this land called New France -- Canada!

Most French-Canadians, like Lucy's parents, can claim descent from one or more of these brave soldiers.

For more about Lucy...

For more about our French-Canadian ancestry...

Many of Lucy's ancestors arrived in New France during the mid 1630s, and some of their descendants became voyageurs or coureurs de bois, part of Canada's rich fur trade.

Some of those voyageurs were the first Europeans to see Illinois, Michigan, Wisconsin and Minnesota.  Others helped explore the Mississippi River system and the far West.