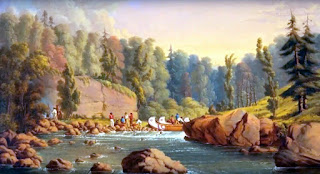 1608
Samuel Champlain made the first exploration into the interior of mainland North America. He sent Etiene Brule to live with the Huron Indians, to learn their language and trade routes. Champlain was the first to realize the great trade potential of the birch bark canoe.

1618
Etiene Brule arrived at the eastern end of Lake Superior. He may have reached the western shores as well. He was on a quest for a route to the Far East. He was one of the first to search for the North West Passage to the Far East.

1634
Jean Nicolet traveled through the Great Lakes to Green Bay on what is now Lake Michigan.

By the 1630′s furs were regularly leaving New France for Europe. These furs were mainly supplied by Indian traders, especially the Huron and Ottawa tribes. In Wisconsin the Winnebago tribes blocked the fur trade routes. They were attacked and defeated by the Ottawa and Huron. New tribes such as the Sauk, Fox, Potawatomi, and Ojibwe began moving into the area that is now Wisconsin.

1630s
Pioneer Ancestors That Settled in the Wilderness of New France Before 1637
http://a-drifting-cowboy.blogspot.com/2016/07/pioneer-ancestors-that-settled-in.html

1650s
Great Granddad was a member of the Traite de Tadoussac
http://a-drifting-cowboy.blogspot.com/2016/05/great-granddad-was-member-of-traite-de.html 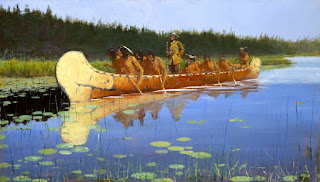 1659
Radisson and Grosseiliers made an illegal trip into the interior. His men built a trading post at Chequamagon Bay on Lake Superior and claimed to have found a portage into the west (maybe Grand Portage).

1660s
Was Great Grandma A Marranos of Portugal
http://a-drifting-cowboy.blogspot.com/2014/12/was-great-grandma-one-of-marranos-of.html 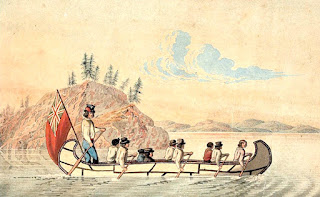 1670
The Hudson Bay Co. chartered. HBCo claims all the lands that drained into Hudson Bay as their trading area.

1679
Daniel Greysolon, Sieur Du Luth used the Savannah Portage to reach the interior of Minnesota and Mille Lac. Later he returned to Lake Superior; traveled up the northwest shore and built a post on the Kaministikquai River. 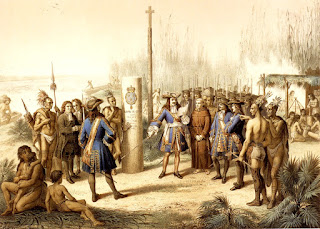 1682
La Salle traveled through the Great Lakes and down the Mississippi to its delta. He claimed all the lands drained by the Mississippi and its tributaries for France.

1680s
Great Uncle Laurent a Voyageur to the Country of the Illinois and Louisiana
http://a-drifting-cowboy.blogspot.com/2016/07/great-uncle-laurent-voyageur-to-country.html

1689
War broke out between France and England. The fur trade is interrupted as far west as Minnesota.

Great Granddad Gabriel was a Voyageur on the Ottawa River
http://a-drifting-cowboy.blogspot.com/2016/07/great-granddad-gabriel-was-voyageur-on.html

1690s
Great Grandma was an Orphan, Killed by Indians
http://a-drifting-cowboy.blogspot.com/2016/05/great-grandma-was-orphan-killed-by.html

Great-aunt Denise was a Mother of Voyageurs
http://a-drifting-cowboy.blogspot.com/2016/07/great-aunt-denise-was-mother-of.html

1700s
Uncle Charles was a Voyageur for Cadillac
http://a-drifting-cowboy.blogspot.com/2016/06/uncle-charles-was-voyageur-for-cadillac.html

1712
Wars with the Fox Indians began. The Fox and Wisconsin Rivers trade route is closed. Trade across the upper Mississippi region was disrupted. 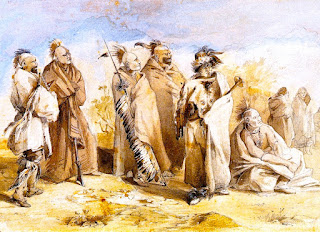 1730
The Fox Wars end after they are nearly exterminated by the French and their Indian allies. The trade routes reopened, and goods were carried west and brought directly to the Indians by licensed traders.

Now the Dakota had direct access to the trade goods and no longer needed the Ojibwe. An attempt was made to push the Ojibwe off Dakota lands, but within 50 years the Ojibwe succeeded in driving the Dakota out of their eastern woodlands.

The French and Indian Wars were all about the Fur Trade - Our Ancestors were on both sides
http://a-drifting-cowboy.blogspot.com/2016/07/the-french-and-indian-wars-were-all.html

1754
The French and Indian War began. The fur trade was interrupted again. Most of the licensed traders and their voyageurs were called east to fight the British. 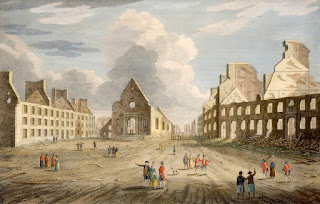 1760
New France was conquered by the British. All trading rights and privileges became British. Furs were now sent to London instead of Paris and most trade goods were supplied through London Agents.

1763
Britain tried several different arrangements to control the fur trade – imperial control, limiting trade to only five posts, and exclusive licensing. In spite of this, unlicensed traders continued to operate.

1765
Alexander Henry received exclusive rights to trade on Lake Superior. He and his partner, Jean Baptiste Cadotte, built a post at Chequamagon and sent outfits into the Fon du Lac region.

1767
Trade regulations were returned to the colonies, exclusive licenses were abolished. The start of unregulated trade increased the use of liquor in the fur trade. British traders were allowed to establish wintering posts amongst the Indians. Construction began on permanent structures at Grand Portage.

1774
The Quebec Act became law. The western Great Lakes and all land north of the Ohio River became part of Quebec and subject to its laws and regulations. Green Bay and Prairie du Chein became interior trading centers. Traders started to exploit the region northwest of Grand Portage, but cut-throat competition reduced the profits. Small partnerships were formed to avoid or oppose the competition. The American Revolution caused some traders to avoid areas south and west of the Great Lakes and encouraged them to go north and west. Hudson Bay Company built a post on the Saskatchewan River.

1778-79
First agreements were made between partners that would become the North West Company, the first joint stock company in Canada and possibly North America. Peter Pond traveled to the Athabaska where he gathered so many furs he was forced to leave some behind. Generally throughout the 1770′s fur trade was centered around the large posts. 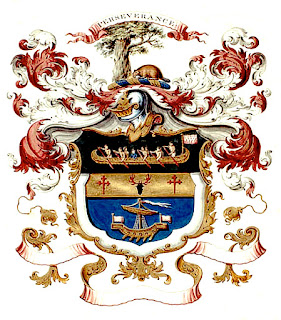 1784
In January the North West Company was formed. There were 16 shares in the company. Simon McTavish and the Frobisher brothers hold six shares. The first meeting of the Montreal partners and their winterers was held that summer at Grand Portage. Grand Portage was to be the company’s rendezvous point for the next 20 years.

1784
The Treaty of Paris ended the American Revolution the year before but caused severe problems for the new North West Company. Some of the partners left the company forming the General Company of Lake Superior and the South.

1787
The Beaver Club was formed. It was a very selective social organization of men who had wintered in Indian country. There were 19 original members.

The Hudson Bay Company built more posts in the interior because furs were being taken at the Indian camps by the North West Company. 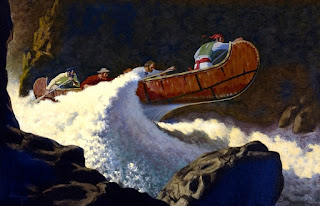 1789
Alexander Mackenzie searched for the North West Passage and instead reached the Arctic Ocean. Simon McTavish tried to lease transportation rights through Hudson Bay but was refused. The North West Trading Company began construction of trading boats on the Great Lakes. Jean Baptiste Perrault entered the Fon du Lac with six other traders in a two-year partnership. They built posts on the St. Louis River, Leech Lake, Pine Lake and Otter Tail Lake. John Sayer joined a one-year partnership and built a post on the St. Louis River.

1791
Alexander Henry sent a group of traders into the northern war zone between the Ojibwe and Dakota. The first year they traded at Leech Lake and the following year at Red River. They went north and then back to Grand Portage.

1793
Alexander Mackenzie successfully crossed the continent to the Pacific Ocean. The route that he had discovered was so bad that it was little used in the future.

1794
Discontent among the winterers of the North West Company due to small shares and poor trade goods caused the company to increase shares to its winterers and made clerks eligible for partnership. Jay’s Treaty gave reciprocal trading rights to British and American traders, each were allowed to cross the border to trade on the other’s territory. The treaty also opened New York for direct shipment of furs from Detroit and Michilimackinac. John Jacob Astor became involved in the fur trade.

1795
Alexander Mackenzie broke from the North West Company over bad feelings with McTavish. Mackenize did not agree with some of the policies of McTavish. Subsequently the XY Company formed from several existing companies. McTavish ordered all his departments to undersell the XY traders. This in turn increased the use of rum, tobacco, blue or red laced and braided coats which the chiefs desired and the practice of trading with the Indians during drinking bouts.

Was Great Grandfather Gabriel Loyal to the United States
http://a-drifting-cowboy.blogspot.com/2016/07/was-great-grandfather-gabriel-loyal-to.html 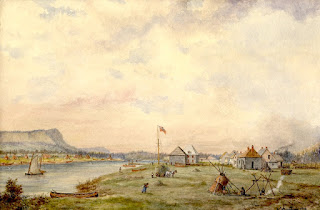 Pierre Poupart and One Hundred Years of Voyageur Descendants
http://a-drifting-cowboy.blogspot.com/2016/08/pierre-poupart-and-one-hundred-years-of.html

1803
The Americans purchased the Louisiana territory from the French. The Lewis and Clark expedition left in search of a passage to the Pacific Coast.


Cousin Andre Lagasse was an Interpreter for David Thompson
http://a-drifting-cowboy.blogspot.com/2016/08/cousin-andre-lagasse-was-interpreter.html

1808
The American Fur Company was formed by J.J. Astor. 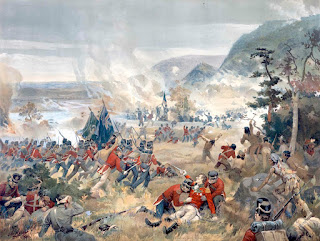 1812
The war between England and the United States disrupted trade all across the continent. The North West Company began operations on the Columbia River of the Pacific Northwest.

1815
The War of 1812 ended. The United States took back lands that had been occupied by the British, but tensions still continued. After this the United States forbid any foreign traders to operate in American territory. The North West Company withdrew. 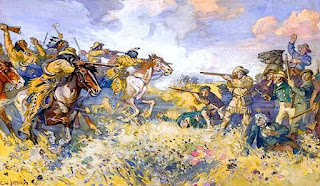 1816
By Congressional Act, the United States forbid foreigners to trade on US soil. The American Fur Co. hired ex-North West traders to work for them. A border war began between the North West Co. and the American Fur Co.. The old Fon du Lac District was renamed the Northern Outfit. 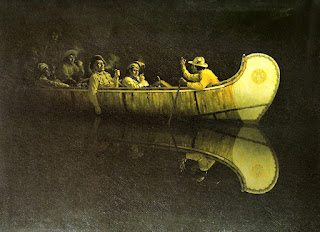 For the rest of my Ancestors SEE…
Back Trails and Tales of a Western Family
http://a-drifting-cowboy.blogspot.com/2016/05/back-trails-and-tales-of-western-family.html

Margaret Wilkie - my 2nd great-grandmother
born 29 MAR 1826 at St John's, Newfoundland, Canada
died 5 SEP 1910 • Plumstead, Kent, England
Thomas Wilkie, her father, was in the Royal Artillery which had been deployed in Newfoundland before 1812 until after 1826. He was the Armory Sergeant at the fort on Signal Hill in St. Johns.

Margaret McDonald - my 2nd great-grandmother
born 25 SEP 1832 at Cape Bear (lot 64) Prince Edward Island, Canada
died 7 DEC 1881 at Goderich, Huron Co., Ontario, Canada
As an infant Catherine Munn, her mother, arrived at Prince Edward Island in 1806 on the ship "Spencer" with over one hundred people from the island of Colonsay, Argyll, Scotland.

William Allen MacNeil - my great-grandfather
born 31 JUL 1865 at Goderich, Huron Co, Ontario, Canada
died 07 MAR 1927 at Detroit, Michigan, US5
His father was born in Scotland and emigrated from Scotland before 1830 and settled in Goderich Twp., Huron Co., Ontario, Canada.

For my current list of fur trade ancestors see:

Posted by Drifting Cowboy at 3:16 PM