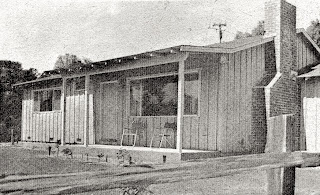 I just purchased a new Ruger American Rifle and a Redfield Revolution 3-9x40 scope, and I've been thinking about hunting in years past.

During the late summer of 1957 dad was building a modest two-bedroom home (above) in Oakhurst, California.  At that time Oakhurst -- situated in the foothills of the High Sierras -- had a population of 357 inhabitants.  At the very least you'd have to describe it as rural, in fact, it is the southern gateway to Yosemite National Park. 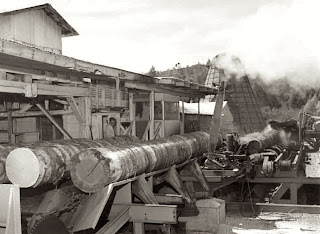 The only real industry in Oakhurst at the time was a small saw mill and tourism.

Dad had just finished a really rough year in the home building business in Los Angeles, and was fed up with modern civilization.  Now, he was seeking a simpler life style in the mountains.  1956 had been a year of recession.  It was also a year in which dad had built six custom homes for sale while the building industry was in the middle of a sand and gravel workers strike.  I remember dad holding his 30-30 rifle while I misted freshly plaster homes with water to aid the curing process.  He was a small nonunion contractor and was constantly harassed by labor unions.

Dad was a deer hunter, so we ate plenty of venison during the 1950s.  He and a buddy usually went to Utah, but occasionally he'd hunt in California, and if I was lucky he'd let me tag along.

Dad had just returned from a trip to Los Angeles with a load of cabinets for our new home when he called me out to his truck to see something.  He reached in the cab and pulled out a used Savage 30-30 bolt action rifle.  "It's yours," he said.  "If we're going to live in the mountains you might as well be able to hunt with me."  I was fourteen but would be fifteen during deer season, so he figured it was time for me to have my own rifle.

In order to get a license and deer tags I was required to take a 'Hunter Safety' class.  We were living on a ranch in Ahwahnee, California while dad was building our home, and we found a hunter safety instructor in nearby Nipinnawasee.  I can't even find Nipinnawasee -- which means plenty of deer -- on a map today.  The instructors name was Jerry Openshaw and he was a swell teacher.  He not only taught me the necessary safety course, but he taught me how to shoot my Savage 30-30 rifle as well.

Now this is going to sound like a tall tale, but I swear it's true.

As I said we were living on a ranch.  Actually it was just a rental house, but it was about a mile from the highway and required opening two barbed wire gates to get in and out.  The area was also plumb full of wildlife.  We saw mule deer and bob cats almost daily.

Anyhow to make a long story short… opening day of deer season had arrived and when I went outside to feed our dogs shortly after sunrise.  There were two forked horn mule deer bucks on the edge of a clearing about a hundred yards from the house.  I quickly ran back into the house and asked dad if I could take a shot at the deer.  He said okay, so I scooted out the back door with my rifle and one cartridge.  I shoved a round into the chamber, dropped to one knee, took aim and fired.  The buck jumped straight up into the air, pivoted, and disappeared into the woods.

By this time dad was standing on the porch behind me.  I heard him mumble "buck fever," but I was pretty sure I hit him, so we walked to the edge of the woods.  There -- 25 feet from where the buck was standing -- I found him.  The bullet went in just behind a shoulder, went through the heart, and lodged just under the skin on the opposite side.  It was a text book clean kill. 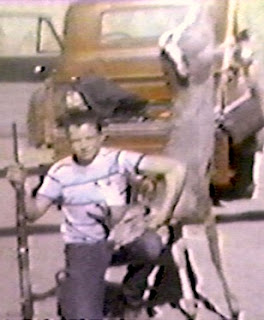 Right after the excitement of shooting my first deer was over remorse set in, but we gutted and cleaned the deer and had lots of good venison steaks that winter.

We moved into our new home before Thanksgiving of 1957.  We lived there until 1960, and hunted every year, but I never got another clean shot at a deer. 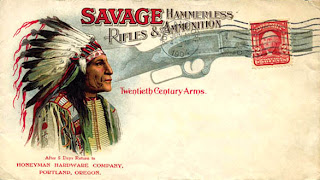