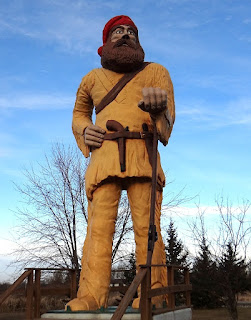 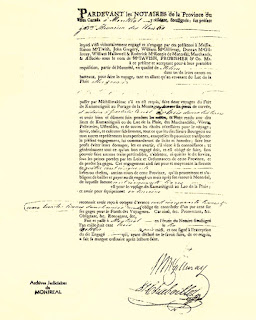 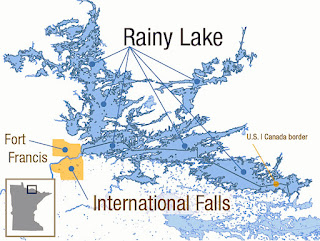 • By 1800 Rainy Lake and Rainy River were witnessing heavy travel. Here was the main route of the fur trade, the voyageurs' highway that linked the Great Lakes with outposts in the remote interior. Both the Hudson's Bay Co. and its rival, North West Co., had trading posts in Fort Frances.  Source: http://www.co.koochiching.mn.us/215/Rise-of-the-Fur-Trade

• Fort Lac la Pluie was a fur trade depot established by the North West Company sometime between 1775 and 1787. It was located on a high bank on the west side of modern Fort Frances, Ontario across from International Falls, Minnesota on the Rainy River downstream (west) of some rapids (Chaudière portage) where the river flows out of Rainy Lake. Upstream at the outlet of the lake was the old French post of Fort Saint Pierre (1731-1758).

The place was a depot rather than a trading post and served two purposes. By this time the trade had reached the rich Lake Athabasca country which was too far to reach from Montreal in one season. Each May, when the ice broke up, boats with trade goods would head west from Montreal and winterers with canoe-loads of fur would head east. They would meet at Grand Portage on Lake Superior, exchange goods and head back before the freezup. To further save time goods and furs would be shuttled between Grand Portage and Lac la Pluie. Second, it was a source of food. The voyageurs had no time to hunt and it was difficult to haul food from Montreal. Rainy Lake produced wild rice and fish. The fort also built kegs and canoes.  Source: https://en.wikipedia.org/wiki/Fort_Lac_la_Pluie

• On the 1825 census (a few years before his death) Jean-Baptiste Meunier was living in Chateauguay, Huntingdon, Lower Canada.  His daughter Marie Emélie Meunier dit Lagassé and her husband Gabriel Pinsonneau, Lucy's parents, are also living in the same neighborhood.