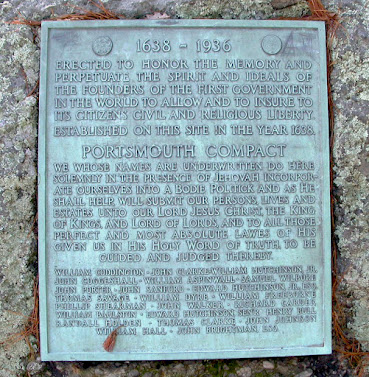 JOHN COGGESHALL SR. (DECEMBER 2, 1599 – NOVEMBER 27, 1647) WAS ONE OF THE FOUNDERS OF THE COLONY OF RHODE ISLAND AND PROVIDENCE PLANTATIONS AND THE FIRST PRESIDENT OF ALL FOUR TOWNS IN THE COLONY. He was a successful silk merchant in Essex, England, but he emigrated to the Massachusetts Bay Colony in 1632 and quickly assumed a number of roles in the colonial government. In the mid-1630s, he became a supporter of dissident minister John Wheelwright and of Anne Hutchinson. Hutchinson was tried as a heretic in 1637, and Coggeshall was one of three deputies who voted for her acquittal. She was banished from the colony in 1638, and the three deputies who voted for her acquittal were also compelled to leave.

Before leaving Boston, Coggeshall and many other Hutchinson supporters signed the Portsmouth Compact in March 1638 agreeing to form a government based on the individual consent of the inhabitants. They then established the settlement of Portsmouth on Aquidneck Island (called Rhode Island at the time), one of the four towns comprising the Colony of Rhode Island and Providence Plantations. 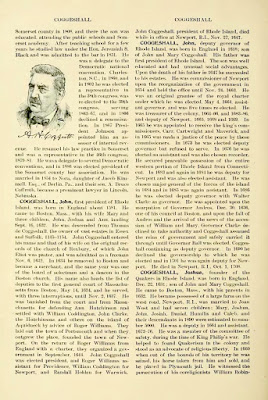 Coggeshall was very active in civil affairs, but a rift in the leadership of the colony caused him and several other leaders to leave in 1639, moving to the south end of the island and establishing the town of Newport. The towns of Portsmouth and Newport reunited in 1640 under the leadership of William Coddington, and Coggeshall was his assistant until 1647 when the two towns on Rhode Island united to form a common government with the towns of Providence and Warwick, and Coggeshall was elected President of the entire Colony of Rhode Island and Providence Plantations. His tenure was very short due to his death later the same year, but during his administration many laws were established which became the basis for the colony and the future State of Rhode Island. 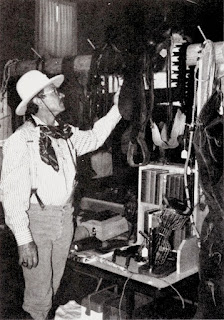 Yours truly at the Cody Old West Show, 1989
AN INTERESTING AND EXCITING FIND FOR AN OLD COWBOY 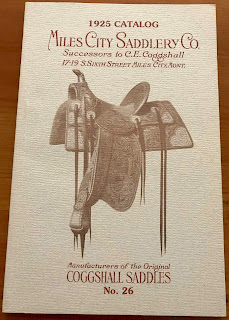 YOU MAY NOT KNOW THAT I BOUGHT, SOLD, AND TRADED OLD WEST ANTIQUES FOR ABOUT 30 YEARS.

OVER THE YEARS I HAD BOTH FURSTNOW AND MILES CITY SADDLES IN MY COLLECTION, SO THIS GENEALOGY DISCOVERY IS PRETTY NEAT: 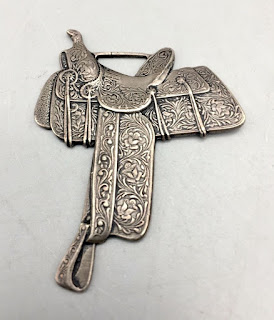 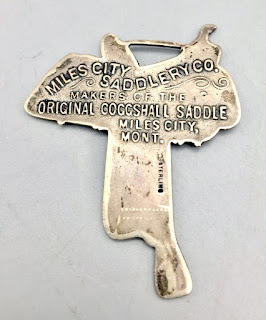 Al Furstnow, learned the saddlery business from his father. At age 19, he worked for Collins in Cheyenne in 1881. He worked in Miles City for Goettlich for about a year starting in 1883 and then for Collins in Omaha in 1884. He bounced around to Cheyenne and San Francisco and then came to work in Miles City for Robbins and Lenoir in 1894. In August, he opened Furstnow’s Saddle Shop with himself as the sole employee. In December, his shop got a boost in capital and another able business mind when Charlie Coggshall bought a half interest.

Charles E. Coggshall, who had been ranching with his father, disposed of his livestock and in December of 1896, they bought out the stock of Moran and W.J. Zimmerman, whom Moran had taken on as a partner in an attempt to stay in business. Furstnow and Coggshall added workers and became the only major saddlery between Billings and Dickinson, ND. In 1899, Furstnow and Coggshall split up, forming a rivalry that lasted well into the 20th Century.

Charles E. Coggshall was a strict taskmaster from the old school of hard work and incredible quality. He had the amazing ability to employ the best craftsmen anywhere. Although Charles himself was not a saddlemaker, his years of experience as an avid horseman enabled him to recognize the virtues of a good saddle. Improvements and changes were constantly being made over the years. Under his guidance, the Montana Saddle Tree was perfected. He was also responsible for improvements including the swell fork and flat-plate rigging. But what he and Furstnow are both credited with is making thousands and thousands of saddles.

In a highly successful effort to help fill the world’s need for saddles, the firms started by Al Furstnow and Charlie Coggshall blended assembly line techniques from back East with custom care exercised by the one-man shops of the West. The two large local saddleries employed dozens of men who came to specialize in various aspects of making this most necessary of cowboy tools. Some saddlemakers made four to six saddles per week and some stayed in the business long enough to make 2,000 to 3,000 saddles.

In 1909, things started happening in the local saddle business. Coggshall employee Clem Kathmann, along with Frank Jelinek and Bert Coleman, bought out Coggshall and formed the Miles City Saddlery Co. In 1910, Al Moreno, a highly talented stamper from California joined Furstnow in his new building. Furstnow was turning out about 800 saddles per year at that point. Both saddleries steadily built their businesses up to a peak in the late teens.

In 1916, the Miles City Saddlery made 1,937 saddles. At the outbreak of World War I, two dozen men were employed in the shop. Between 1910 and the Depression years of the ‘30s there were as many as 40 saddlemakers working in Miles City.

Posted by Drifting Cowboy at 10:27 AM