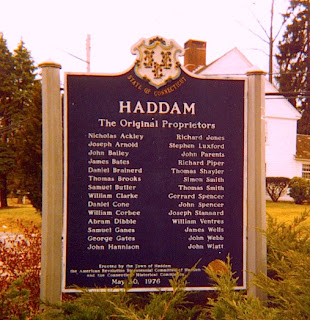 GENERATION 1
John BAILEY1 (Bailie or Baly as the name was then spelled) was our first emigrant ancestor.  He arrived from England on the ship BEVIS in 1638, and was part of the "Great Puritan Migration" between 1620 and 1640 when approximately 20,000 English colonists came to New England seeking religious freedom.
John was born about 1618, in Sheffield, Yorkshire, England, and died June 17, 1696, in Haddam, Middlesex, Connecticut.  In 1655, he married Lydia Backus, in Wethersfield, Hartford, Connecticut.  She was the daughter of William Backus and Sarah Gardiner.
In 1662, John Bailey was one of the 28 founders of Haddam, Connecticut, aka the Plantation at Thirty Mile Island. 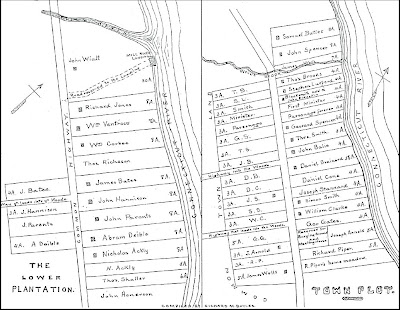 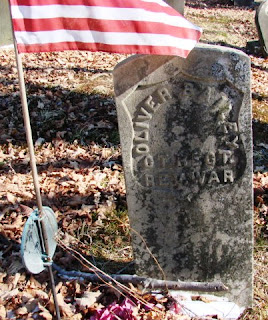 Oliver4 Bailey, son of Ephraim3 Bailey (John2, John1) and Deborah Brainerd Bailey was born June 25, 1738, in Haddam, Middlesex, Connecticut.  He was the fourth generation in America, and was a soldier in the French and Indian War (1755-1762) and the Revolutionary War (1775-1783).  He served under General George Washington in New York, when he fought in the battles of Long Island and White Plains.  He married Hannah Scovell May 14, 1761, in Haddam, Middlesex, Connecticut.  She was the daughter of William Scovell and Hannah Shayler.  After the Revolutionary War Oliver (together with most of his children) relocated (1st in the 1790s) in Lee, Massachusetts, and (2nd after 1804) in Bradford County, Pennsylvania where he died October 14, 1822.  Oliver is buried at Granville Center Cemetery, Bradford County, Pennsylvania.
GENERATION 5
Thomas5 Bailey, son of Oliver4 Bailey (Ephraim3, John 2, John1) and Hannah Scovell Bailey, was born February 11, 1765,  in Haddam, Connecticut.  He married Esther Smith at the New Haven Second Church in January, 1788,  Haddam, Middlesex, Connecticut. He died about 1854, in Bradford County, Pennsylvania.
GENERATION 6
Smith6 Bailey, son of Thomas5 Bailey (Oliver4, Ephraim3, John 2, John1) and Esther Smith Bailey, was born November 3, 1789, in Haddam, Middlesex, Connecticut, and died June 7, 1862, Davis County, Iowa. In 1812, he was a taxpayer in Canton Township, Bradford County, Pennsylvania, when that county was formed.  He married Rosemanty Rogers about 1810 in Canton Township, Bradford County, Pennsylvania. She was the daughter of Zepheniah Rogers (a Revolutionary War veteran) and Elizabeth Rood.
GENERATION 7
Orange7 Bailey, son of Smith6 Bailey (Thomas5, Oliver4, Ephraim3, John 2, John1) and Rosemanty Rogers Bailey, was born March 11, 1811, in Canton Township, Bradford County, Pennsylvania, and died June 18, 1905, in Davis County, Iowa. He 20 children with two wives. He settled in Marion Township, Davis County, Iowa Territory, in 1845.  He died June 18, 1905 in Bloomfied, Davis County. Iowa.  He married (1st) Lydia Waggoner, August 9, 1832, in Clinton Township, Franklin County, Ohio.  Lydia died in 1847.  He Married (2nd) Nancy Good in 1849, in Marion Township., Davis County, Iowa. Nancy Good was born about 1830,  the daughter of Isaac Good III and Juliana Stocker.
See http://a-drifting-cowboy.blogspot.com/2011/10/cowboy-legacy-iowa-territory-1845-to.html for more about Orange Bailey and his descendants.
More about Thirty Mile Island Plantation aka Haddam, Connecticut -- from: Haddam Historical Society:
"In 1660 the Connecticut Colonial Legislature sent Matthew Allyn and Samuel Willys down the Connecticut River from Hartford to purchase land from the Wangunk Indian Tribe at the place the English called 'Land of Thirty Mile Island'. The island, now known as Haddam Island was thought to be thirty miles from the mouth of the Connecticut River at Long Island Sound (it turned out to be only 17 miles from the mouth of river). In May 1662 the Englishmen finally purchased land comprising approximately 104 square miles and extending in six miles on each side of the river from the straits at "Pattyquonck" (now Chester) to the Mattabeseck-Mill River (now Middletown) across to the line of Chatham (now East Hampton). The English paid 30 coats (worth approximately $100) for the land from four Native American chiefs, two queens and others. The Native Americans did set aside some property for their own use including 40 acres at Cove Meadow (Chester) and Haddam Island as well reserving the right to hunt and fish where they pleased.
"Originally there were two small settlements on the west bank of the river, the Town Plot was laid out along the southern end of what is presently Walkley Hill Road and extended to the old burying ground (Burial Yard at Thirty Mile Island Plantation) and the Lower Plantation was settled south of the Mill Creek in the area now known as Shailerville. Each proprietor was given a home lot and land for farming. There was also land set aside for a meetinghouse and ministers lot. In October 1668 town was incorporated and given the name Haddam after Much Hadham in England. Haddam had very little tillable agricultural land and the best farming land was located along the river. Early residents utilized all of the natural resources available to them including water, fish, timber and granite in order to survive.
"The Connecticut River was a major source of income and transportation for the first 200 years of the town existence. Shipyards were built along the river, while many other small tributaries provided waterpower for mills and eventually factories."

Posted by Drifting Cowboy at 7:45 AM