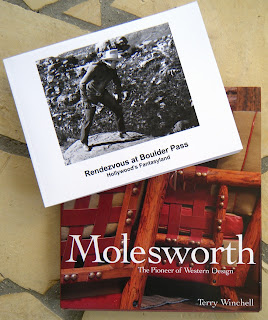 In an earlier post I described my "Cowboy Chic" folk art furniture which had been inspired by the late Thomas C. Molesworth.  See Cowboy Chic -- Lure of the Dim Trails
http://a-drifting-cowboy.blogspot.com/2011/11/cowboy-folk-art-lure-of-dim-trails.html

In another early post I described the Iverson Ranch, which I have been researching and writing about for the past dozen years.  See A primer on the Iverson Movie Ranch
http://a-drifting-cowboy.blogspot.com/2011/11/primer-on-iverson-movie-ranch.html  in that post I told readers about my book Rendezvous at Boulder Pass--Hollywood's Fantasyland,  which examines the history of several filming locations in my hometown Chatsworth, California.  One of the locations to which I had devoted several pages was the Brandeis Ranch.

I wrote the following about the Brandeis Ranch:

What would eventually become known as the Brandeis Ranch was originally homesteaded in 1874 by Niels and Ann Johnson. In the book Pioneer Mother, Ann Johnson’s daughter Lenora J. MacDonald describes the difficulties of trying to farm on land covered with high dense chapparal. “As each acre was cleared,” she writes, “it was planted, then another acre was worked over and planted, then another and another, till the sixty acres of level land was covered with fruitful orchards, thriving vineyards, waving grain fields, luscious vegetables, and blossoming flowers.

After Ann Johnson's death, her sons and daughters kept the mountain home until 1929, when it sold to E. John Brandeis.  However, they held back twenty acres as a memorial to their father and mother, naming the place Fern Ann. Each member of the family had two or more acres.  Today the area is known as Fern Ann Falls.

E. John Brandeis (EJB) was the youngest son of Arthur D. Brandeis, President of J.L. Brandeis & Sons, a drygoods store located in Omaha, Nebraska.  It was the largest department store west of Chicago.  A 1929 newspaper article announced the construction of a half-million-dollar estate to be known as the Open Diamond Bar Ranch.   However, everyone, including the movie production companies, called it the Brandeis Ranch.

EJB was a forceful, energetic businessman with a penchant for outdoor sports, including tennis, polo, and big game hunting.  He traveled in elite social circles, rubbing elbows with movie stars and politicians alike.  When he wasn’t at his Chatsworth ranch or in Omaha on business, he was often on hunting expeditions in India, Africa, Alaska, or some other exotic place. His penthouse home in Omaha, where he stayed a few days every month, was decorated with taxadermied trophies of lions, tigers, rhinos, and bears.

He stocked his ranch with Kaibab deer from Utah, black buck deer from India, white deer from Russia, and a pair of antelope from the Pitchfork Ranch in Wyoming. On one occasion he imported a bison from Montana via railroad and truck.  The bison was supposed to be released high in the hills above the ranch where his sportsmen friends could hunt it; but when two hours of prodding couldn't get the bison out of the truck, in desperation, EJB shot it.

The ranch was located west of, and contiguous to, the Iverson Ranch.  The treeline in the opening scenes of the 1950s Lone Ranger TV Show was the dividing line between the upper Iverson Ranch and the Brandeis Ranch.

Ranch features included a bunkhouse, a caretaker’s house, and a poorly-constructed Western Street, which the local residents nicknamed “Hickeyville.” The Western Street, located in a canyon at Hialeah Springs about half a mile west of the Iverson Ranch entry road, is seen in John Wayne’s Winds of the Wasteland (1936) and in Gene Autry’s The Singing Cowboy (1936).  Filming on the ranch began in 1936 and concluded in the late 1940s. The ranch’s bunkhouse and caretaker's house made their final appearances in The Last Bandit (1947), starring Bill Elliott.

What I did not know when I researched and wrote about E. John Brandeis was that his penthouse home in Omaha was furnished with rustic Western furniture crafted by none other than Thomas C. Molesworth.  Last year (2011) I purchased a book titled Molesworth: The Pioneer of Western Design written by Terry Winchell, published in 2005.   Imagine my surprise when I turned to page 58, and read about the Brandeis Collection that Terry Winchell discovered in the penthouse home in Omaha in 1995!  I had visited Terry Winchell's Fighting Bear Antiques in Jackson Hole, Wyoming many times between 1987 and 1997 and was aware that he was actively searching for Molesworth furnishings.

In Terry Winchell's book, I discovered two of my life's passions (that I had devoted over 25 years studying) had a common link--Thomas Molesworth built furniture for millionaire E. John Brandeis who lived on the Brandeis Movie Ranch in Chatsworth, Califorrnia, my hometown and one of the subjects in my book.  Wow! Talk about six degrees of separation!