Meanwhile back at the ranch -- Miner’s Cabin Tinsley Yarbrough, location expert and writer, stands on the foundation remains of the Miner’s Cabin at the upper Iverson Ranch.  The miner's cabin and fake mine were tucked into another rocky cove just a little west of Hidden Valley and approximately a hundred yards south of Ambush Pass. 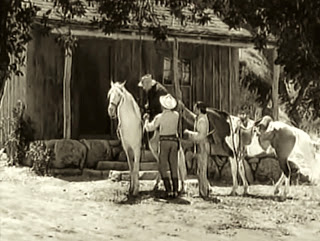 In the screenshot above from an early episode of "The Lone Ranger TV Show" (1949), an old-timer guides the Lone Ranger and Tonto to the secret silver mine from which the Lone Ranger obtains the precious metal for his silver bullets. 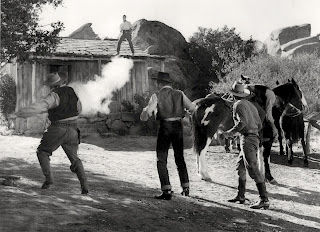 In the still above from Gun Duel in Durango (1957) George Montgomery has the advantage shooting from the cabin roof.  The photo also gives you a glimpse of the rocks to the north that frame the cabin. 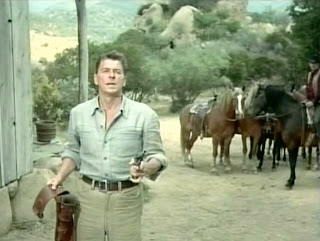 The screenshot above from Tennessee's Partner (1955) gives you a view to the north of the cabin (behind President Ronald Reagan). 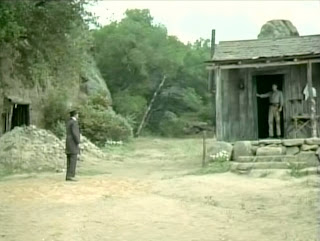 The screen capture above--also from Tennessee's Partner (1955)--gives you a look at the cabin and mine together.  The mine was a false front--made of plaster--that stretched across an opening between two rocks.  Some of the iron hooks that held it in place are still in the rocks today. 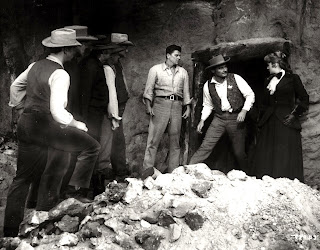 The still above from Tennessee's Partner (1955) (starring Ronald Reagan, John Payne and Rhonda Fleming) gives you a close view of the mine. 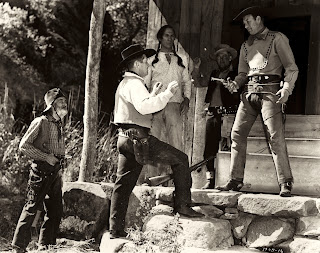 This last still with Gabby Hayes and Wild Bill Elliott from Wagon Tracks West (1943) gives you a close up look at the porch of the cabin.