Meanwhile back at the ranch -- the Slates 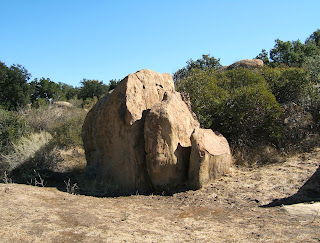 The 'Slates' were a unique rock formation that marked a 'Y' in the trail (chase road) that skirted the rocky ridge on the east side of the upper Iverson Ranch.  They were literally just across the trail from Whale Rock. 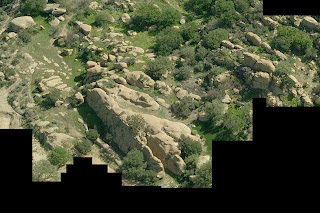 If you look carefully at the upper left corner of the photo above you can spot the Slates.  Whale Rock is to the left.  The most significant 'Rock Stars' on the upper ranch--Whale Rock, the Slates, Totem Pole Rocks, Indian Head Rock, Lookout Point, the Upper Cliff and Eagle Beak are all in the photo.  If the coming days I'll tell you about each of them. 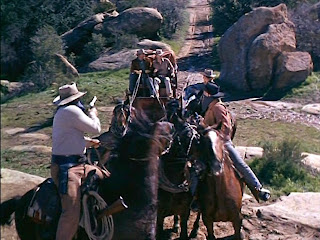 The screenshot above from the "Bonanza TV series" (1962) episode - The Dowry gives you a good look at the Slates and the 'Y' in the trail. 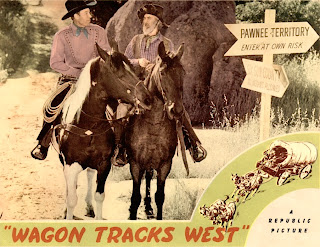 In the lobby card photo above from Wagon Tracks West (1943) Bill Elliott and Gabby Hayes have stopped to palaver directly in front of the Slates. 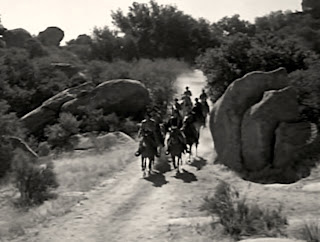 In the screenshot above from Five Guns to Tombstone (1961) (starring James Brown) you can see the Slates on the right, but Whale Rock is just out of the frame o the left. 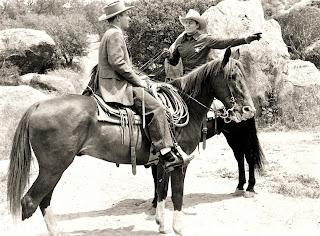 The movie still above from Frisco Tornado (1950) (starring Allan Lane) gives you a final look at the Slates on the right.

Some of the other films you'll see the Slates in are:

Posted by Drifting Cowboy at 7:44 AM