Meanwhile back at the ranch -- upper Stone Cabin 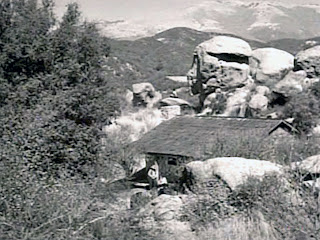 The upper Iverson Ranch Stone Cabin was just south of Turtle Rocks in a rocky cove known as Hidden Valley.  The rocks behind the cabin in the screenshot above--from Prairie Outlaws (1948)--are the best way to identify its exact location. 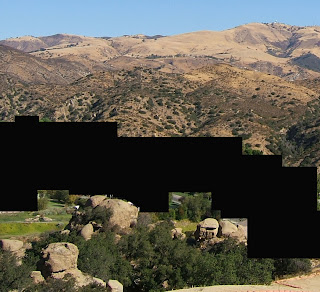 In the redacted photograph above from 2010 (facing north) the rocks right of center in the foreground are the same rocks as those behind the cabin in the screenshot at the top of the post.  As you can guess--Hidden Valley is surrounded by development today.  It's also almost completely overgrown with trees and brush.  Another interesting fact is that the rocks to the left of center are the same rocks seen behind the Miner's Cabin when looking at it from the north. 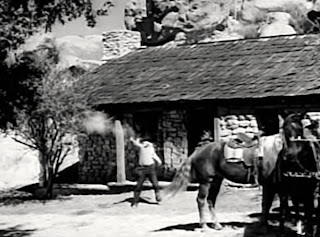 The cabin had a covered porch with a wooden floor, but the exterior walls were stone as you can see in the screenshot above also from Prairie Outlaws (1948). 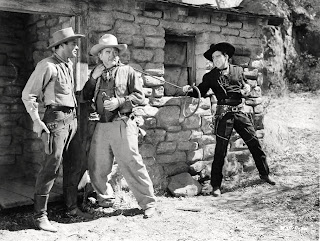 Here's movie still (above) from Son of Billy the Kid (1949) with Lash LaRue collaring a bad guy with his bullwhip. Ouch! 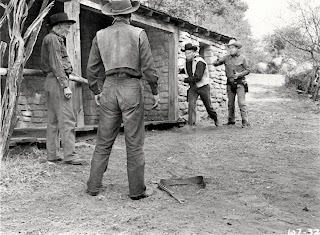 In this still (above) from Bitter Creek (1954) Bill Elliott has the drop on another group of outlaws. 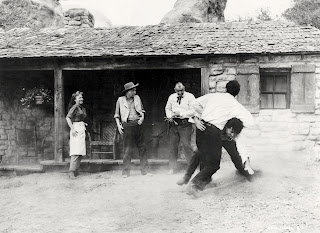 Above is another still from a fight scene in Badlands of Montana (1957).

In a photo from Toughest Gun in Tombstone (1958) George Montgomery and Beverly Tyler are making a stand at the southwest corner of the cabin.