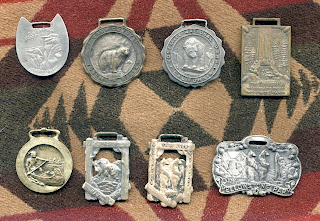 Okay, you could argue National Park souvenirs have nothing to do with cowboys, but then when the park in question is on the edge of cow country in Wyoming, Montana, or California's High Sierra's you could be wrong.  In this post I'll share of my few national parks watch fobs from the early part of the 20th century. 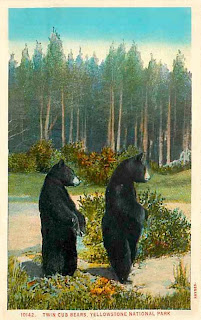 The image became a Yellowstone icon and was reproduced on postcards and other souvenirs for the next couple of decades. 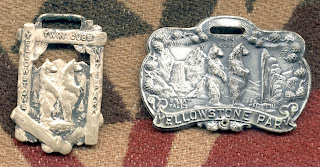 My Yellowstone National Park watch fob and luggage tag featuring images of the famous Twin Cubs were crafted by the Robbins Company in Attleboro, Mass.  Few of these watch fobs, and even fewer of the luggage tags have survived over the past hundred years, so these have become valuable collectibles. 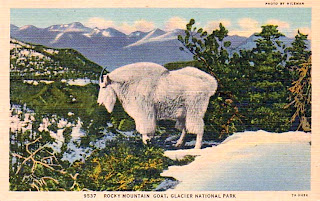 T. J. Hileman was appointed the official photographer for the Great Northern Railway in 1924, and became well known for his exquisite photos of Glacier National Park in Montana. 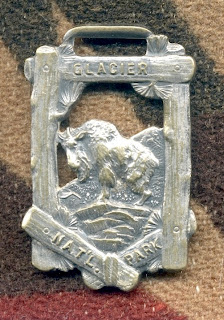 Hileman's image of a Rocky Mountain Goat on the postcard (second) above became the iconic image for Glacier National Park, so it is no surprise it has been reproduced on all sorts of souvenirs including the extraordinary watch fob above. 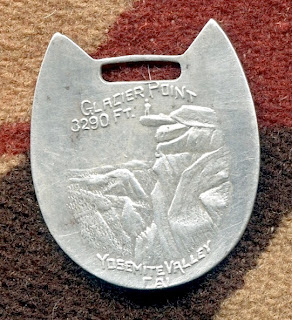 In 1957, my folks moved to a small high sierra hamlet just 13 miles from Yosemite National Park.  It seemed like every summer weekend for the next several years my folks became tour guides for all our relatives, and I became intimately familiar with the extraordinarily beautiful park.

One of my earliest collectibles is the sterling silver watch fob above which depicts a scene of Overhanging Rock at Glacier Point above Yosemite Valley. 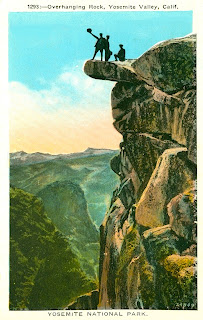 Glacier Point became a famous park location in 1903, when Conservationist John Muir and then President Theodore Roosevelt camped in the area for three days.  The granite outcropping known as 'Overhanging Rock' at Glacier Point has been photographed and reproduced again and again over the past hundred years. 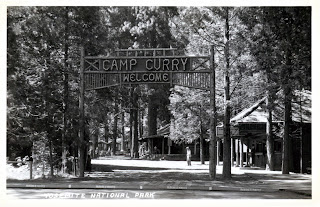 One of the earliest concessions in Yosemite was Camp Curry which was started by David and Jenny Curry in 1899.  Today it is known as Curry Village.  The postcard above is circa 1915. 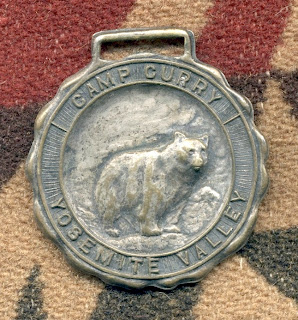 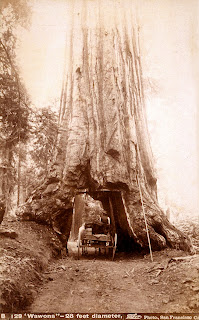 The Wawona Tree (photo above) -- also known as the Tunnel Tree -- was a famous giant sequoia that stood in the Mariposa Grove.  It was 227 feet tall, and had a circumference of 90 feet.  A tunnel had been cut through the tree in 1881, so it became a popular tourist attraction. The Wawona Tree fell in 1969 under a heavy snow load.  It was believed to have been approximately 2,300 years old. 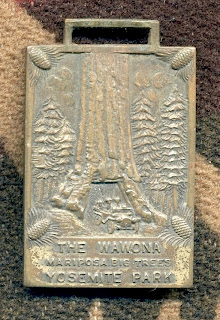 My Wanona Tree watch fob is from the early 20th century as you can tell from the bas-relief image of a 1920s touring car that graces it.

Posted by Drifting Cowboy at 8:23 AM