Great Granddad was a Victorian Coachman 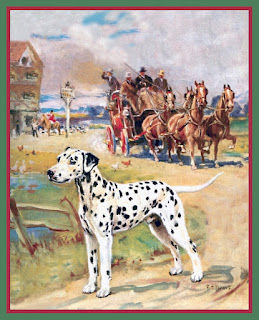 William Avery (1819-1902) was my 2nd great grandfather.  His occupation was that of a Coachman, and historical records suggest he was most likely employed by a wealthy family in Lee Park, Manor Park, or Lee Road in the London suburb of Lee, Kent, England during the the victorian era between 1844 and about 1875.

At age 20, he was listed on the 1841 census as a servant employed at the Chatham Barracks in Gillingham, Chatham, England.  Perhaps he was a stable-boy, groom or even an apprentice coachman.

Three years later, at the time of his marriage in 1844, he was identified as a Coachman on his marriage banns.  Later on Lee and Lewisham, London, England census records for 1851, 1861 and 1871 he is listed as a coachman.

In Victorian London (1837-1901) most people got around on foot.  In fact, a distance of five or six miles -- one way -- was often traveled daily to work, the marketplace, or to church.  Only the wealthy upper class had the means to travel by horse.  Coach travel was not only expensive, but it was sometimes dangerous and almost always uncomfortable.  Roads were poor, streets were crowded, highwaymen roamed the countryside and the costs to own a carriage and horses was excessive.

The actual price of a carriage was not prohibitive, but when you add in the cost of horses, feeding them, a place to stable horses in London, along with wages for a coachman, outriders, and grooms the cost becomes prohibitive for all but the landed gentry and aristocracy.

Duties of the coachman in private employ

The coachman was in charge of the stables in the manor house.  He would possess great skill in driving, and a good general knowledge of horses.  He was responsible for the purchase of feed and grain, and he made sure the horses are properly fed and regularly groomed.  He was required to watch over condition of horses, apply remedies for ailments as necessary, and would report more serious symptoms when he did not have the skill to treat them.  He has expected to clean the coach himself, or see that the stable-boy did it properly.  The coachman was expected to have horses and coach ready to travel within twenty minutes of notice. 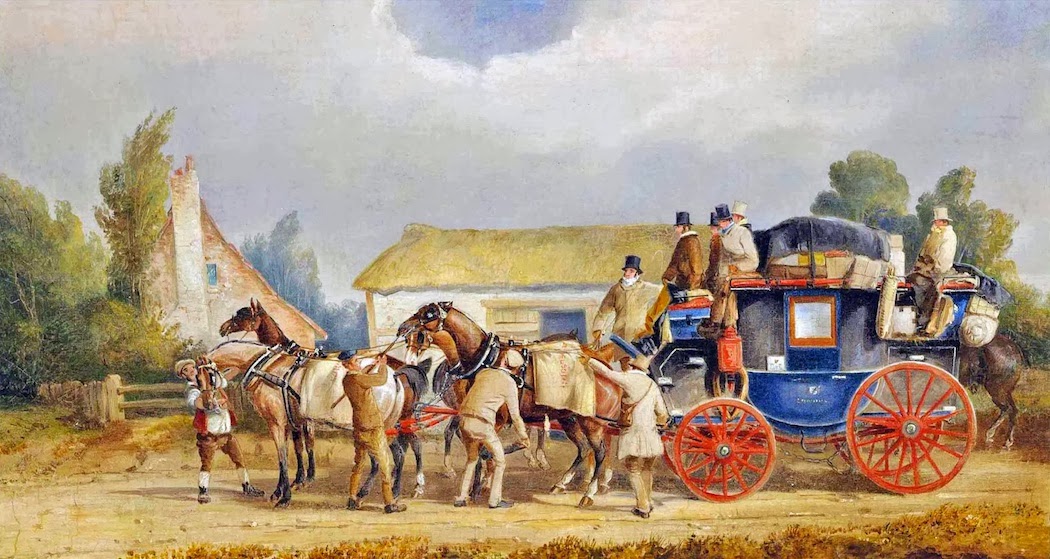 A coach is a large, enclosed, four-wheeled carriage with two or more horses harnessed as a team, driven by a coachman.  Coaches generally had a front and a back seat inside, and a small, elevated, seat for the driver in front called a coach box.  A coach might have a built-in compartment called a boot, and a luggage case for the top of a coach called an imperial.  A coach with four horses was called a coach-and-four, and weighs a ton.  Horses were changed every ten miles.  A coach together with the horses, harness and attendants is a turnout.

There were many different types of coaches including the private 'Road coach', the 'Hackney coach', the 'Clarence coach' (also known as the the “growler” thanks to the noise its wheels made on the cobblestoned streets), the Hansom cab (a fast and nimble transport for gents), and of course the highly romanticized 'Royal Mail Coach' which was used for carrying the mails.

Mail coaches also carried a few passengers, and traveled 100 to 120 miles in a day stopping only to change horses and drop off mail.  Outside passengers (exposed to the weather) paid half the fare of inside passengers. 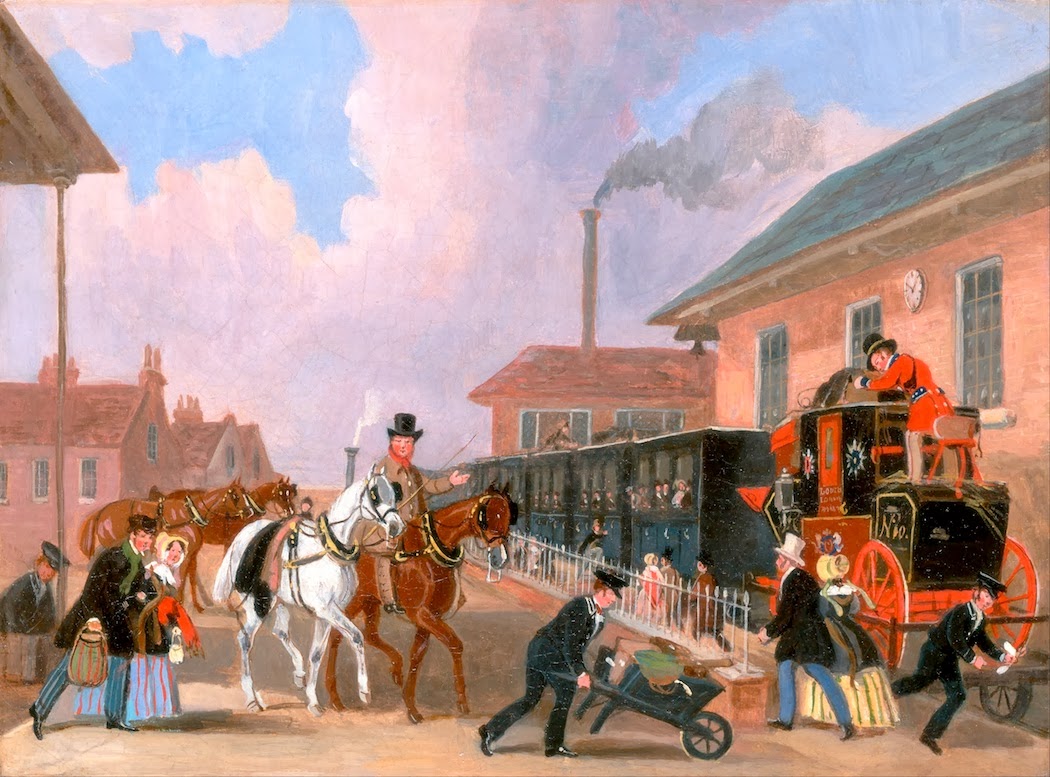 In driving a coach, the coachman used a coachwhip, usually provided with a long lash.  Experienced coachmen never used the lash on their horses. They flicked the whip near the ear of the leaders to give them the suggestion to move on, or cracked it next to their flank to ask for increased speed.

Coachmen and coach passengers might have worn a box coat, a heavy wool overcoat with or without shoulder capes, they were used when riding on the box seat, exposing them to all kinds of foul weather.

A coach horse or coacher is used or adapted for drawing a coach, as it is typically heavier and of more compact build than a road horse.  They were stylish and showed wonderful action.  Coach horse breeds included the Breton, German Oldenburg, Hanoverian, Holsteiner Warmblood, and the Yorkshire Coach Horse. 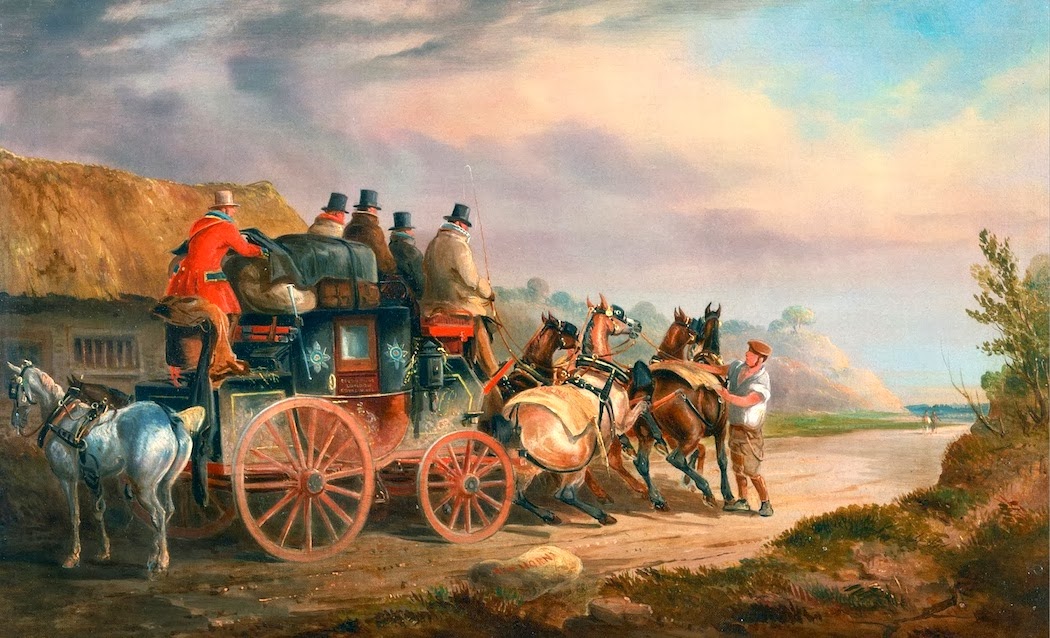 Sometimes an extra horse, called a cockhorse, was led behind a coach so that it could be hitched before the regular team to assist in passing over steep or difficult terrain.

Coaches were sometimes accompanied by a Dalmatian dog (also known as a coach dog or carriage dog).  They would discourage highwaymen and chase off loose animals.

A coach house was a building for keeping a private carriage in and it often also included stabling for the horses and accommodation for coachman, groom or other servants; it was usually an outbuilding on an estate or adjacent to a large house.

A coaching inn, also called coaching house, located along a route followed by horse-drawn coaches, served coach travelers and offered stabling for the horses of stagecoaches and a place to change horses.

Help from a Riding Master?

William had an older brother that was the Riding Master at Hastings St Mary in the Castle in Sussex.  Perhaps he was responsible for helping William become a coachman. 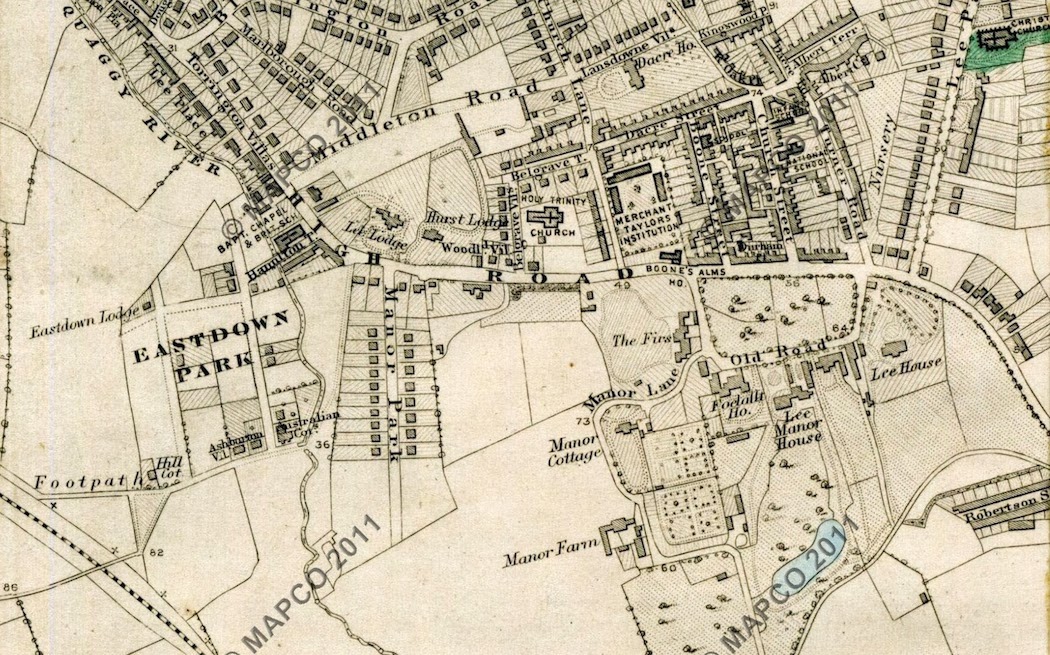 From sometime before 1861, and after 1871 William and his family lived in Eastdown Park very near the Lee Manor House and other English 'Country Houses' in Lee, Kent (the map above is dated 1872). 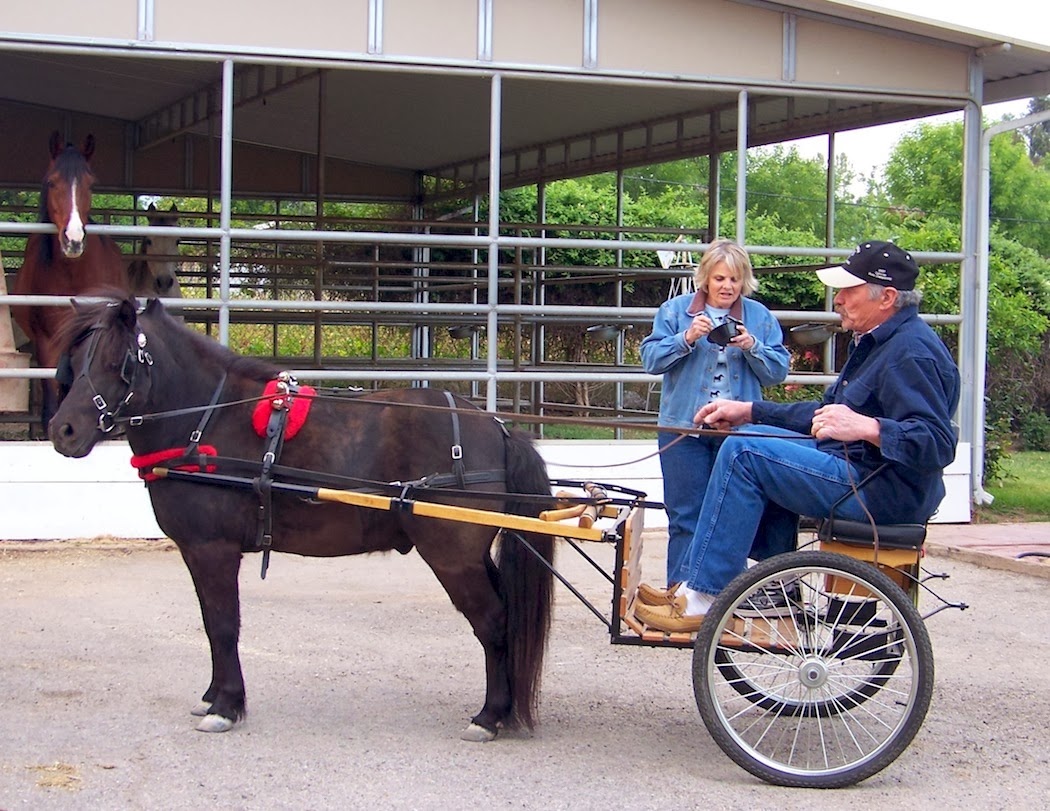 Perhaps my interest in driving a horse has been passed down in the family genes.  The photo above is Biggs, our miniature horse, with his Meadowbrook Cart.

Paintings by Charles Cooper Henderson and James Pollard are in the public domain.
Definitions and historical material are from Wikipedia.

Posted by Drifting Cowboy at 11:19 AM