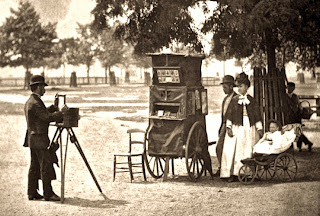 Having your Photograph taken became popular during the Civil War when many young men marched off to war with a brand new photo of their sweetheart or mother in their vest pocket.  Photographing the war made it necessary for photographers to outfit a wagon that could carry their cameras and double as a darkroom.  Thus the idea of a traveling photographer was born.

I have this mental image of great grandma in her sod house out on the Nebraska prairie -- her first baby is about six-months old now, but she knows there's no way she can afford to go visit her family and friends in the east.

Then someone tells her a train with a photographer is coming to town, and that's only two hours away with a horse and wagon.  When she got to the railroad station she most likely found the Hutchings Railroad Photo Car sitting on a siding and open for business for the next week or so. 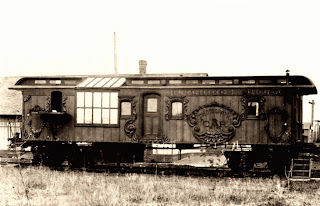 The Hutchings Railroad Photo Car was a train car set up as a traveling photography studio.  They worked along the railroads of Kansas and Nebraska.  Hutchings Railroad photographers advertised in local papers announcing the date of their arrival.  Sometimes they also pass out handbills and put up posters after they arrived. 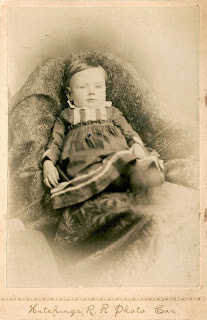 A visit of the Hutchings Railroad Photo Car was a treat not soon forgotten, and left you with a treasure to always be remembered. 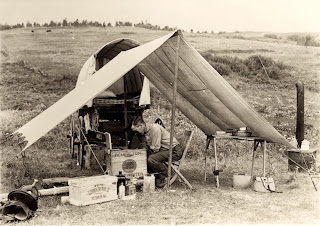 Picture great granddad working on his new barn in rural Montana when a stranger in a horse-drawn wagon comes up the road and pulls into the driveway.

The stranger's helper unloads a camera on a tripod and points it in the direction of the barn. Wanting to know what he's doing granddad climbs off the barn asks about his intentions.

The stranger explains to grandpa that his barn has been selected to be photographed, and that if he'll get the family together they can be included in the photograph -- for the price of $2.50 -- and they'll have a professional photograph, that will impress the neighbors, or can be made into a postcard to mail to kin folks.

At that point grandpa had two choices: 1. Grab your pitchfork and run the stranger off the place or, 2. Call mother, the children and get the new buggy out front and pose. 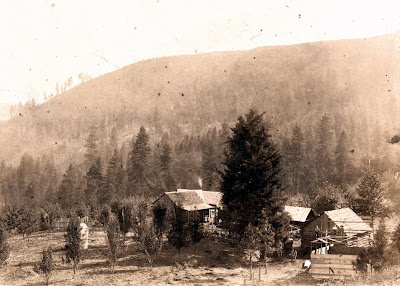 Apparently Abraham Brown decided $2.50 was worth the price of a nice photo of his Creston, Montana homestead. 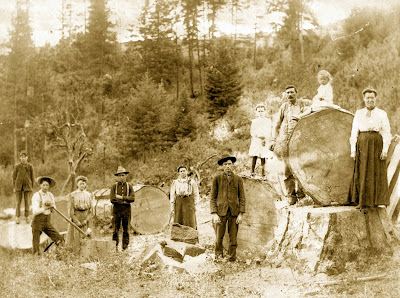 Thank goodness for those early traveling photographers because I've got cigar box full of pictures that are a family treasure to be handed down to future generations.