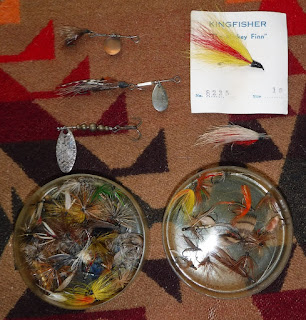 In the 1960s -- while still in college -- I took up fly fishing.  Somehow I though it was a more intellectual approach to fishing.  Maybe it is, but over the years I've discovered my personal favorite way to fish is trolling lures from a canoe.

A few years back I gave my daughter most my fly fishing gear.  Now, I need to tell her just valuable all that stuff is.  She has my old Hardy Bros. rod and reel as well as hundreds of small accouterments and flies I collected over a thirty-five year span. 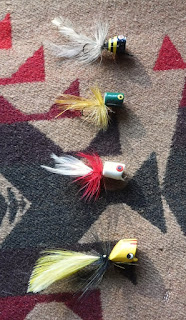 This week I was cleaning out some old tackle boxes that belonged to my dad and me when I came across a bunch of old fly-rod baits and lures that I never got around to giving to my daughter.  I began looking up some of these on Ebay, and I learned that they are every bit as collectible as other lures. 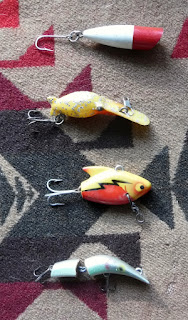 Many small bass plugs in the one to two inch range where made by Heddon, South Bend, Creek Chub, Paw Paw and other manufacturers.  If you're lucky enough to have some in the original boxes you'll find they are worth a small fortune. 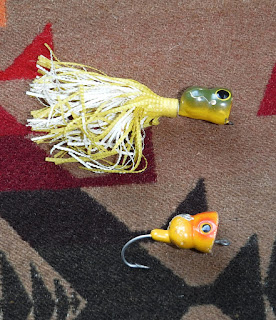 I've always been a big fan of Fred Arbogast's Hula Poppers, so it was no surprise that these two fly-rod lures have been in my tackle box for the past 50 years. 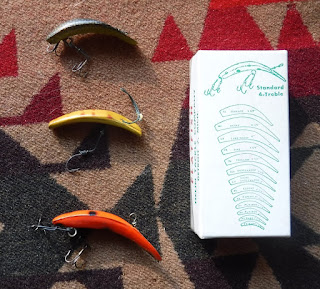 I've never been a big fan of Helin flatfish lures.  Over the years I've probably spent more time untangling 'em than fishing with 'em, but here are a few that I've been dragging along since the 1960s. 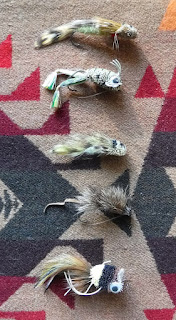 When it gets right down to fly-rod baits that work best for trout you can't beat hair and feathered sculpins, frogs, mice and other baitfish imitations.  I've caught some dandy German Browns on the Owens River by dapping these in the grass along a cut-bank. 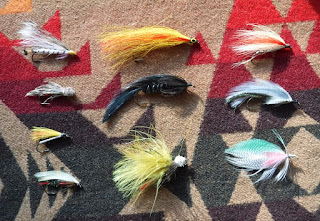 I've also had a fair amount of success with streamers, especially on a sinking fly line trolled behind a canoe. 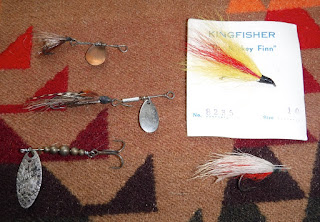 Also for trolling "old timers" often added spinners and other attractor blades to work with flies and streamers. 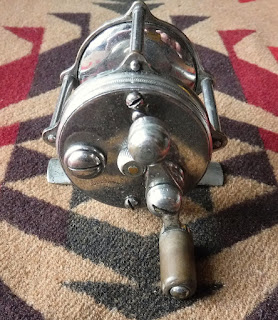 All of these fly-rod baits have been popular with angler's since the nineteenth century when Julius Vom Hofe was making his #4 Trout Reel.

Especially when it come to fishing collectibles.  Small is better because it's always easier to display small collectibles as they require less space in a showcase or on a wall.


Posted by Drifting Cowboy at 5:08 PM