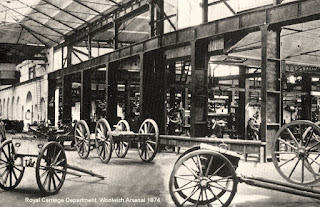 Stephen had been employed in the Carriage Department at the Royal Woolwich Arsenal for 42 years when he retired.  He was the assistant foreman of the department at the time of his departure.

The Kentish Independent Newspaper published an account of Stephen John Head's retirement from the Royal Arsenal as follows:

On Saturday last Messrs. L. M. Lang, E. Edwards, and G. F. Ball, representing the managers and foremen of the Royal Carriage Department, Woolwich Arsenal, met at the residence of Mr, S. J. Head to present a testimonial to him on his retirement after 42 years service.

Mr. Ball, in making the presentation, said he had worked with Mr. Head for over 40 years, and could speak in very high terms of his valuable service. Forty years ago there were only 12 employed in the shop, and at the present time there were 209, and he was sure no shop in the whole of the department had improved more in both quality and quantity of work produced. This was in no small degree due to Mr. Head, particularly when marker-out. He asked him to accept a little token of their regard a cheque and gold watch. The latter was inscribed: Presented to Mr. S. J. Head on his retirement from the Royal Carriage Department after 42 years service from the managers and foremen of the above department as a token of esteem and regard. November, 1917.

In presenting Mrs. Head with a gold brooch Mr. Ball said he was very pleased they had decided to share the testimonial, as woman's devotion was a great feature in the success of men, and he hoped Mr. and Mrs. Head would jog along for many years to come.

Mr. L. M. Lang, in supporting, remarked that he had known Mr. Head for 38 years, and could remember the time when as "Steve Head" he was called upon to do the most particular work in copper, and how as a boy he would stand and admire his work. He always found him ever ready to help anyone in trouble, and he agreed with Mr. Ball that rapid strides had been made in sheet metal work. He congratulated Mr. Head in having such a capable partner, who must have helped him considerably during his life, and he hoped they would live for many years to come.

Mr. Edwards, who followed, said although he had not known Mr. Head as long as the two previous speakers, he could speak with pleasure of his connection with him for 18 years, and he thought after such valuable service for so many years it was tragedy to retire owing to ill-health, and he hoped the time was not far distant when he would be completely restored to health.

Mr. Head thanked the gentlemen for their very kind words, particularly regarding his wife, who was worthy of all good things said of her. He would like to have stayed at work a little longer for the good of his King and Country, but it was not to be. He hoped the gentlemen would convey to all subscribers their sincere thanks for their valuable presents, which they would always look at with pride.

Posted by Drifting Cowboy at 9:24 AM