Cousin Charles Boyer Was a Nor'Wester 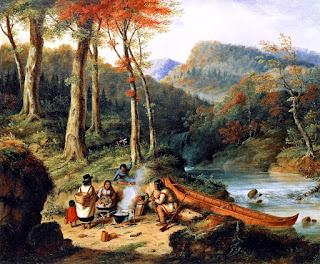 Cousin Charles Boyer - my 1st cousin 8x removed - was the son of Charles Boyer and Jeanne Suprenant (Supernant). He was baptized at La Prairie de la Magdelaine, Nouvelle France in 1744. He was part of an extended family who had been Voyageurs or Coureurs des bois for generations.

Charles was a trader with the North West Company (La Compagnie du Nord-Ouest) from its beginnings in 1779 maybe through its merger with the Hudson’s Bay Company in 1821. When and where he died is unknown. 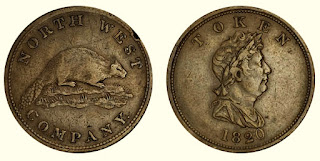 Nor'Wester is a shortened version of North-Wester -- a North West Company agent, Wintering Partner or servant; a trader or engagé who winters in the hinterland; or a veteran of these experiences.

The North West Company had been established in Montreal about 1779, and lasted until it merged with the Hudson's Bay Company in 1821. 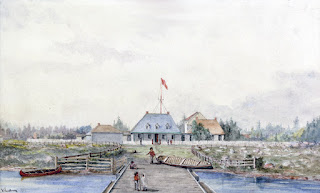 Traders Forrest Oakes, Peter Pangman, Joseph Fulton, and Charles Boyer, were active at Michilimackinac -- as early as1761 -- Sault Ste. Marie, and at Grand Portage near the head of Lake Superior between 1771 and 1781. 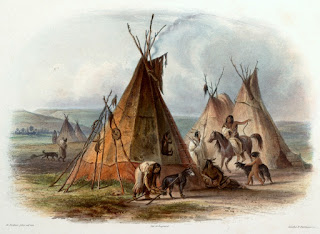 Thomas Correy, Forrest Oakes and Charles Boyer were independent traders from Montreal who established the first Pine Fort probably in 1768. It met resistance from the local Assiniboines who wanted to preserve their middleman status in the trade to the west and south. Following a devastating smallpox epidemic which struck down many of the native people and some of the traders it was abandoned in 1781.

One old source says it was called Assiniboine House. Charles Boyer seems to have been one of Alexander Henry's clerks who, in 1780, was with a trader named Bruce on the Assiniboine River. They were attacked -- in the spring of 1781 -- by a numerous band of Indians, but saved the fort after an heroic defense.

In 1788 Charles Boyer built a Post near the junction of the Boyer and Peace rivers. Other fur traders quickly followed, not wanting to be left out of the area's rich fur harvest. Trapping remained the principal trade of the area's Aboriginal, Metis, and Euro-Canadian inhabitants until the early 1900s.

Boyer's Fort was also known as Old Establishment, and was located on the north side of the Peace River. 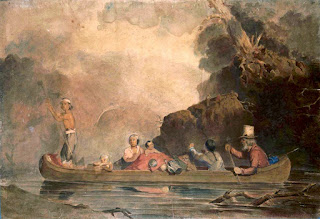 A trip by the Ottawa and Mattawa Rivers was fairly safe from the Iroquois and English attacks but required much portaging. The other route through the upper St. Lawrence and the lakes to Niagara, Detroit, Michilimackinac and Green Bay passed through a long stretch where voyageurs were threatened by Iroquois interference. Voyageurs were primarily in the business of bringing merchandise to central depots and hauling furs from the depots to Montreal.

By the 1670’s, some of the habitants began to fan out to deal with the Indians in their own territories. Called “coureurs des bois,” a name which means “wood runner,” they were seen as outlaws because they traded illegally in the eyes of the French authorities and independently.

They enjoyed the adventure, money, the beauty of nature, and a life free of conformity and the harsh work of farming. Living closely with the
Indians, they adapted to Indian ways and dress, and soon were as skilled as the Indians in the ways of the forest. Most cared little for tomorrow. This lifestyle appealed more strongly to the French temperament than to that of any other European race.

One coureurs des bois reported that “there is no life so happy, none so independent, no place where a man enjoys so much variety and freedom as in the Indian country.” These wandering coureurs des bois were perplexing to the authorities. Even when Louis XIV decreed that the first offense for being a coureurs des bois would be flogging, a second offense branding with the Fleur de Lys, and a third offense punished by life in the galleys or by the death penalty, this mattered little to men who didn’t intend to get caught a first time. Most persons in New France conspired to protect the coureurs des bois from the law. When they were hauled before a judge, they were usually at most fined and turned loose to continue their trade.

Among our ancestors at LaPrairie, most of the able-bodied men were either coureurs des bois or voyageurs, often serving in both capacities at different times. A tradition developed in families where older experienced men cared for the younger sons of habitants. All three sons of Pierre Perras and Denise Lemaitre were involved in the fur trade, as were their sons-in-law, Pierre Poupard, Claude Faye, Jacques Boyer, and Joseph and Eustache Demers.

The involvement of whole families in the fur trade is obvious. Not only was our Deneau ancestor, Jacques, involved but his brother Charles and a total of 19 Deneau family members are listed on 69 voyageur trips. Ten members of the Boyer family, including Antoine, the husband of Marie Perras, his son Charles, and his grandson Charles (the subject of this post) are listed on 31 voyageur trips.

In all 736 contracts of voyageurs are listed for La Prairie residents, while these lists do not include the trips these same men made on their own as coureurs des bois. 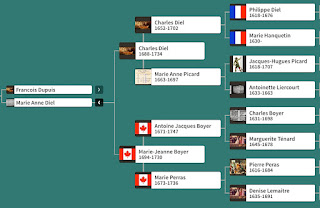 For more about Charles Boyer and his adventures with the North West Company see:

Posted by Drifting Cowboy at 4:00 PM