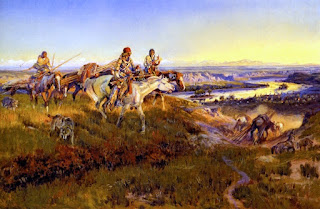 François Rivet, Sr. (my 2nd cousin 7x removed), the son of Nicolas-Pierre Rivet and Marie-Madeleine Gauthier dit Landreville of L'Assomption parish, Quebec, was baptized at the St. Sulpice Church on 7 June 1754.  He was a great-grandson of Maurice Rivet (1642 - 1712), my 8th great-grandfather, who was the first to immigrate to New France (Canada) in 1664.  François died at French Prairie, Oregon 15 Sep 1852, at age 96

François Rivet came from a family of Voyageurs

1780s, According to records in the archives of Quebec, François signed at least three legal voyageur contracts in the 1790s,  Chances are good that he also worked as a coureur de bois during the 1780s and 1790s.

After 1800, François worked his way up Missouri River with other Trappers

Before 1800, François Rivet crossed into the Mississippi drainage and traveled with several seasoned Indian traders and trappers.  They worked their way up Missouri River where they met and learned about Kansa, Omaha, Yankton Sioux, Teton Lakota, Arikara, Mandan, and Hidatsa tribes.

1802-03, St. Louis entrepreneur Regis Loisel took a trading adventure to the Teton Lakota. An engagée called "La Riviere" was nearly shot by the Bois Brulé band. This was most likely François Rivet, who then returned to St. Louis, with Loisel, the following spring. 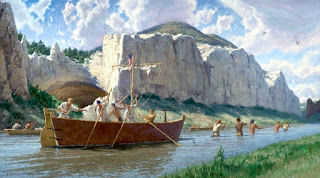 Captains Meriwether Lewis and William Clark and The Corps of Discovery

1803-04, Winter - St. Louis entrepreneur Auguste Chouteau obliged Captains Meriwether Lewis and William Clark by engaging eight voyageurs to paddle a cargo pirogue. Three others were hired to assist the soldiers in working a keelboat. Pierre Cruzatte le borgne (one-eye) would be the bowman while François Labiche set the stroke as the first oar.

The third, François Rivet, joined the expedition at St. Charles, but agreed to go only as far as the Mandans. The Corps of Discovery wintered at the Mandan/Hidatsa villages that year.

1804, November - Francois, and three others: DeChamps, Malboeuf and Carson, were discharged, so they built a hut of their own next to Fort Mandan, and remained there under the protection of the expedition during the winter of 1804–05.

1805, Spring - François and Philippe Degie, who had attached himself to the party on October 18, 1804, built a canoe of their own and descended the Missouri with Warfington's return party as far as the Arikara nation.

1806 - When Lewis and Clark returned from the Pacific they found Francois Rivet living among the Mandans. 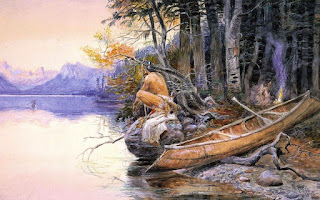 Mountain Man and Trapper in the Pacific Northwest

1807, September - John Mcclellan, Francois Rivet, and a large party of American and Canadian independent trappers (perhaps including Charles Courtin, Registre Bellaire, and Michel Bordeaux dit Bourdon) encamped in the Bitterroot Valley. McClellan sent word to Thompson of the Northwest Company (then on the Columbia River) not to encroach on their Bitterroot trading territory.

1808 - Rivet was with Captain McClellan when he explored the Clark Fork River and identified a practical route between the Missouri and Columbia river.

1807-08, Winter - Rivet escaped when eight men of the Bitterroot camp, including the leader John McClellan, were killed in a battle with Blackfeet or Gros Ventres.

1808, Winter - François Rivet was short on ammunition and obliged to trade with the North West Company. The British leader, David Thompson, had set up an outpost at the falls of the Kootenay River.

1809 - Perhaps François Rivet was with Manuel Lisa's trading company, while he was in the Flathead country of northwest Montana. 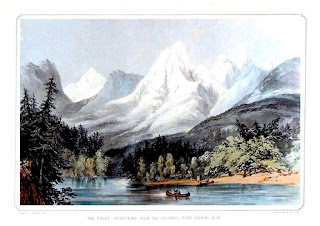 1809, François was making a living trapping beaver when he formed a country relationship with a young Flathead (some say Salish) widow who was later identified in Catholic mission records as Therese Tete Platte. She had married a neighboring tribesman when she was about 19 and had a baby girl before she entered the relationship with François. The couples' first child received his father's name, François.

1813 - François was now employed by the North West Company and living among the Flatheads.  He was still there in 1824, working as both trapper and interpreter. 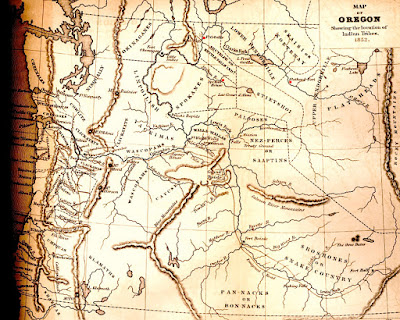 1811, June - David Thompson was under orders to descend the Columbia River and confirm an arrangement with the rival Pacific Fur Company. En route from Spokane House to the departure point at Kettle Falls, Thompson found the Rivet family camped along the trail with four tents of Indians.

1813 - Competition between the North West Company and the rival Pacific Fur Company provided François Rivet with a competitive market. Until the two staffs merged in 1813-14, François Rivet kept to a middle ground.

In a list compiled at Astoria, François was described as a freeman hired for one year as an interpreter for 600 livres an arrangement that continued at Spokane House until 1816.

1818 - François Rivet and his family continued to tent and travel with the Salish.

At Spokane House in the fall of 1818, the North West Company trader Peter Skene Ogden set up with Rivet's young step-daughter, Julia. Their son Charles was born on September 5, 1819.

1821, The North West Company and Hudson's Bay Company finally gave up their unproductive rivalry and formed a new organization.

1824 - François joined the Alexander Ross Snake Country brigade of 140 trappers operating from Boise to Bear Lake and the upper Snake in the Yellowstone Park region. In Ross' journal Francois Rivet is described as an interpreter owning 2 guns, 6 traps, 15 horses and 1 lodge

When Ogden took the lead of the Snake River Expeditions his goal was to trap all of the beavers in the region - including most of the southern part of Idaho - jointly held by the U.S. and Britain.

It was a "scorched earth" policy to discourage rival American trappers from wanting to invade what Hudson's Bay Company considered their hunting domain.

On the first expedition, Ogden took his family with him in a party of 120 men, women and children, which included Julia's stepfather Francois Rivet. 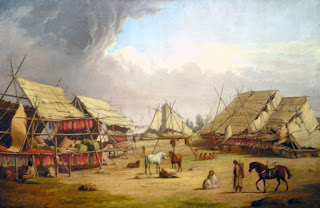 1829 - Francois Rivet, now known as "Old Rivet," transferred to Fort Colville on the upper Columbia, and in 1832, at the age of seventy-five, he was placed in charge of the post by the Hudson's Bay Company.

Fort Colvile (also Fort Colville) was built by the Hudson's Bay Company at Kettle Falls on the Columbia River in 1825 and operated in the Columbia fur district of the company.

1838 - Francois Rivet had been employed by the Hudson's Bay Company from 1821 to 1837, and in 1838 Francois retired and settled at French Prairie in the Willamette Valley, Oregon.

The same year, 1838, saw the arrival of the Catholic fathers in the Willamette Valley, Old Rivet and Therese Tete Platte were among several dozen couples married formally in the "big wedding" immediately instigated by the priests. Thereafter Francois Rivet appears regularly in church records as godfather to children of his old companions or as witness to their marriages.

Prior to the land laws of 1850, while sovereignty of the Oregon country was still in abeyance, settlers merely laid claim to any unoccupied area to their liking. Rivet chose a tract south of the St. Paul Mission, apparently sharing it with his sons Antoine and Joseph, who were now farmers on the Prairie with families of their own.

Francois Rivet's name does not appear as a taxpayer in 1844 nor on the census roll of 1850, yet he was certainly living on his claim on those dates.

Among the disputed lists of voters at the Champoeg meeting in 1843 his name is never given as one of those present, but he was one of three vice presidents at a meeting the following year, when a memorial, commonly known as "The French Petition" was addressed to Congress, asking for some assurance of governmental interest in Oregon and protection against Indian uprisings.

Sign-Talker: The Adventure of George Drouillard on the Lewis and Clark Expedition

French Canadians, Furs, and Indigenous Women in the Making of the Pacific Northwest

By Honor and Right: How One Man Boldly Defined the Destiny of a Nation

Collections of the State Historical Society of Wisconsin

"Names of people in the West, during the Fur Trade"

Posted by Drifting Cowboy at 2:26 PM