Jean was also a brother of two famous voyageurs: Andre and Charles Mignier dit Lagassé, both of whom used the Lagassé surname.  Both of these brothers traveled with the famous explorer, map maker David Thompson.

This family descends from Andre Migner (Meignier, Meunier, Minier) dit Lagacé (Lagassé) a French soldier assigned to the Carignan-Salières Regiment that had been sent to Quebec in 1665 by King Louis XIV to protect the French settlers from marauding Iroquois Indians.  In the army he was called by his nickname or noms de guerre, "La Gachette", which means "trigger" and is used to describe someone who can shoot with great ability -- a sharpshooter.  La Gachette eventually evolved to be Lagacé.

This family is difficult to track because of the many different spellings of both the surname "Meunier" and the dit name (called, said, or also known as) "Lagacé."

For whatever reason it appears the Lagassé name was dropped by Jean-Baptiste Meunier and some of his descendants.  However, a great-grandson, George Pinsonneau (changed to) Pierce identified his mother Marie Emélie Meunier (1808–1883) as a Lagassé many years later.


Trading with the Poncas

[Translation: Two years later, Jean Meunier reached the Poncas village at the mouth of the Niobrara and may be made ​​by grant Carondelet , governor of Louisiana , the exclusivity of trade with this nation for a four-year period starting in 1794.]

[Translation: Jean-Baptiste Meunier, from Vercheres , settled in St. Louis before 1789 , the year he would have been the first white man to discover the Poncas located 400 miles upstream from Missouri. In 1794 is exclusive holder of license deals with this nation. Trudeau to meet again (see sheets 53, 55, 71 and 76 of the manuscript ) . Meunier was more engaged . In some names are spelled Menier , Monier or Munier.] 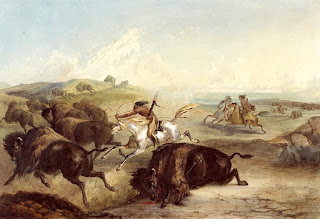 From: French-Canadian Trappers of the American Plains and Rockies (http://www.ameriquefrancaise.org/en/article-363/) (edited)

There were the settlers of French-Canadian origin operating in the Illinois country. They plied the Missouri River and other tributaries of the Mississippi deeper into the South, seeking additional fur-trading opportunities.

It must also not be forgotten that there were a large number of subordinates, regular employees, from both small and large companies, as well as the self-employed, all of whom worked to assure the day-to-day operation of the fur-trading industry.

In the last decade of the 18th century, Jacques d'Eglise, Pierre Dorion, Pierre-Antoine Tabeau, Joseph Gravelines, Jean-Baptistes Meunier, Joseph Ladéroute, and Pierre Berger were all involved in operations along the Missouri, as were literally hundreds of others during the decades that would follow.

These are characters who have all long disappeared without a trace, except for their names written in various ledgers-the only written record left in a world where illiteracy reigned supreme.

From: Archaeology at French colonial Cahokia, by Bonnie L. Gums

1794 to 1809 - Jean Baptiste Meunier (Munier); a records search in the Illinois State Archives and the St. Clair County Archives failed to locate any notice of sale by Meunier after 1809.

From:  Prologue to Lewis and Clark: The Mackay and Evans Expedition, by ‪W. Raymond Wood‬
Eight years later, in 1793, the trader Jean Baptiste Meunier (or Monier) claimed that he was the first European to visit and "discover" the Ponca.  He and his partner, Jacques Rolland, nevertheless dealt with them from a trading house they established near the Ponca village.

From: Before Lewis and Clark: Documents Illustrating the History of the Missouri, 1785-1804, edited by ‪Abraham Phineas Nasatir‬
See the letter from Meunier And Rolland to Carondelet, St. Louis, 1794. 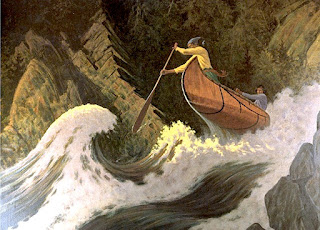 
An exciting new find about Jean-Baptiste Meunier (Mignier or Minier) dit Lagassé (Lagacé) (1749–1828), my 5th great-grandfather.
We know he was a fur trader trading with the Ponca Indians circa 1789-1799, and we have found many different references with his name spelled various ways (Monier, Munie, Meunier, etc).
The Ponca village was generally located on the Missouri River at the confluence of the Niobrara River.
Today I found a copy of "The Spanish regime in Missouri" by Louis Houck, published in 1909. In it he is called Juan Munie.
I've copied the following three pages that represent his license to trade with the Poncas given by the Spanish government... 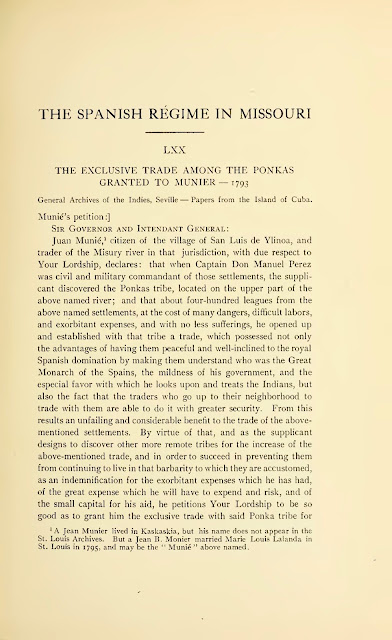 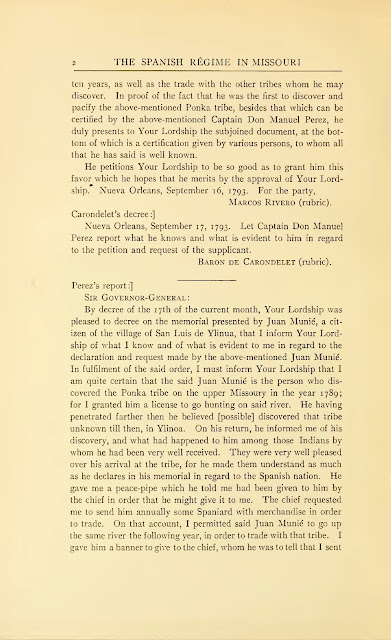 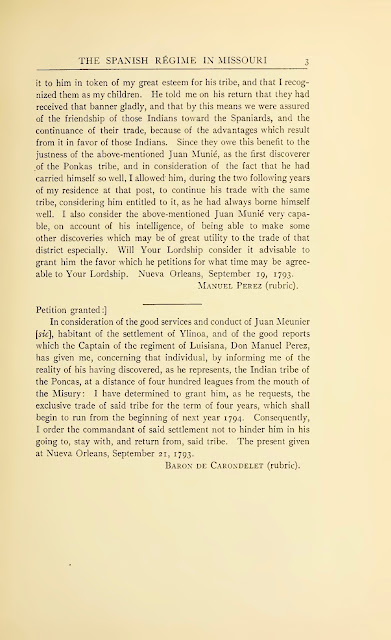