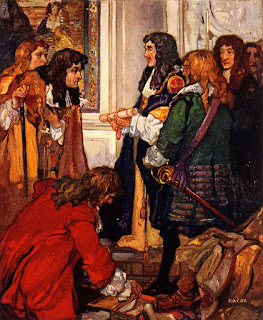 On May 2, 1670, King Charles II granted the Royal Charter to the “Governor and Company of Adventurers of England trading into Hudson Bay” (aka Hudson’s Bay Company) and appointed his cousin, Prince Rupert, as the first Governor of the Company.

At the time of its founding, many of the original shareholders of the Company were senior figures in Charles’s government.

An interesting charter term set by Charles was the Rent Ceremony: a requirement of a periodic rent of two beaver and two elk in the unlikely event of the Sovereign visiting Rupert’s Land.

On this sumptuous silver medal, Charles wears classical armor as if he were an ancient Roman emperor and is wigged in the elaborate style made fashionable by the absolute monarch, Louis XIV.

The inscription on the medal’s front (obverse), “King, by the grace of God” and on the reverse’s royal coat of arms “God and my right” allude to the divine right of kings. 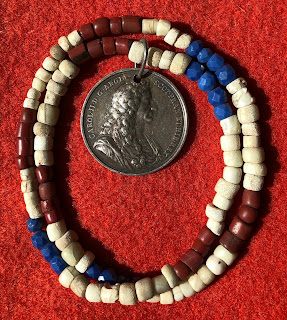 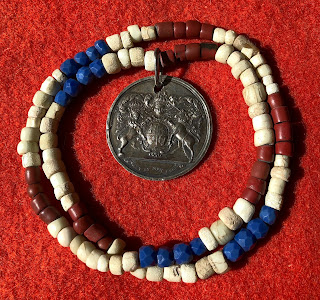 Reverse:
-Inscription on Order of the Garter: HONI . SOIT MAL Y PENSE (Spurned be the one who thinks evil)
-Inscription on ribbon in exergue: DIEU . ET . MON . DROIT (God and my right)

After his Restoration to the throne of England, Charles II (b. 1630; r. 1660-80) governed under a constitution with an elected parliament. Charles nonetheless promoted the monarchy’s centrality and prestige by having the imagery on his coins and medals project royal power.

I BELIEVE IT’S HIGHLY LIKELY SOME OF THESE MEDALS WERE PRESENTED TO ORIGINAL SHAREHOLDERS OF THE COMPANY OF ADVENTURERS OF ENGLAND TRADING INTO HUDSON BAY.

Perhaps some of them also found their way into the hands of First Nations People in Canada.